The Biden regime mendacity is at a crisis level 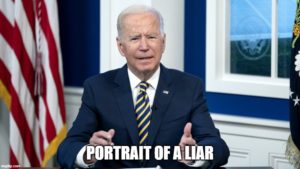 The Biden regime is disintegrating before our eyes. Joe Biden is the titular President but he is NOT in control of anything. He is a puppet, a marionette manipulated by someone else. Worse, led by Jen Psaki (Little Miss Lying Hood) the White House is not spewing nothing but lies and propaganda.

Here is Biden with Boris Johnson. Watch his reaction when Johnson asks if they could take a couple of questions.

And just before that

Before the sudden interruption…

PM JOHNSON: “Would it be OK if we had a couple of questions? Just a couple?”

This is not unique. There is a pattern of Biden’s mic being cut off when he attempts to entertain questions. That is, when he is not simply walking away from uncomfortable questions.

Not knowing who is really making the decisions is a major issue for the country but it’s not the only one. The Biden regime is lying non-stop and on a grand scale. Jen Psaki was rightfully asked why illegal immigrants aren’t mandated to receive a COVID vaccine when Biden angrily demands that American citizens be vaccinated. She said it’s because they are not planning on staying in country.

Biden W.H.: Unlike Europeans, illegal immigrants don’t need to prove vaccination status because they “are not intending to stay here” pic.twitter.com/sgJYVYo54d

That is an utter lie as pointed out by Bill Melugin, who notes wryly that Little Red Lying Hood has no idea of what she speaks:

If anyone in the White House actually came down here and spoke to some migrants, they would realize these people have zero intention of leaving the US & every intention of trying to stay permanently. You don’t travel that far to spend a day or two in Del Rio & then leave. https://t.co/4W60UcI6W5

The Haitians, just as the rest of the invasion party, have no intention to leave. DHS Secretary Alejandro Mayorkas, another galactic liar, rushed to the border to feed the left wing media morons some junk food, telling them that there would be mass deportations of Haitians.

“We have sent a very clear message early on in light of the fact that we are in the midst of a pandemic, that the border is not open and people should not take the perilous journey here. We are returning people to other countries.”

They’ve returned but a few hundred as a distraction while releasing Haitians into the country on a ‘very, very large scale.’ It’s so bad that even left wing reporters note it

“Accounts of wide-scale releases — some observed at the Del Rio bus station by Associated Press journalists — are at odds with statements a day earlier by Homeland Security Secretary Alejandro Mayorkas, who traveled to Del Rio to promise swift action.” https://t.co/ZiAk2MMGv1

No kidding at odds with his statements. Mayorkas is a despicable liar. Psaki is a liar. Biden is a liar. COVID positive illegal aliens are being dumped on cities and towns all over the nation. Biden’s first Border Patrol Chief minced no words in blasting Biden:

In a stunningly blunt warning to senators, President Joe Biden’s just-departed Border Patrol chief is accusing the administration of intentionally eroding security to bring illegal aliens into the country and misleading Congress about the severity of the crisis.

Rodney S. Scott, a 29-year career law enforcement officer who retired last month as the U.S. Border Patrol chief, wrote the Democratic and Republican leaders of the Senate and its Homeland Security and Governmental Affairs Committee that career experts have offered numerous recommendations to slow the crisis but have been repeatedly rebuffed.

“Common sense border security recommendations from experienced career professionals are being ignored and stymied by inexperienced political appointees,” Scott wrote in the letter sent earlier this month and obtained by Just the News.

“The Biden administration’s team at DHS is laser-focused on expediting the flow of migrants into the U.S. and downplaying the significant vulnerability this creates for terrorists, narcotics smugglers, human traffickers, and even hostile nations to gain access to our homeland,” he wrote Sens. Chuck Schumer, Mitch McConnell, Gary Peters and Rob Portmann in a letter dated Sept. 11.

And there’s more good news. Biden plans to import ten times as many illegals next year. The big question is who is going to pay for their financial support and education?

The answer is YOU. It is a non-legislated tax. It is a burden that will impact lower income earners in particular who will be shut out of jobs when large corporations hire illegals on the cheap, which is why democrats are so bent of handing out green cards. These illegals will also be accompanied by COVID which will then spread into the victim towns and cities they are dropped into.

The Biden regime mendacity has spilled over into our foreign relationships. France is now angry at the US for what it calls “duplicity.”

Welcome to the club.

The lying by this regime is at a crisis level. There is no longer any defending it although you can count on cretins like Joy Reid to continue to try. Virtually nothing Biden or his regime say is true. We still don’t know who is pulling the strings on Biden.

BTW, deported Haitians are attacking the pilots and ICE agents on their flights. Sorry to see them go.

Is there any other kind?