Fentanyl: lethal to everyone except for George Floyd 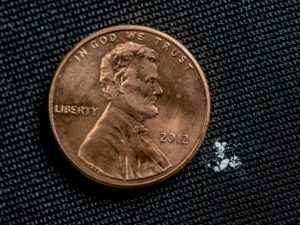 Fentanyl is a very powerful synthetic analgesic opioid. The DEA describes it this way:

Fentanyl is a synthetic opioid that is 80-100 times stronger than morphine. Pharmaceutical fentanyl was developed for pain management treatment of cancer patients, applied in a patch on the skin. Because of its powerful opioid properties, Fentanyl is also diverted for abuse. Fentanyl is added to heroin to increase its potency, or be disguised as highly potent heroin. Many users believe that they are purchasing heroin and actually don’t know that they are purchasing fentanyl – which often results in overdose deaths. Clandestinely-produced fentanyl is primarily manufactured in Mexico.

The DEA is being more than little misleading here. Fentanyl is a big Chinese export:

Mass quantities of fentanyl, a low-cost and highly potent synthetic drug, are being produced in China and brought illegally to the United States, contributing to a growing U.S. opioid crisis. The rise of fentanyl in the United States can be traced back to China’s large chemical and pharmaceutical industries, which manufacture vast quantities of the drug and its analogues to export to the western hemisphere with little regulatory oversight. This report examines how China’s illicit chemical production and inefficient U.S. and international counternarcotic efforts have contributed to dramatic increases in fentanyl-related deaths in the United States.

Fentanyl is a dangerous drug. It is lethal in very small doses.

The estimated lethal dose of fentanyl in humans is 2 mg. The recommended serum concentration for analgesia is 1–2 ng/ml and for anaesthesia it is 10–20 ng/ml. Blood concentrations of approximately 7 ng/ml or greater have been associated with fatalities where poly-substance use was involved.

Fentanyl overdoses have claimed the lives of many Americans. Among them are Logan Williams and Colt Brennan.

Logan Williams was an up and coming young actor who played The Flash on a TV series:

The actor, who played the main character Barry Allen during flashback scenes in the show’s first two seasons, died on April 2, 2020—the week before his 17th birthday on April 9. Williams, who was a British Columbia native, died from “unintentional illicit drug toxicity (fentanyl),” according to a coroner report seen by The New York Post on Wednesday.

“Toxicological analysis detected fentanyl in a range where lethal outcomes have been reported,” the coroner’s report said. “Even small amounts of fentanyl have been shown to be potentially toxic.”

Yes. Lethal in small amounts. The picture above shows a lethal dose of fentanyl.

Colt Brennan was one of greatest college quarterbacks ever:

Brennan was a standout football player at Hawaii. In 2006, he completed 72.6% of his passes while throwing for 5,549 passing yards and 58 touchdowns. His passing yards total from that season is currently the seventh-most in FBS history, and his eye-popping touchdown total was a record until current Cincinnati Bengals quarterback Joe Burrow threw for 60 scores in 2019 for LSU.

Brennan died from a fentanyl overdose:

The toxicology report showed that Brennan ingested fentanyl and other dangerous substances, which ultimately led to his death. Methamphetamine, amphetamine and ethanol were also found in his system.

There have been an estimated 93,000 drug overdose deaths in 2020 with fentanyl being a key participant. By 2018 fentanyl had become the “drug most often involved in fatal overdoses across the United States.”

Fentanyl kills in small amounts. Unless, of course, you are George Floyd.

George Floyd had a blood level of 11 ng/ml when he died. Prosecutors had a field day gaslighting the jury about fentanyl levels. They spoke of Floyd having fentanyl “tolerance” because of his long term abuse of the substance. What they deflected away from the jury was the effect of this level of fentanyl combined with Floyd’s severe cardiovascular disease.  A defense witness had it right

Dr Fowler listed a multitude of potential factors: Mr Floyd’s narrowed arteries; his enlarged heart; his high blood pressure; his drug use; the stress of his restraint; the vehicle exhaust; and a tumour or growth in his lower abdomen that can sometimes play a role in high blood pressure by releasing “fight-or-flight” hormones.

Former NYC Coroner Michael Baden, for whom I have lost all respect, said that Floyd’s heart disease was “minimal.”

“In my opinion, if he had heart disease, it was minimal, didn’t cause or contribute to the death,”

This is not only false, it is despicable. He didn’t even examine Floyd’s entire heart. It was a political opinion, not a scientific one. This is from Columbia Heart Surgery:

A coronary artery must be narrowed to less than 30% of its original size before there is a serious reduction in the blood flow to the heart muscle served by that vessel. Generally, about 5% of the total cardiac output of blood goes through the coronary arteries; thus there is adequate coronary blood flow to meet normal demands at rest even if the vessels are 70 to 90% occluded. If the coronary arteries are seriously blocked, however, blood flow may not be adequate for any increased demand, such as that of exercise or an emotional upset. If the heart muscle cannot get enough oxygen—a state known as myocardial ischemia—symptoms such as chest pain (angina) or shortness of breath may result.

Fentanyl is a CCP money making project and the CCP is busily exporting it to the US via Mexico. So what is Biden’s plan? To reduce penalties for trafficking fentanyl.

That’ll be a big help.