AOC is absolutely full of crap The Met Gala is an entirely exclusive event attended by pop stars, actors, musicians, and scores of millionaire famous people with an estimated ticket costing $35,000 on an invitation-only basis. Noted The Cut:

It’s big money and a lot of celebrities. Even if you can afford a $35,000 ticket, you have to be approved by Wintour and placed by Vogue at a table. The seating chart is normally drafted in December, a full five months before. They take into account where people and their exes are sitting, and who can see whom, and place everyone individually.

The dress was designed by Aurora James

The congresswoman’s dress was reportedly designed by Aurora James of Brother Vellies, who has an estimated net worth of $9 million. Speaking with Vogue, James, founder and creative director of Brother Vellies and the founder of the 15 Percent Pledge, said she wanted AOC’s statement to “push the country forward.”

“We can never get too comfortable in our seats at the table once they’ve been given,” James said. “We must always continue to push ourselves, push our colleagues, push the culture and push the country forward. Fashion is changing, America is changing.” 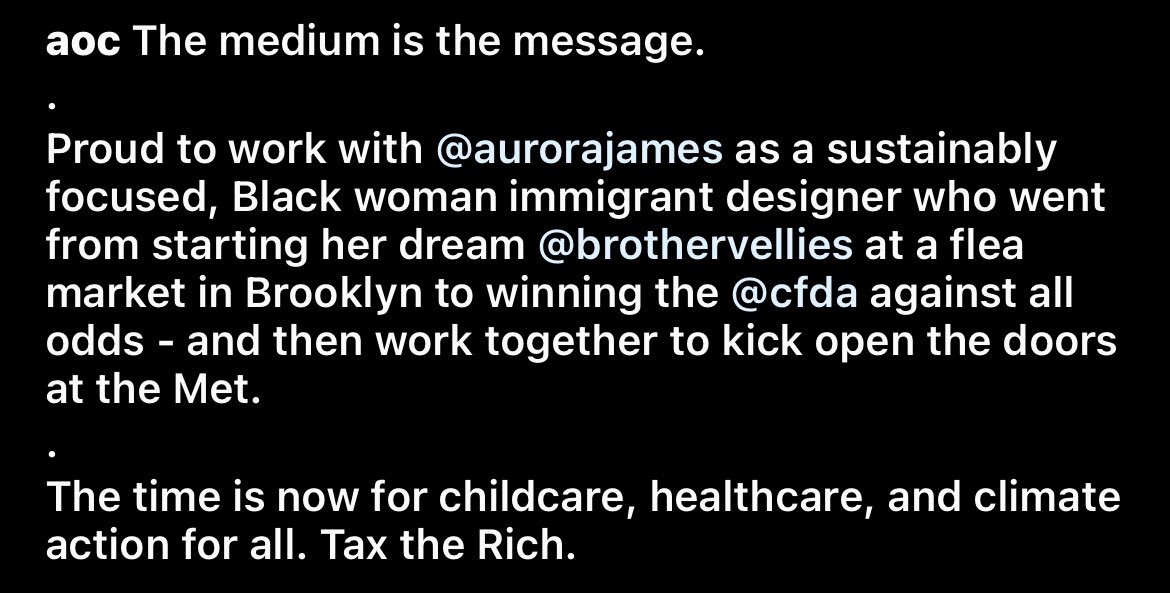 Toronto-native and New York City-transplant, Aurora James is the Creative Director and Founder of luxury accessories brand Brother Vellies. Founded in 2013 with the goal of keeping traditional African design practices and techniques alive, while also creating and sustaining artisanal jobs, Brother Vellies is now handmade across the globe.

I might be missing something but that gown doesn’t look African to me. I have seen no mention of the value of the gown.

About her appearance, which has drawn some heavy criticism, Cortez tweeted this:

And before haters get wild flying off the handle, New York elected officials are routinely invited to and attend the Met due to our responsibilities in overseeing and supporting the city’s cultural institutions for the public. I was one of several in attendance in this evening.

It’s her responsibility to party with wealthy elite! She went to a $35,000 per ticket affair to stick it to the man? That’s some comedy gold right there.

Here she is in action making the rich pay:

NEW – Democrat Rep. AOC wears a “Tax The Rich” dress at #MetGala, where a ticket costs $30,000 to attend.pic.twitter.com/V9B7UGoGX5

She was torched for this audacious display of hypocrisy

Did someone say masks? 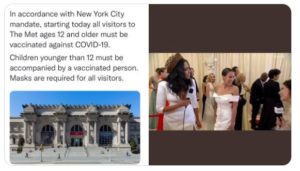 The truth is that Cortez is just another phony using her “tax the rich” theme as an excuse for her to cruise shoulder to shoulder among the bourgeoise. Her single most notable achievement was to ward off 25,000 Amazon jobs from her district. Now she’s a celebrity and she is enjoying every second of Hollywood type attention while thinking she’s fooling us all. She’s an idiot.

But her hypocrisy has spawned some pretty funny memes. This from holla boy 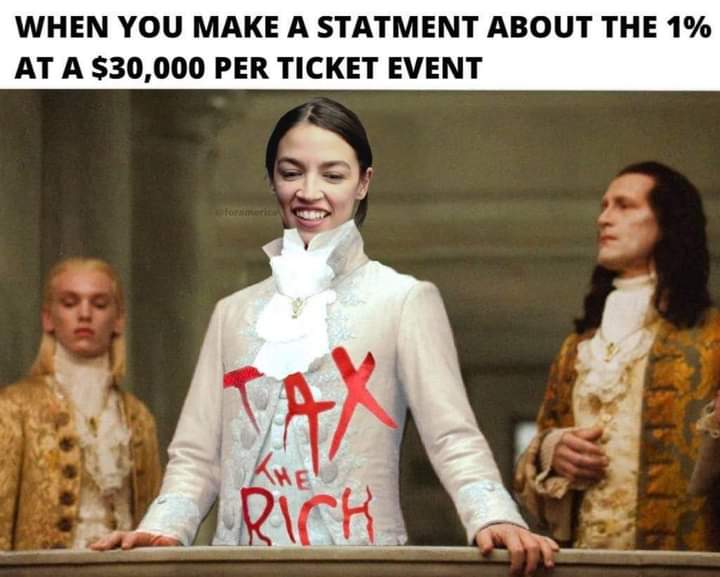 There are lots more 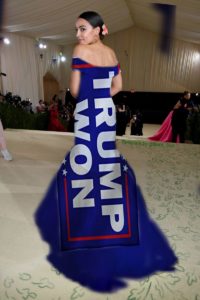 And perhaps my favorite 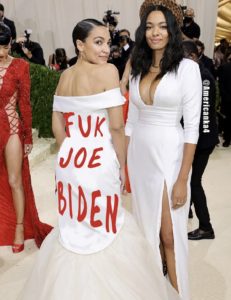 An ethics complaint has been filed against Cortez:

Ocasio-Cortez’s tweet didn’t definitively state whether she was given a free ticket to the event.

The AAF’s complaint, obtained by Fox News, asks the Office of Congressional Ethics to “immediately open an investigation” into Ocasio-Cortez and whether she accepted an “impermissible gift” to attend the gala or violated any campaign finance laws. “Without prompt investigation and enforcement of Congressional Rules, the American people are likely to lose faith in the ability of Congress to police its members,” the complaint says.

The complaint states that since Ocasio-Cortez described her attendance at the Met Gala as part of her official duties, the “receipt of the gift” must fall under either the widely attended event or charity event exemptions as defined by the House rules.  The AAF argues that the congresswoman’s invite fails on both exemptions, because the gala was not widely attended and because the invitations are overseen by Conde Nast, a for-profit company.

Ocasio-Cortez’s office did not respond to Fox News’ request for comment.

She “broke the fourth wall” — that again — and forced a bunch of Biden Democrat celebrities and other assorted cultural liberals in attendance to be deeply uncomfortable because she wore a designer gown calling on the the rich be taxed. She did it all for you.

She’s also proof of a gyno-centric American order in which competence and merit mean nothing.

She is an Instagram Karen, a that kind of thing sells to the other Karen’s hurtling towards the end of their lives, dying alone with four cats but no kids.

They lock you up, mask your children, and then party and laugh at you.pic.twitter.com/XvR5OPtu3f— The Columbia Bugle (@ColumbiaBugle) September 14, 2021

This has been expressed elsewhere but has anyone checked in on Abuela recently? Did they ever fix her roof? No money for roof repair for Abuela?

NEW YORK, NY—Beloved president and celebrity Donald Trump left Met Gala speechless this year when he showed up in a flowing white dress emblazoned with the phrase ‘Rigged Election!’
“It’s a beautiful, bold, brave statement,” said fashion writer Vandross Tixatron, who was wearing an $82,000 garbage bag plucked from a landfill in Zimbabwe. “It’s even braver when you consider the fact Trump wasn’t even invited and he’s being chased down by security now. What a statement!”
Other stunning attendees to the gala included:
Gavin Newsom in a dress made of discarded hobo tents
Bill Clinton, who wore a tux embroidered with the message “Believe All Women”
Buffalo Bill, a transgender hero in his latest skin-suit
Bill Cosby in a #MeToo dress
AOC, who wore a ‘Tax The Rich’ dress made by enslaved migrant children
Greta Thunberg, who wore a ‘Save The Planet’ dress made with clubbed baby seal skins
General Miley, who draped himself in the vibrant red flag of the Chinese Communist Party
In spite of the audacious and colorful characters at the Met Gala, Trump’s dress and attendance were deemed inappropriate and he was tackled by two dozen security guards and dragged outside.
Trump has announced he will be organizing his own, way cooler Met Gala for REAL Americans this winter.

all so True The Bee

Nothing says “I protect the little guy” like attending a $35,000 per ticket soiree wearing a mediocre drape costing tens of thousands of dollars. Democrats are the epitome of hypocrisy and corruption. How many of those poor homeless people the left pretends to care so much about the cost one of those dresses would support? Yet, these are the “rich” never targeted by Democrats. It’s why they oppose a flat tax income tax; their rich friends don’t get to dodge paying taxes.

Whatever you think of her, AOC certainly got her message of “Tax the Rich” out and into discussion throughout the country. Even sites like Flopping Aces continue to help her spread the message.

I might be missing something but that gown doesn’t look African to me. I have seen no mention of the value of the gown.

But, but, but……graffiti!
Graffiti is, at least, a partly black art form.
And AOC is only partly blacks, so, perfect.

In related news, the rich are certainly being taxed under Joe and his Dems.
In NY the top tax rate is now 59%.
In CA the top rate is now 62%.
In Cook Cty, Ill, depending on who you donate to, your property tax can skyrocket…..or not.
One Nursery business had a 2019 property tax of $25,000. This year it ballooned to $183,000.
Meanwhile his two Dem donating competitors in the plant business in Cook County saw only a minor rate hike for their businesses.
https://abc7chicago.com/cook-county-property-taxes-kinsch-florist-and-garden-center-assessor-fritz-kaegi/11019866/

And this vicious, ignorant, incoherent little b****h has been foisted upon our republic by 16,000 votes. That wretched, insignificant mess did not win her Congressional seat by 16,000 votes; she received 16,000 votes total. In all. Now in a nation of 300,000,000+ citizens, we’re forced to endure the idiocy, the arrogance, the horror of a bartender who can’t quite remember what that guy at the end of the far table just ordered. She stands right there with Pelosi and Clinton as the most despicable woman on this long-suffering planet. Might she crawl up her own suppurating a**.

That’s no way to talk about your mother.

Trump Discloses $40,000 in Gifts Received During Final Year
—
Former President Donald Trump accepted more than $40,000 in gifts in his last year in office, including freebies from executives of the Boeing Co., Apple Inc. and Ford Motor Co., according to his final financial disclosure report released Wednesday.

The most expensive: A $25,970 bronze statue depicting U.S. Marines raising the American flag on Iwo Jima during World War II, presented by the president of the Denver-based Greatest Generations Foundation.

Presidents and their families may accept gifts from U.S. citizens as long as they don’t violate conflict-of-interest or bribery laws. Trump’s disclosure, which listed 10 gifts, was the fourth of his presidency, but the previous ones listed no gifts.

Trump received two championship belts — one from the Ultimate Fighting Championship’s Colby Covington and another from wrestling fan Randy Jackson of North Carolina.

And Apple CEO Tim Cook gave him a $5,999 Mac Pro computer — the first built at an Apple factory in Austin, Texas.

South Dakota Governor Kristi Noem presented Trump with a $1,100 bronze sculpture of Mount Rushmore, where Trump once held a rally.

A spokeswoman for the former president did not immediately return a message seeking comment.
—
https://www.bloomberg.com/news/articles/2021-01-20/trump-discloses-40-000-in-gifts-received-during-final-year

Reminder,,,,,,”After leaving the White House, Hillary was forced to return an estimated $200,000 in White House china, furniture and artwork that she had stolen.”

One law for you peons and a completely different one for the rich elites.

“Right now, I have no idea which word I intended to pu...
No, The Ukraine War Has Not Stoked A Global Food Crisis.