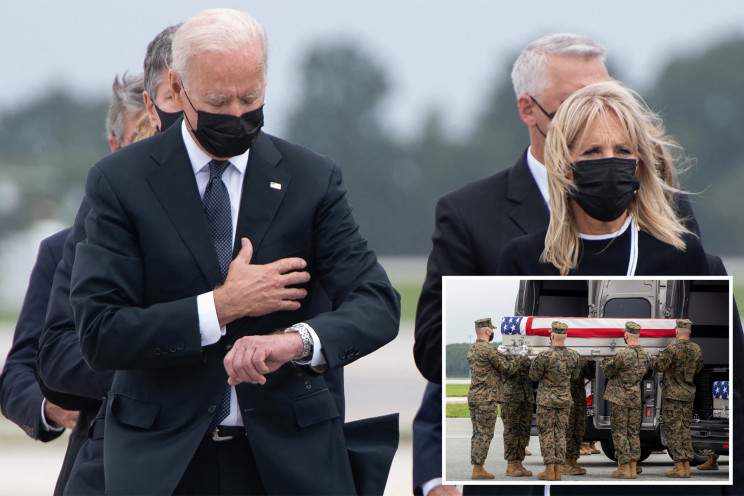 Thirteen brave U.S. service members were recently killed by an explosion outside of Afghanistan’s Kabul Airport. These magnificent men and women sacrificed their lives in a futile attempt to accomplish a mission contrived by a befuddled president and his crack gang of moronic, muddled, nincompoop advisers. Alfred Lord Tennyson, 167 years ago, accurately described the plight of our Marines as they observed the cluster f—k their “commander in chief” had conjured up.

“Forward the Light Brigade!”
Was there a man dismayed?
Not though the soldier knew
Someone had blundered.
Theirs not to make reply,
Theirs not to reason why,
Theirs but to do and die.
Into the valley of Death
Rode the six hundred

All 13 did their duty that day, honored their country, and followed orders. They were abruptly thrust into the valley of death appropriately called Afghanistan. They didn’t reason why or shirk their responsibility. Someone had definitely blundered and those brave men and women paid the ultimate price for defending our country. “Theirs but to do and die.” Their hearts would beat no longer.

President Biden flew to Dover Air Force Base in Delaware to receive the flag-draped remains of the 13 U.S. service members killed in the attack. One of the Marines mother, Kathy McCollum, was furious with Biden’s incompetent leadership and called his words “scripted, shallow and a total disregard for the loss of our Marine.” Kathy accurately described Biden’s entire presidency.

But Biden wasn’t done disrespecting the men and women who carried out his fateful mission. As each flag-draped coffin was removed from the plane, Biden, in a callous demonstration of his total lack of empathy, was observed checking his watch. Mark Schmitz told Sean Hannity that Biden checked his watch AT LEAST FIVE TIMES during the ceremony. I can only surmise that the intoxicating guilt of making such a horrible decision is wreaking havoc on Joe’s mental state of mind. Biden blundered and now 13 wonderful men and women will never see another sunrise or hold a loved one in their arms.

It is getting increasingly difficult to find anyone who voted for Biden. A recent Zogby poll found that only 20% of Biden voters now regret their decision. Really? Apparently, 80% of Biden voters still believe that electing Joe was a wise decision. President Obama once told a Democrat, “Don’t underestimate Joe’s ability to f—k things up.” Hello…ringing any bells? You were warned that Joe didn’t have the right stuff and you voted for him anyway. You hated Trump with a passion and his angry tweets drove you insane. Now good Americans are dying and this country is going to hell in a handbasket. Shame on you.