Michael Byrd is a coward 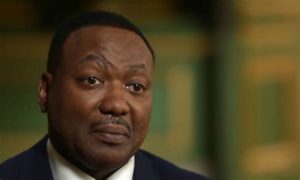 Michael Byrd is a coward.

Byrd, however, fancies himself a hero.

“Once we barricaded the doors, we were essentially trapped where we were,” Byrd said in an exclusive interview with NBC News’ Lester Holt, speaking publicly for the first time since the riot. “There was no way to retreat. No other way to get out.

“If they get through that door, they’re into the House chamber and upon the members of Congress,” added Byrd, who gave NBC News permission to use his name after authorities had declined to release it.

He claims he warned her

He said he yelled repeatedly for them to get back. But the mob kept pressing forward, and then a lone rioter tried to climb through one of the doors.

Roberts said he has interviewed several witnesses who were standing outside the Speaker’s Lobby with Babbitt, and that they’ll testify they did not hear the officer issue “any kind of warning.”

In fact, there were several officers and SWAT team members all around Babbitt, none of whom were especially bothered by those smashing the glass as none even attempted to stop them.

He also said video recordings his investigators have analyzed reveal that other police who were in the hallway with the officer did not react as expected before he fired. He said they seemed to be caught unaware as he opened fire. Roberts said he has lined up expert witnesses, including ex-cops and use-of-force experts, who will testify that the officers behind him in the Speaker’s Lobby would have taken cover or crouched and pulled their own weapons if they heard the lieutenant give repeated warnings he was going to shoot. Instead, Roberts said, they appeared to be casually standing or walking around in the lobby in the seconds leading up to the shooting.

Byrd said he saved Washington DC all on his own

“I know that day I saved countless lives,”

From what? An unarmed woman? A scary white unarmed 14 year Air Force veteran? What a f**king hero. He had no idea whether she was armed or not.

Byrd said he had no idea whether the person he shot was carrying a weapon. It was only later that night that he found out that the rioter was a woman who was unarmed.

Byrd was cleared- by the Keystone Kapitol Kops themelves

How convenient. Cleared by your own.

Jonathan Turley had a look at all this and raised some serious issues:

At the time, some of us familiar with the rules governing police use of force raised concerns over the shooting. Those concerns were heightened by the DOJ’s bizarre review and report, which stated the governing standards but then seemed to brush them aside to clear Byrd.

The DOJ report did not read like any post-shooting review I have read as a criminal defense attorney or law professor. The DOJ statement notably does not say that the shooting was clearly justified. Instead, it stressed that “prosecutors would have to prove not only that the officer used force that was constitutionally unreasonable, but that the officer did so ‘willfully.’” It seemed simply to shrug and say that the DOJ did not believe it could prove “a bad purpose to disregard the law” and that “evidence that an officer acted out of fear, mistake, panic, misperception, negligence, or even poor judgment cannot establish the high level of intent.”

Got that? Killing someone out of fear, panic or poor judgment is just fine.

While the Supreme Court, in cases such as Graham v. Connor, has said that courts must consider “the facts and circumstances of each particular case,” it has emphasized that lethal force must be used only against someone who is “an immediate threat to the safety of the officers or others, and … is actively resisting arrest or attempting to evade arrest by flight.” Particularly with armed assailants, the standard governing “imminent harm” recognizes that these decisions must often be made in the most chaotic and brief encounters.

Under these standards, police officers should not shoot unarmed suspects or rioters without a clear threat to themselves or fellow officers. That even applies to armed suspects who fail to obey orders. Indeed, Huntsville police officer William “Ben” Darby recently was convicted for killing a suicidal man holding a gun to his own head. Despite being cleared by a police review board, Darby was prosecuted, found guilty and sentenced to 25 years in prison, even though Darby said he feared for the safety of himself and fellow officers. Yet law professors and experts who have praised such prosecutions in the past have been conspicuously silent over the shooting of an unarmed woman who had officers in front of and behind her on Jan. 6.

Then Byrd destroys his own narrative:

Of all of the lines from Byrd, this one stands out: “I could not fully see her hands or what was in the backpack or what the intentions are.” So, Byrd admitted he did not see a weapon or an immediate threat from Babbitt beyond her trying to enter through the window. Nevertheless, Byrd boasted, “I know that day I saved countless lives.” He ignored that Babbitt was the one person killed during the riot. (Two protesters died of natural causes and a third from an amphetamine overdose; one police officer died the next day from natural causes, and four officers have committed suicide since then.) No other officers facing similar threats shot anyone in any other part of the Capitol, even those who were attacked by rioters armed with clubs or other objects.

There was only a single gun shot that day- Byrd murdering Babbitt. As a nation we should be demanding some answers not the least of which is why the cops who were standing behind Babbitt made no effort to stop her. Watch the video again

In the top right video there are numerous cops present as well as a guy in a suit who then speaks with some heavily armed cops on the stairs. The cops without the heavy gear then pull back and the suit talks to one of the heavy gear guys. No one attempts to stop Babbitt and Byrd blows her away.

She was unarmed. Byrd could have apprehended her.  Byrd could have presented himself brandishing a weapon in front of her and warned her such that she could hear him but it seems Byrd was bent on shooting someone. He was pictured rushing to the scene

Byrd already has a finger on the trigger. If you know anything about weapons this is a no no. The others have their fingers on the trigger guard. He’s ready to shoot someone and might have killed someone in that room inadvertently. Byrd has a history of mishandling weapons

According to Roberts, Byrd is a controversial figure with a record of mishandling firearms, including an incident where he left a loaded pistol in a Congressional Visitor Center bathroom.

As previously mentioned, Byrd was cleared by the USCP but there is more to know. The USCP is above the law. They can pretty kill you any time they want and will be protected. They are exempt from FOIA requests

Despite the public outcry for more transparency, none of the lawmakers who serve on committees whose jurisdiction includes the Capitol Police said the force charged with protecting and securing Congress should be subject to the 1966 Freedom of Information Act that requires federal agencies to disclose a large amount of government information to the public.

“They operate not only on the Capitol grounds but they have a cooperation agreement with the city that permits them to make arrests off the Capitol grounds,” Smith said. “For them to be an agency operating in the District without the same kind of transparency that the District government has is really not a good thing, and Congress should address it and fix it.”

Right now the Kapitol Kops are being expanded to Florida and San Francisco. You know, where Pelosi lives.

Babbitt’s death at the hands of the USCP is not the first.

Congress has shown scant interest in probing the death of Miriam Carey, the Connecticut dental hygienist involved in the fast and furious car chase that ended with 18 rounds of gunfire on and around the campus. Video of the Oct. 3, 2013, shooting of Carey has yet to be released by the Obama administration or Capitol Police, which responded along with the Secret Service when Carey allegedly drove into a well-marked White House security checkpoint without authorization, then fled. The unarmed mother, driving erratically with her 14-month-old daughter in the backseat of the car, sustained five gunshot wounds to the neck and torso area, according to an autopsy.

In July 2014, the Justice Department announced no criminal civil rights or local charges would be filed against the officers involved. But the agency has not complied with requests to make the final report and findings of that investigation — involving interviews with more than 60 witnesses, crime scene evidence, ballistics reports, videos and photos — public.

We all saw the clown show that featured four USCP testifying to their abuse on January 6 but none of what they allege has been supported by any evidence and there will be none forthcoming:

The U.S. Capitol Police force is attempting to shut down a watchdog lawsuit that attempted to gain public access to materials pertaining to the Jan. 6 Capitol breach by arguing such content is “not public records.”

As I said, they are above the law and accountable to almost no one. So to whom are they accountable? Not Pelosi, says USA Today.

Pelosi was not a chair or administrator of any committee supervising the Capitol Police at the time of the insurrection. She’s not listed on any of those committees’ websites today, either.

But over at Politifact it says

Byrd is no hero. He is a coward. When he does finally appear on The View you’ll know for a fact it’s true.

I am not one to wish demise on anyone but I truly hope that every night when he closes his eyes he sees Ashli Babbitt’s face, stunned and lying in a red pool while bleeding out knowing he murdered an unarmed woman and that it haunts him forever.