The One Simple Trick Every Parent with Kids in College Must Do! 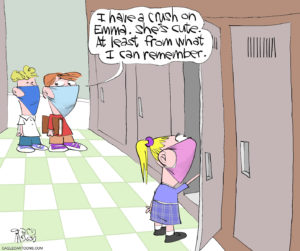 It’s easy to believe that your student will be shielded by their good upbringing, and you’ve been as good at communicating with them as any parent and teenager could hope to be. But don’t forget what it’s like to be that age – young men and women are impressionable, and can easily be taken in by someone who argues with enough conviction. Or they’re just looking to rebel & upset the order as every generation before them has done, but today this can be a far darker path. Luckily there is one simple trick, and while it does not guarantee success, it gives your family a fighting chance.

Earlier this summer, Virginia State Delegate Nick Freitas spoke at an event I was attending, and I asked him a question at the end regarding fighting back. The Q&A themselves aren’t as important as the tangent he went on toward the end of his answer. He mentioned that when your kids come home from college giving you and earful of Leftism, instead of challenging them or chiding them for spouting the joys of Communism or the latest Climastrology theology, try this instead – engage them. Ask probing questions as to what they believe? Decrying Capitalism? Ask what their definition is and be ready to pull it apart. Preaching Climastrology? There are many angles to hit, so choose carefully – where is the plan for how many solar panels & wind farms will go & how much will they cost? What is the carbon footprint of all of these Climate Conferences? Granted, as we all know from engagng our Lefty pals that you can’t reason someone out of a position thay haven’t reasoned themselves into. But at least with the parental relationship there is a greater bond that can hopefully keep the rot from taking hold.

I loved Nick’s advice, and I’d also suggest taking it one step further. You know which classes your son or daughter is taking, so you should also know who their professors are. Why not do your homework on the profs? If they’re not published, they probably at least have social media feeds. Do your homework on them, and learn what they’ll be preaching to their masses. For that matter, you can do similar homework on any campus leaders who may also be crossing your family’s path. The better you understand what your kids are hearing, the better you’ll be prepared for what’s going to get repeated back home.

Yes, I know, reading articles and social media feeds of Radical Leftist educators is nobody’s idea of a good time. But the days where we can can assume that our kids’ education and entertainment that they ingest aren’t teaching them to follow some hateful ideology that will make them despise thier family, culture, history, and country are long gone. To whatever degree appropriate, we have to find ways to keep looking over our kids’ shoulders. On a personal level, your family depends on it, and when you think about it, on a larger scale America is depending on it.