About that “newer, softer Taliban” 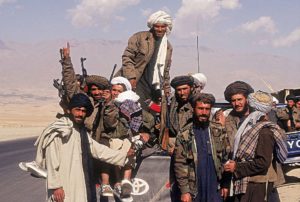 It didn’t take long for the eunuchs at PBS to embrace the Taliban propaganda. Fresh off kicking Joe Biden’s ass, the Taliban used the left wing press as its muse to spread a message of hope.

Now Taliban representatives are being welcomed from Beijing to Moscow, where Russian Foreign Minister Sergei Lavrov last month called them “reasonable people.” The group has a social-media presence and responsive media team that is saying all the right things: It wants an inclusive government, it won’t take revenge on political opponents, diplomats are safe and investors won’t have trouble: “No one should worry about their life,” it said in a statement over the weekend.

Why, they even offered amnesty to their foes. Such sweet guys.

On the same day the Taliban promised to honor women’s rights, they killed a woman for not wearing a burqa. Women would be allowed to participate in government “if they adhere to Islamic law.”

Strict Islamic Law. You know, the law that allows the Taliban to kill women for looking at them the wrong way.

The Taliban are forbidding women from going out of their homes.

A female Afghan journalist denounced Thursday that, despite assurances to the international community that they would allow women to work, Taliban jihadists are banning women from leaving their homes in Kabul and personally banned her from doing her job.

Radio Television Afghanistan (RTA) anchor Shabnam Khan Dawran denounced the jihadist regime, in power since its takeover of Kabul on Sunday, for denying her access to the RTA headquarters on the grounds that she is a woman.

They tortured and massacred a minority ethnic group

Witnesses have given harrowing accounts of the killings, which took place in early July in Ghazni province.

Since taking over the Afghan capital Kabul on Sunday, the Taliban have tried to portray a more restrained image.

But Amnesty said the incident was a “horrifying indicator” of Taliban rule.

They executed an Afghan police chief.

The Taliban have begun conducting door-to-door searches for people they believe worked for US-led forces and the previous Afghan administration — despite their “no-revenge” promise, according to a Norwegian intelligence group.

A report by the nonprofit RHIPTO Norwegian Center for Global Analyses, seen by Reuters, said the insurgents were hunting for people linked to the previous administration, which fell Sunday when the Islamist militant movement took Kabul.

“Taliban are intensifying the hunt-down of all individuals and collaborators with the former regime, and if unsuccessful, target and arrest the families and punish them according to their own interpretation of Sharia law,” the report said, according to the news service.

“Particularly at risk are individuals in central positions in military, police and investigative units,” it added.

The Taliban is blocking roads to the airport.

The situation is reportedly getting worse

A source tells me, “Situation [in Afghanistan] is rapidly deteriorating… We’ve had Americans get beaten throughout the night.” One of them, an American woman, was beaten “twice” even though she was carrying a U.S. passport.

Yet their message continues

The Taliban have sought to project moderation and have pledged to restore security and forgive those who fought them in the 20 years since a U.S.-led invasion. Ahead of Friday prayers, leaders urged to imams to use sermons to appeal for unity, urge people not to flee the country, and to counter “negative propaganda” about them.

Meet the new Taliban. Same as the old Taliban. One cannot imagine anyone stupid enough to buy into the Taliban propaganda.

Other than the incompetent fools of the Biden regime, that is.

we will never know the number of people butchered, sold into slavery or ransomed as hostage’s. another tehran is coming to America. Wow! recall that the idiot joe was in the senate when carter was pres. and the hostages were held for 444 days with a botched rescue mission.

Much like idiot Biden’s promise of “unity”. They’ll unify by putting dissidents in jail without charges, bail or representation. No wonder the Democrats don’t have a real problem with the Taliban; oppression, lies, strict adherence to ideology and destroying monuments are all things they have in common.

This cowardly regime, after they totally screwed up the withdrawal, are too worried about the negative perceptions if we put more troops in and go forth to rescue our citizens and allies, so they just hunker down at the airport. He needs to choose; does he want to see soldiers hurt or, God forbid, killed or does he want to see the stranded US citizens taken hostage and our allies butchered? Someone will have to decide; we don’t have time to “focus group” it.