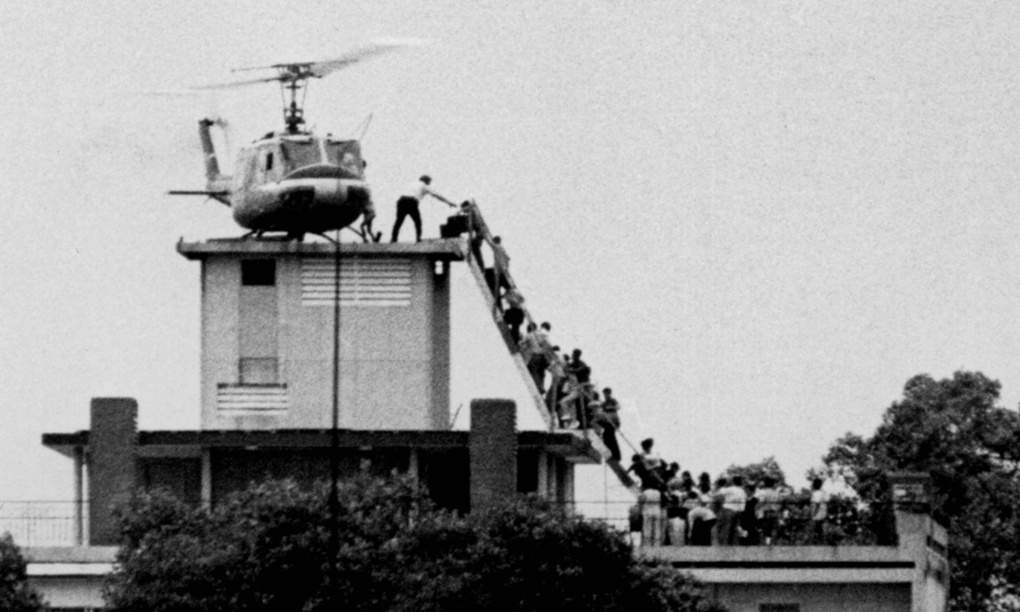 A father sent out a tweet today sharing a question his son asked:

My son suffered massive injuries including a lost limb from a blast in Afghanistan and he called me the other night and asked, “Dad what did I fight and suffer for?” Sad

About 2500 members of the military lost their lives in Afghanistan. Many more were injured.

Last month Biden promised America that Afghanistan would not fall to the Taliban.

36 days ago, President Biden told the American people that the Taliban would not take over #Afghanistan after he ordered the removal of U.S. troops. pic.twitter.com/FiG5pWsyey

The Biden regime blew into Washington like a hurricane bent of reversing everything Trump had done and made a glorious spectacle of it, overflowing with hubris and arrogance. They terminated Trump’s border policies that had a lid on illegal immigration and they created a disaster.

Now they’ve created a disaster in Afghanistan. It turns out that arrogance and hubris are poor substitutes for intelligence.

Look at how appalling embarrassingly wrong Secretary of State Blinken was about the state of play in Afghanistan during his House testimony back in June. Either our leaders are bullshitting or our intel about the facts on the ground is a joke (or both!).https://t.co/tz8vCWcBPE pic.twitter.com/SvrtGqK3nP 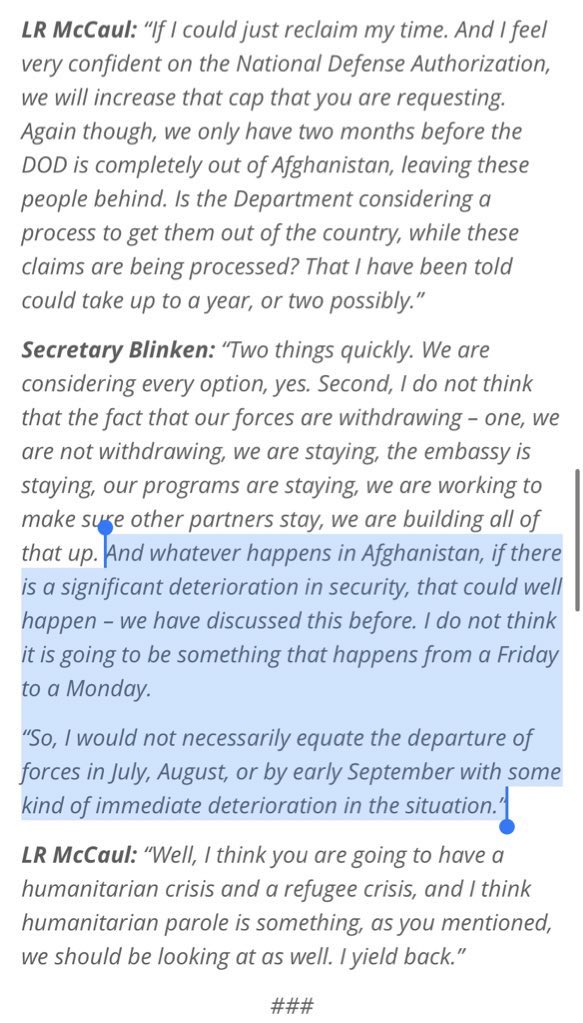 It’s not getting any better

US intelligence agencies who said just 4 days ago that Kabul could fall in 90 days have revised the figure to 72 hours
https://t.co/v2XUuPVcKX

Trump had an agreement with the Taliban

The February 2020 agreement called for the withdrawal of U.S.-led troops by May 2021 in return for the Taliban breaking with terrorist groups, sharply reducing violence and entering into peace negotiations with the Afghan government.

Trump’s negotiating style was far different from the Biden boobs.

“We’re going to come back and hit you harder than any country has ever been hit,” Trump said he told Akhundzada, recounting the threatened consequences if the Taliban failed to make peace. “And your village, where I know you are and where you have everybody, that’s going to be the point at which the first bomb is dropped.”

A few hours after that March 2020 call, Trump put an insurance payment down on the threat. When the Taliban attacked an Afghan checkpoint shortly after Trump hung up, U.S. fighter jets rained down fury on the attackers. A stung Taliban immediately called for de-escalation, saying it was committed to the “plans to implement all parts of the agreement one after another to prevent conflict escalation.”

Trump meant what he said.

Trump and his advisers relentlessly used air power to keep the Taliban in check, making the appearance of a deadly Predator drone or warplane a constant threat. In 2019, the year before the Taliban agreed to peace talks, U.S. aircraft flew 2,434 strike sorties, releasing 7,423 weapons, the highest total ever recorded by the Air Force’s Central Command.

When Biden was elected, Taliban leaders knew they had a sucker on a hook and they ignored the agreement.

Pentagon Press Secretary John Kirby said on Thursday the Taliban were failing to abide by their pledges under the deal, which was supposed to open the door to a peace settlement between the insurgents and the U.S.-backed Kabul government.

And why not? Biden is barely coherent and his staff is incompetent. He abandoned Trump’s plan.

Instead, Biden chose to put his tail between his legs and run. He signaled the Taliban that he would do nothing and would abandon Afghanistan. As US forces hastily withdrew, the Taliban has taken one city after another. That haste has been costly. Biden has actually armed the Taliban.

The #Taliban not only seized appr. a hundred US humvees and (MaxxPro) MRAPs at Kunduz airport, but also several US ScanEagle drones.
Billions of US tax payer $ going to Islamist extremists, thanks to the administration’s hasty withdrawal without a peace deal or follow up mission. pic.twitter.com/Fb5MTpdLKK

The Taliban will likely sell the drones to China or Russia since Biden chose to leave them. Biden will have given away more of our technology, just as obama did before him. This is simply astonishing.

The Taliban are now in possession of more Blackhawk helicopters than 166 other nations around the globe. pic.twitter.com/2q9CyXcBNy

Right now the Taliban is preparing an assault on Kabul and the Biden regime is literally begging the Taliban not damage the US Embassy or harm Americans. Not surprisingly, Biden is blaming Trump for his failures.

This has been as abysmal intelligence failure and it’s not hard to understand why.

Mark Milley is furiously paging through his dog-eared copy of Robin DiAngelo’s White Fragility looking for a solution to Afghanistan.

While Milley was focusing on white rage the Taliban were laughing their asses off.

And Biden? Well, while Afghanistan falls and the crisis at the Southern border rages on, he’s off on a two week vacation 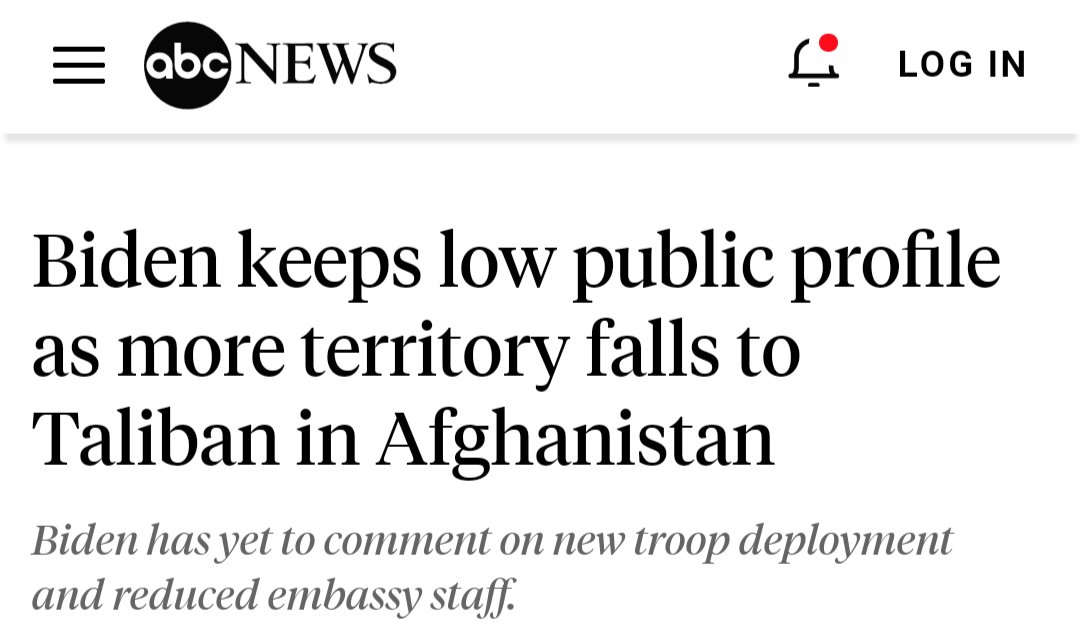 Right. Because that’s what the leader of the free world does when multiple crises swirl. He hides.

This would be a great time for China to take Taiwan, Russia to invade Ukraine and for Russia and China to attack US interests. Biden is a one man clusterf**k.