Arguing with Leftists is an Exercise in Futility… 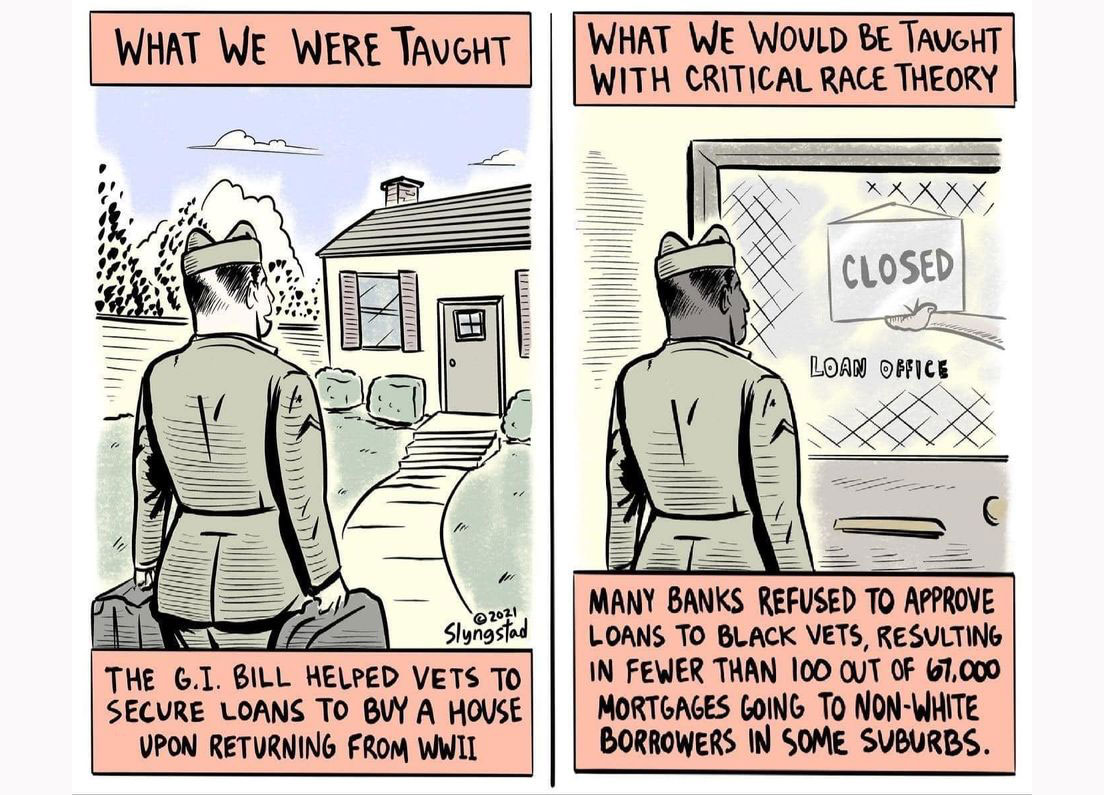 Last week Dan Bongino talked about the pointlessness of arguing with the left. He said something like “We think the left are simply people with bad ideas while the left thinks we are simply bad people…” He went on to say that while pointless in terms of trying to convince the person with whom you’re “arguing”, it’s worthwhile because others, who may be open minded and paying attention, might be persuaded.

This was driven home to me via a Facebook discussion that started out with a friend’s cartoon suggesting CRT is an innocuous addition to the teaching of American history that shows some of the darker chapters.

My response was: “No one opposes teaching history, warts and all. I studied slavery, Jim Crow, the Trail of Tears, Chinese workers basically in servitude to build the RR and more. You keep mischaracterizing CRT as just teaching the negative side of American history. It’s not. The heart of CRT is that the US is systematically racist and minorities can’t succeed. That’s fiction and you know it.”

Which started a firestorm from a friend of my friend, from which I’ve excerpted:

It’s apparent that you gained little insight from your studies. If they didn’t touch on the racist systems that led to those events occurring, you obviously got the sanitized, white washed version where the savagery and downright inhumanity to any non-white man BY white men was totally excluded. Just like your fellow GOP white Supremacists, there is NO reality that y’all can’t bend to save your false sense of identity that you’re superior to all non- whites and European genius and goodness is the only reality there is.

American Slavery was different and worse than any other slavery in the History of the World. It’s the only slavery where the slaves were dehumanized. No other slavery treated the slaves like a horse or a chicken.

To which I responded:

It’s true slaves were treated as property, but in fact, slaves in the American south were largely treated better than slaves in South America and the. One major reason for that was the Constitution’s ban on the importation of slaves after 1808. Slaves therefore became far more valuable than they were in the rest of the Americas and it was to nobody’s benefit to work them to death. That is, very unlike Brazil, the Caribbean and elsewhere where slaves were cheaply imported and therefore expendable. The truth of this can be seen in the fact that 94% of the slaves brought to the New World went somewhere other than the United States, but by 1860 2/3 of the slaves in the New World were in the American south.

He continued: The effects are still being felt today when George Floyd’s murderer gets 22.5 years for killing a black human being but a black man killing a Police DOG recently was sentenced to 45 years. That just shows that the dehumanization of black folks specifically males is baked in to American society. The ONLY ones who are treated like human beings are the exceptional negroes who make it through systemic racism baked into every institution in America or those who entertain white folks in music, TV or sports. And even they can’t say anything bad about America or their lives could get turned upside down.

Wouldn’t it be nice if American Europeans tried to dismantle this system and rectify the damage? The boost to our economy through reparations alone and the good will gained worldwide as America denounces its past and pledges to make amends would truly place this nation at the top as it stones for its sins. But, white America collectively isn’t interested in any of that. It’s only interested in the maintenance of white supremacy for various reasons, not the least of which is white genetic survival, power and greed.

After more futile back and forth, I decided to take a different tact:

Let’s try a thought experiment… Imagine everything you said is true about programs being stacked against minorities. What do you do to fix them? Reverse discrimination? How about reparations? Who pays? Who gets what? Who decides? Does Obama pay or does he get money? Do recent African or Caribbean immigrants get money too or only people who can trace their lineage back to slavery or even Jim Crow? What about black families who owned slaves? Do the million or so black millionaires get money too? When are things as they should be? What’s the measure? Will every company or classroom or board have to reflect the pigment hue of the country as a whole? Will it apply to everything from police to janitors to ditch diggers to the NBA and the NFL? Will all of this change the unwed birth rate in black America? Is murder still to be considered a crime as half of the offenders in the US are black males despite the fact that they make up only 6% of the population? Since reparations will make everything even do we do away with welfare programs that disproportionately benefit minorities?

Or, maybe all of us could be grateful for the fact that today virtually every one of us is extraordinarily lucky to live in a country that allows so much freedom and opportunity that millions of people literally risk their lives to come here every year and probably half or more of the rest of the world would happily change places with almost any American.

He responded: In other words, you’re just another psychotic white Supremacist and it makes NO sense trying to REASON with a psychotic.

To seek to evade all responsibility or accountability for the greatest crimes against Black humanity in history is the mindset of a Savage…PRETENDING to be civilized. Someone who cares nothing about Honor, truth, civility, fair-play OR in obeying their OWN laws, let alone those of God.

White Supremacy has made most white folks, LIKE YOU, spiritual MONSTERS to be able to say stuff like that with a straight face and sleep like a baby at night. There lies the entire problem of Racism in America which is a power dynamic that only WHITE AMERICANS have. Blacks can’t be racist towards you because we haven’t set up systems of power that can destroy the lives of you or your family. White folks do that to blacks ALL the time.

It was clear he was not really interested in ideas focused on making life better for black Americans,  but rather extracting revenge in the form of reparations from the whites who by definition are racists and guilty.

This is why Biden is in the White House, other than the fraud, obviously. Democrats have become the party of grievance, the party of victimization. If they can convince a group they’re victims, they never have to actually accomplish anything. The focus is always on past failures or some other strawman that rational policies simply cannot be allowed to address. It’s the ultimate in maintaining a grip on power. Why ever address policy failures or “unintended” consequences, when it’s so much easier to simply craft a grievance that can simply never be addressed. For Democrats that’s a recipe for success. For America it’s a recipe for disaster.