The idiot killing the economy 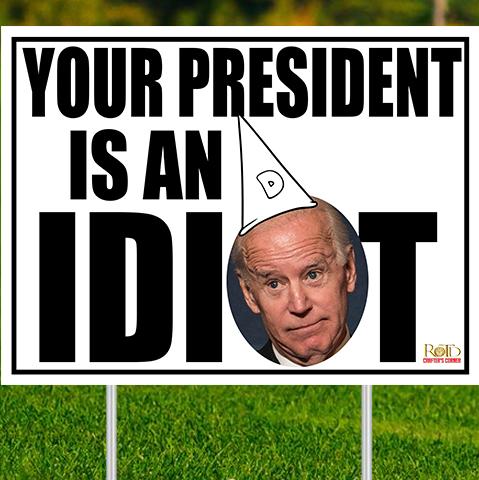 Without a doubt there are moments when Joe Biden doesn’t know where his feet are. He frequently loses his mask and he often is confused but do not discount his mendacity for one second when he is lucid. He is and always has been a liar of epic proportions. Even more of his deceit can be seen here. He is not a nice man. He is not a good man. The smartest man he knows holds the Guinness World Record for smoking parmesan cheese.

It was widely predicted that the economy would add close to a million jobs last month but only 266,000 jobs were added. It was regarded as the biggest prediction fail since 1998 and one CNBC host thought it was a typo. Biden went out and blamed Donald Trump for the bad numbers while out of the other side of his mouth claimed that America was moving in the right direction.

Why is the employment report so dismal? Because Biden is providing a financial incentive to not work. Not working pays far better than working.

Under President Biden’s recently enacted $1.9 trillion American Rescue Plan, workers who lost their jobs to the pandemic shutdowns and scale-backs are now earning more in unemployment benefits than they did in wages. And that is stopping people from returning to work — just when employers are trying to reopen across the nation.

The unemployed are getting an extra $300 a week in federal benefits through Labor Day. That’s on top of state unemployment benefits averaging about $320 per week.

It all adds up to an average of $638 per week in combined federal and state unemployment payments. In 2019, that combined amount averaged out to $348 per week.

According to economists at Bank of America, the combined unemployment benefits mean that anyone earning less than $32,000 a year can potentially receive more income from unemployment aid than from their previous jobs.

Restaurants and small businesses are desperate to hire as the economy gains momentum but Biden is determined to smother them:

Owners and managers from New York, California, Washington, and Chicago told The Epoch Times hiring woes have become a nightmare amid a litany of other challenges like indoor occupancy rules. They say the federal unemployment bonuses handed out during the CCP (Chinese Communist Party) virus pandemic incentivized people to stay home instead of working.

Mark Fox, a Dublin native who lives in New York City, owns four restaurants in the Big Apple. While business is now finally starting to pick up, hiring troubles have slowed down the momentum.

“We are probably 60 employees short,” he said. “I have one restaurant in Greenwich Village that I haven’t reopened yet because they don’t have the manpower.”

I have a long time friend who quit a job as chef because he could not find any help.

So what does the Liar in Chief say?

“Mr. President, do you believe enhanced unemployment benefits had any effect on diminishing a return to work in some categories?” a reporter asked Biden.

“No, nothing measurable,” Biden answered.

Talk about detached from reality. We cannot sustain as a nation by printing money and incentivizing people not to work. What’s wrong with him?

Or maybe it’s because he’s a f**king idiot.