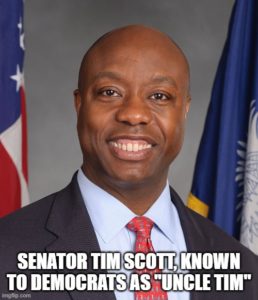 About a week or so ago  Kamala Harris said “America has a long history of systemic racism.” Joe Biden added that “systemic racism” is a “stain on the nation’s soul.”

Truth is, America is a racist nation and there is no worse racism than liberal progressive democrat racism. We can begin with the current occupant of the Oval Office. Biden once observed that Barack Obama was “clean.” Biden didn’t want his kids growing up in a “racial jungle.” One of Biden’s mentors was an Exalted Cyclops in the Ku Klux Klan.

More of Biden’s racist history can be seen here.

We’re supposed to forget and forgive Biden because his offenses were in the past but we’re not to forgive Thomas Jefferson whose words were the catalyst for racial equality.

The Ku Klux Klan was founded by Southern democrats.

Clarence Thomas was excoriated for marrying a white woman.

The tradition continues today. Any black person who dares think differently from the plantation owners is to be insulted, assailed and canceled. Last night’s plantation escapee was Sen. Tim Scott (R-SC). Scott had the audacity to assert that America was not a racist nation.

“You know this stuff is wrong. Hear me clearly: America is not a racist country,” Scott declared. “It’s backwards to fight discrimination with different types of discrimination, and it’s wrong to try to use our painful past to dishonestly shut down debates in the present.”

Then the left jumped up, snapped on their hoods and proved him wrong.

Joy Reid, one of MSNBC’s resident race mongers and racial hate promoter said that she’s “embarrassed” for Scott, that Scott threw whites a “lifeline”, suggested Scott was Trump’s puppet and called him a liar.

And he came out and lied about the Georgia bill saying it’s easier to vote in Georgia than in New York.”

Reid added, “I am shocked and a bit embarrassed for him. This was a lost opportunity. Tim Scott has an opportunity to make his mark on criminal justice reform, and this ain’t going to do it. This wasn’t it.”

In other words, the slave left the plantation and refused to return.

“This is a speech delivered from a planet where facts don’t matter, which is where the current Republican Party resides. So it’s not really his fault. But it is his responsibility to get his facts straight.”

It’s not called PMSNBC for nothing.

Over at CNN Scott was called a liar and more

As Bash was getting into her reaction to Scott’s rebuttal, she started to give a wink and nudge to Scott’s supposed status as a token black by noting his “brand” and “unique voice in the Republican Party.”

She went on to essentially suggest Scott was being an Uncle Tom for defending something that was allegedly “worse than Jim Crow”:

He’s the only black Republican in the United States Senate and talking about the Democrats attacking these voting restrictions that are being passed across the country and these states as Jim Crow – worse than Jim Crow and fighting back against that kind of rhetoric; was interesting but it’s actually – it’s not necessarily true.

Bash and Phillip cackled in unison while declaring: “It’s not true.”

It got worse. Quite a lot worse. The racism was pouring out of Twitter

Twitter is choosing to trend a racist attack from the left on Sen. Tim Scott, the black Republican senator from South Carolina. pic.twitter.com/kpyPOHnuXJ

This from Amy Siskind

Tim Scott says “America is not a racist country.” Not sure how this man lives with himself.

(Siskind is a wealthy former Wall St. trader and Morgan Stanley alumna. Tucker Carlson has called her a “moron.” He’s right. See why at the link)

Scott himself laid waste to progressives

In response to President Biden’s address to Congress, Sen. Tim Scott calls out “progressives” who call him “Uncle Tom” and “N-Word.” He also called out The Washington Post “fact-checker” Glenn Kessler who targeted his family history. pic.twitter.com/7k7I7qwUOM

democrat progressives have been whipping the racism horse endlessly. The truth is that any time a black person dares contradict their narrative democrat progressives (for the most part lily white hypocritical dilettantes and race mongers from Ivy League schools) do not hesitate to put on their Klan hoods and lynch the plantation escapees like Tim Scott, Clarence Thomas and Candace Owens. This is real racism. There is no racism like liberal progressive racism pretending to be otherwise.

It is shameful. As the patriarch of a multi-racial family, I find these words and these democrat liberal progressives despicable.