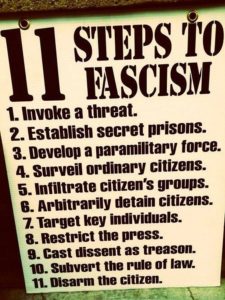 It is no stretch of the imagination to assert that we are on the brink of true fascism. democrats control all of the government and intend to make it real.

We start with No. 1. Invoke a threat.

He didn’t. It was never proved because dems decided evidence wasn’t necessary. Trump was acquitted.

The was but one shot fired, and it was from the gun of a Capitol policeman who killed an unarmed woman. No other weapons were used for anything.

In an article published by the Daily Beast, Jeff Stein argues that existing federal agencies like the FBI are ill-equipped to stop “white terror” because they missed signs of the the pre-planning of the Capitol building siege.

The solution is to create a new “secret police” (yes, he literally uses those words) in order to “infiltrate and neutralize armed domestic extremists,” which according to the media’s latest narrative potentially includes 70 million Trump voters.

Stein even compares the Capitol breach to 9/11, an attack that killed nearly 3,000 people, and argues that a similar response to that should be directly inwardly against American citizens directed by a new “domestic spy agency.”

“One response to the 9/11 tragedy may well get renewed attention after the Capitol assault—especially if armed white nationalists are successful in carrying out more attacks in the coming days and weeks: The call for a secret police,” he writes.

“I think we need to confront his criminality, his corruption, and his dangerousness every single day. As long as he’s still out there, he remains a clear and present danger to the American people. He spent four years in office cozying up to every dictator and despot on earth, from Putin in Russia to Orbán in Hungary to Duterte in the Philippines, el-Sisi Egypt. You find a criminal in public office that was Donald Trump’s guy. They’re going to be, you know, sending Jared Kushner out there on a globetrotting tour of every kleptocracy and autocracy on earth in order to collect the money they feel they deserve from having worked with all of these regimes.”

None of that is true.

The clear and present danger test features two independent conditions: first, the speech must impose a threat that a substantive evil might follow, and second, the threat is a real, imminent threat. The court had to identify and quantify both the nature of the threatened evil and the imminence of the perceived danger.

It obviously doesn’t fit, but law means little to democrats. Then again, in Tom Clancy’s book, “Clear and Present Danger” was used as the pretense to eliminate the alleged theat.

“SCOOP: Congressional Dems sent a letter to Comcast, Amazon, Google, ATT & others, demanding to know what they plan to do about the ‘the spread of dangerous misinformation’ from Fox News, OAN and Newsmax – including whether they will continue to carry them,” the Times’ Rachel Abrams reported.

“Are you planning to continue carrying Fox News, OANN and Newsmax on your platform both now and beyond the renewal date?” the letter asks. “If so, why?”

This is egregious that the FCC Commissioner issued a response:

FCC Commissioner Brendan Carr issued a stern denouncement of the letter, calling it “a chilling transgression of the free speech rights that every media outlet in this country enjoys.”

Never mind the four plus years democrats cried “Russian collusion” and worse. Remember how Republicans sought to shut down left leaning outlets for those lies?

democrats also have plans for us

Former Marine Corps Infantry officer Kyle Bibby, the national campaign manager at Common Defense, told The Root that if those who took part in the early January riot at Capitol Hill “were in Afghanistan” they would have been hit.

.@PamKeithFL told me that Democrats need to give up bipartisanship and that we need to treat the Republican Party as enemy combatants because they have embraced white supremacy over equality. https://t.co/d7dBvfxcVD

He went on to point to legislation from Rep. Stephanie Murphy, D-Fla., noting that the Orlando lawmaker is proposing a bill that would, in the host’s words, “ban anyone with the wrong opinions from having a significant job in the federal government.”

“Believe forbidden things and you don’t get a security clearance. You can’t work here,” he said. “Murphy’s bill would require federal investigators to ask all applicants whether they had ‘associated with or knowingly engaged in activities conducted by an organization or movement that spreads conspiracy theories and false information about the United States government.’.”

Notice how lockdown of the country appears as though it will never end? Notice how illegals have free entry and free roaming about the country but citizens are clamped down upon? Notice how “emergency powers” seem to grow every day but aren’t to be found anywhere within the Constitution?

The bill would require gun owners to pay $800 per year for firearms insurance and ban ammunition that is .50 caliber or greater.

It also establishes a minimum gun ownership age of 21 and requires a psychological evaluation and completion of a government training course before the purchase of a firearm. Even antique firearms displayed in a home would have to be registered.

Tonight on Tucker Carlson, Naomi Wolf (!) lamented that she felt we were now in a police state.

We are very close to a fascist state. The signs are all there.