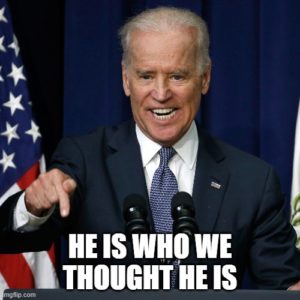 I am old enough to have witnessed pretty much the entire 47 year Joe Biden experience and it’s not pretty. He’s not the kindly old grandfatherly nice guy the puppeteers want you to believe.

He’s a prick and has always been a prick.  He is a liar and a plagiarist.

During his campaign he flashed the anger on occasions.

This is the smartest man Biden knows

This is Biden with one of his mentors

Joe Biden’s plans are everything we feared. He is no moderate. He is Obama III and worse. He learned nothing from Trump, who made life better for Americans. He will make life better for China, Iran and India at our cost.

Biden plans to reward 11 million illegals with citizenship. I’ll take “How do you get another 11 million illegals” for a thousand dollars, Alex. Flooding the country with more illegals is great for large corporations who want cheap labor but it does suppress wages for Americans.

That last one is disgusting.

On his first day in office, Biden will reinstate the Obama-Biden guidance revoked by the Trump-Pence Administration, which will restore transgender students’ access to sports, bathrooms, and locker rooms in accordance with their gender identity. He will direct his Department of Education to vigorously enforce and investigate violations of transgender students’ civil rights.

This mean putting men back into rest rooms with little girls.

It also will destroy women’s sports. Colleges will be seeking all transgender women for sports teams. Transgender “women” maintain a strength advantage for at least a year following transition- and that’s assuming they have actually undergone the surgery. No word on whether one has to actually have undergone transition surgery or simply perceive one’s self as some thing other than one’s actual genetic make-up.

Biden also plans a huge tax break for the wealthy in doing away with Trump’s limit on SALT deductions (state and local taxes). From the Brookings Institute

Before the 2017 Tax Cuts and Jobs Act (TCJA), taxes paid to state and local governments could be deducted against Federal income taxes. But the TCJA capped this benefit at $10,000 a year, hitting the wallets of high earners living in high-tax cities and states.

Senate Minority leader Chuck Schumer of New York said of the cap: “I want to tell you this: If I become majority leader, one of the first things I will do is we will eliminate it forever….It will be dead, gone and buried. ”House Majority leader Nancy Pelosi of San Francisco has attempted to remove the cap as part of the Congressional packages to blunt the impact of the pandemic. Presidential hopeful Joe Biden is also in favor.

Schumer and others argue that lifting the cap will help cushion the impact of the pandemic. As he stated: “The SALT cap hurts people affected by the virus.”But this is unlikely, since it is the most affluent who are hit by the cap—and they are not, in general, in the front lines when it comes to COVID-19. In fact, the richest neighborhoods of New York emptied out as the pandemic hit. In the Upper East Side, the West Village, SoHo, and Brooklyn Heights, for example, the residential population decreased by 40 percent or more by May 1. This is a tax cut for people with secure jobs and excellent health insurance, working from expensive homes. Rather than reversing the cap, there is a strong case for building on the progress made in the TCJA and eliminating the deduction altogether.

Biden will sign an EO putting the US back into the Paris Accord, which put all kinds of burdens on the US and lets China and India totally off the hook.

Biden will bow to Iran and beg to be allowed back into the JCPOA. It was a bad deal which Iran it violated from day one. Oh, and don’t publish any “unnecessary” details about what we’re doing, says Iran.

Biden demurs as Big Tech censors conservatives to the point that the world is outraged by it. Well, Xi and Putin are not bothered.

The Biden family is thick with China and Biden himself has shown a great fondness for the Communist State that has brought the us to its knees.

Nothing Biden plans is for the betterment of America.

Communist China’s stated goal is to diminish the US and supersede it as the world’s Number One Superpower. Led by Joe Biden and the democrats mean to make that goal succeed.