The Presidential election was absolutely rigged and the Georgia election is also rigged. 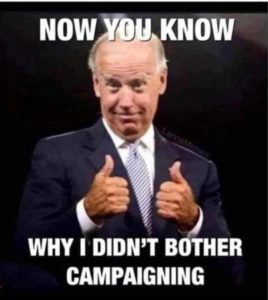 Yes Virginia, the Presidential election was rigged and the election in Georgia is being rigged as we sit here.

Oh I know. There’s “no evidence.” More correctly, the evidence is being suppressed, but that’s not why I write this. There was no enthusiasm for Biden. There were no crowds.

But never mind that for now.

The election was rigged- by the MFM.

Not only is the MFM abdicating its job, it’s protecting Biden.

What happened to Tara Reade? She had more evidence of being assaulted by Biden than any of Kavanaugh’s accusers. She was buried by the MFM. She was only one of many accusers. They were all buried.

We documented Biden’s abuse of little girls here. The MFM buried that too.

Biden practically begs China to become a controlling part of the US. Not one person in the MFM reported that.

Biden claimed to have a plan to deal with the CCP virus. Now, he has no plan. More accurately, Biden’s plan is Trump II. The MFM rolled over for that as well.

And then there’s Hunter.

Biden erupted when asked about Hunter on the campaign trail.

I asked Joe Biden: What is your response to the NYPost story about your son, sir?

He called it a “smear campaign” and then went after me. “I know you’d ask it. I have no response, it’s another smear campaign, right up your alley, those are the questions you always ask.” pic.twitter.com/Eo6VD4TqxD

And that was pretty much that. From then on it was “what’s your favorite color” and “what flavor ice cream do you like?”

This is the smartest man Joe Biden knows. 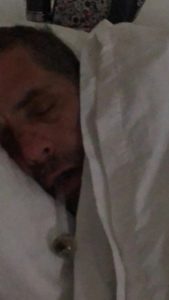 And now? Biden just trashes the question and walks away.

The MFM allow him to do that.

Seventeen percent of Biden voters would not have voted for him had they known about Hunter and the China connection.  That’s more than enough to change the outcome.

Now the MFM is rigging the election in Georgia in the same manner- suppression. Here’s some of what is being squashed.

Warnock worked at a church that hosted Fidel Castro.

Warnock wants to dismantle the value system of the US

🚨 Here’s Raphael Warnock urging his church to join him in “dismantling the value system of the American empire” in a 2017 speech: pic.twitter.com/tlv2U7biAm

“I’ve tried to keep the way he acts under wraps for a long time, and today he crossed a line…. And he is a great actor.”

Bodycam footage of police responding to the domestic dispute between Raphael Warnock and his then wife aired just now on Tucker pic.twitter.com/tCr5KpyXv6

A domestic altercation between a Republican Senate candidate and his wife would be splattered everywhere. This one?

Jon Ossoff’s company was paid thousands of dollars by Al Jazeera. He has ties to a Chinese company owned in part by the CCP. Ossoff is a dad-made man. All his money comes from daddy, who is thick with Chinese higher-ups.

Richard Ossoff, who has bankrolled his son’s upstart political career, commissioned China-based Jet-Tern Marine to build the custom vessel in 2008, U.S. Coast Guard records show. Before shipping the yacht to the United States, the company held a “sea trial” for “customers Heather and Richard Ossoff, of Atlanta, Georgia, USA,” in order to test the million-dollar vessel’s performance, with “many” Chinese dignitaries in attendance.

“The Selene 1519 sea trial was attended by the customers, many dignitaries from Pingsha and Zhuhai, the press, the Deputy Governor, the Bureau Chief, and the editor of China Boating magazine,” a since-deleted press release stated. “At many times as many as 40-50 people were aboard but the large yacht never felt crowded.”

As a member of Congress Ossoff voted against the Payroll Protection Program while his multimillionaire father sucked the loans down.

The wealthy father of Georgia Democratic Senate candidate Jon Ossoff, who has given thousands to his son’s campaigns, took a Paycheck Protection Program loan of as much as $1 million as Ossoff argued that the program favors the rich.

Richard Ossoff’s Atlanta-based company Strafford Publications, Inc., received between $350,000 and $1 million from the PPP on June 9. The loan saved 30 jobs, according to federal records. PPP was part of the CARES ACT, a federal coronavirus relief bill.

The elder Ossoff, a Harvard Business School graduate and former consultant at McKinsey & Co., founded Strafford in 1984. The company has an estimated $28 million in annual revenue and amassed Ossoff a fortune that allowed him to purchase a private jet in 2014. He has donated $32,100 to Democrats in the 2020 cycle, including $8,400 to his son’s Senate campaign, and spent thousands on his son’s failed House campaign in 2017.

Jon Ossoff said in April that the CARES Act did not help people truly in need and ripped PPP for only benefiting wealthy Americans.

The MFM reports none of this. They rigged the Presidential election and they are rigging Georgia through their dereliction.

Stacey Abrams is strangely quiet. I have no doubt she has as many magical ballots as she will need to overcome a Perdue or Loeffler victory. Between her and the MFM this election is already done.

Worse, with dems in complete control of the country this is the future of all electoral contests. Voting is meaningless.

Democrats are no longer Americans. They are committing sedition.

You can see how desperately Democrats depend upon the media shield to their survival. Biden is a total idiot. He has been for years, has NOTHING successful in his resume (other than a lucrative political career) and has been nothing but a lackey his entire life. There there’s these two shitbirds. If they were anything other than Democrats, they wouldn’t even run for office because they would know they would have absolutely no chance of surviving their records. It also shows Democrats are bereft of any talent that can benefit our country. ALL their top names are anti-American and seek to wreck anything that makes this nation strong and successful.

Given the truth, the nation would reject them with extreme prejudice.

Sadly, these 3 words are today more accurate and profoundly distressing than most of us would have ever thought possible just months ago.

President Trump won re-election. There is statistically no other possibility. The massive evidence of fraud is undeniable regardless what Globalist Marxists proclaim.

The Republicans in Congress have also long ignored the pernicious fraud in local politics which have kept Dems in power throughout America in cities like Chicago, Detroit, Baltimore, etc. Fraud has kept the poor “under thumb” and the elite and its pols in power.

The guy from Dominion committed perjury before congress

No election of any federal office should be certified if using any of these machines….ever.

@PhillipMarlowe: We aren’t the ones celebrating fraud and the destruction of our electoral system, scooter. Perhaps “fucking nuts” is turning a blind eye to massive evidence of Democrat voter fraud and expecting the rest of the nation to quietly accept it.

1. A 10 year old can write an algorithm to “flip” votes as they are counted by these simplistic machines.
2. 99% of the media has been turned into a vast trolling machine — it doesn’t want to know and just repeats what its masters command.
3. Wall Street’s senior banker globalists have won and the billionaires they created and now control like Zuck, etc., do their bidding.
4. Any computer connected to the Internet is corruptible and suspect.

Did they? Do you honestly believe this is the first rigged election, that people in California voted for shit on the sidewalks? We just have to end these crooked elections here and now demand proof the election went to Biden.

Well… hundreds of thousands anyway. China, Iran, Dominion and Smartmatic did the rest.

We just have to end these crooked elections here and now demand proof the election went to Biden.

You know you can’t prove a negative and Biden as President is the biggest negative one can imagine.

And “you guys” think Biden is the President.