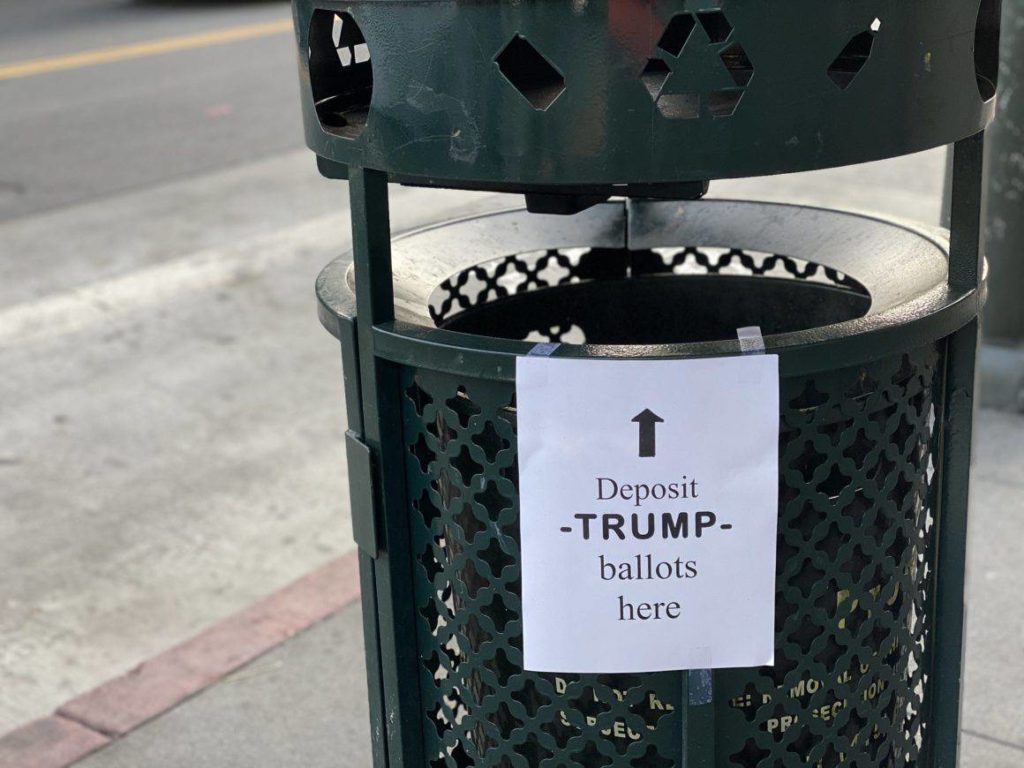 It’s been pretty depressing of late.

Two days ago Saudi granted Israel permission to use Saudi airspace. There was a time when the media would have said “This is a big f**king deal.”

Witness after witness testifies to voting irregularities in many states, from voting machines being connected to the internet to truck drivers testifying that they transported completed ballots from New York to Pennsylvania. Servers under court orders were wiped and moved. Poll watchers were thrown out of polling stations. Witnesses have been beaten. And no one pays attention. Here is a great read for you from someone who knows what he’s talking about.

I hope to God I am wrong but I think Georgia is in the bag. Stacy Abrams, the mouth from the Peach State probably has about 10 million votes already printed and in hand for each Senatorial candidate.

Trump 5 months ago: Open the schools

Fauci 5 months ago: Opening the schools is too dangerous

The left wing media shoves that down the memory hole. They ignored a whole lot more. The left wing media now is fully integrated with the DNC. They refused to report anything that would reflect poorly on Biden while reporting every single last morsel on Trump.  They didn’t ask about Hunter Biden’s business dealings. They didn’t pay a whit of attention to Tony Bobulinski. Biden extorted Ukraine and they let it go. They seized upon every Trump malaprop but were stone cold silent about Biden’s obvious mental decline.

Yesterday he lost his mask minutes after taking it off.

The left wing media censored utterly all of the negative stories about Biden and that might have been the difference in the election:

If it weren’t for the Leftist media’s coverup of negative stories about Joe Biden, President Trump would have likely already been declared the winner of the 2020 presidential election, according to a new poll of swing state Biden supporters conducted by the Media Research Center (MRC).

The poll surveyed 1,750 Biden voters across Wisconsin, Pennsylvania, Nevada, Michigan, Georgia, Arizona and North Carolina and found that the media’s censorship of both positive Trump stories and negative Biden stories actually cost Trump the election (that is, if you believe Biden legally “won” the race).

And the media continues to lie about Republicans whenever it can:

The latest instance of a media outlet trying to dunk on Gov. Noem was Tuesday when CBS News filed the below report on coronavirus outbreaks in South Dakota and Indiana. Reporter David Begnaud stated in the news report that South Dakota “leads the nation in per capita hospitalizations.”

The big problem with Begnaud’s reporting on South Dakota is that it suggests that the state’s hospitals are at their breaking point. Except they’re not, and Gov. Noem proved it with receipts in response to the story:

Not once during the BLM/Antifa violence did the left wing media properly identify those committing it.

Small business confidence crashed after the election. What- you didn’t hear about it? Of course not. the forces behind Biden are all for Big Tech and Big Corporations, not for the working stiff.

After demanding you not eat at restaurants, democrat mayors and governors do exactly what they tell you not to do. The left wing media doesn’t touch it.

No longer will appointees be recruited based on skills, experience or talent. No, that’s so yesterday. Now they will be diversity-based, meaning based purely on skin color and some kind of gender

WATCH: Tucker Carlson calls out NASDAQ's new diversity requirements, noting that the term itself is undefined and arbitrary. pic.twitter.com/AnMumjJGpr

It’s comprised of obama retreads like Neera Tanden who was the wretched purveyor of vicious Russian collusion lies.

From his excellent article

This conspiracy-mongering led by Tanden and other prominent liberal activists had a corrosive effect on the ability of Democrats to perceive basic reality, to put that mildly. A 2018 poll from Economist/YouGov — conducted more than a year after Trump’s inauguration — found that a large majority of Democrats (66%) believe that “Russia tampered with vote tallies in order to get Donald Trump elected President.”

Antony Blinken, who had a stint as deputy secretary during the second Obama term, returns to Foggy Bottom as secretary of State. As the top U.S. envoy to the world, he will be more inclined toward the Obama view of America as an unexceptional nation rather than uphold the Trump foreign policy of “America first.”

John Kerry, who led the Obama State Department, has signed on as climate policy chief to lead U.S. efforts toward rejoining the 2016 Paris Climate Accords. Mr. Trump sensibly withdrew from the agreement that would have placed heavy restrictions on the U.S. economy, already one of the world’s most innovative in reducing greenhouse gases.

Jake Sullivan is the Biden choice for national security adviser, a position he held in Mr. Biden‘s vice-presidential office. Mr. Sullivan played a senior role in the Obama nuclear negotiations with Iran, experience that will come in handy in his new job. Mr. Biden has vowed to petition the Islamic regime for a do-over of the nuclear deal, which Mr. Trump canceled in 2018.

Janet Yellen, who served as Mr. Obama’s chairman of the Federal Reserve, has been tapped for secretary of the Treasury. Washington watchers are beset with marvel over the appointment as a first for a female, as if surprised that a woman might be up to the task of handling the national till.

Jake Sullivan is an especially malignant participant. Which leads us to Friedman’s interview of Biden. The highlights?

He had written that “if Iran returns to strict compliance with the nuclear deal, the United States would rejoin the agreement as a starting point for follow-on negotiations,” and lift the sanctions on Iran that Trump imposed.

That alone proves what an idiot Biden is. The agreement stunk to hell and Iran violated it from day one:

All of this, of course, prompts an obvious question: How could Fakhrizadeh and SPND continue to operate during the Iran nuclear deal when the deal was premised on Iran’s commitment to an exclusively peaceful nuclear program? Indeed, the existence of SPND and the discovery of Iran’s nuclear archive paints a picture of regime that never truly halted its nuclear weapons program — but instead separated its pieces, keeping its personnel fresh and ready for a time of Iran’s choosing.

That reality was deliberately obfuscated to sell the 2015 Iran nuclear deal. Iran deal supporters wanted the world to believe that Iran had left its nuclear ambitions in the past. To clear the way for the deal, the International Atomic Energy Agency (IAEA) was pressured to close the book on Iran’s past activities and remove issues related to Iran’s undeclared nuclear work from the agency’s agenda. Outstanding questions were left unresolved. Iran was required to respond to questions posed by the IAEA — but under the terms of the nuclear deal, those responses could remain incomplete, untruthful and unverifiable for sanctions relief to follow.

Reminder: obama paid Iran a billion dollars in cash and it went to weapons and terrorism.

Remember the $152 billion in credit & cash that the Obama admin allowed Iran's regime to access?

Not a dime was spent on the people. pic.twitter.com/N5XKW1vv2W

Trump has Iran isolated and over a barrel while forging peace accords all around them.

Biden will f**k that up totally.

Iran says it'll enrich uranium to 20% to pressure Biden to hand over billions of dollars for IRGC terrorism.

The wrong response: I'm very scared. I'll give you billions of dollars to stop.

Biden also wants to re-impose the idiotic Paris Accord back onto the US despite it doing nothing other than solely punishing the United States.

Despite China killing more than a quarter of a million people in the US with its virus Biden is eager to kiss their collective ass. Big Tech and Big Corporations want to score more from China and probably so do James and Hunter Biden.

“The best China strategy, I think, is one which gets every one of our — or at least what used to be our — allies on the same page. It’s going to be a major priority for me in the opening weeks of my presidency to try to get us back on the same page with our allies.”

Which is exactly what Trump was doing.

The fact is, China has ruined the world in 2020 by its reckless handling of COVID-19. For this, it ought to pay very heavy reparations. It will not. Instead, the reverse is happening. China’s economy is powering ahead, and its leaders are bullying weaker Western nations. With Trump all but gone from the White House, and faltering Joe Biden preparing to move in, it now looks as though China’s quest for world domination is back on track. What a calamity.

In the interview Biden adds:

And this time, he insisted, rural America will not be left behind. There is no way Democrats can go another four years and lose almost every rural county in America. For their sake and the country’s, Democrats have to figure out what is going on there and speak to rural voters more effectively.

“You know, it really does go to the issue of dignity, how you treat people,” Biden said. “I think they just feel forgotten. I think we forgot them.”

On one way, none of this will matter because the left wing media has become the US’s Pravda. If a war breaks out the media won’t cover it. If Biden visits China with Hunter and James in his wake with millions of dollars falling out of their pockets on the way to Air Force One, the media will bury it. If Biden again extorts a foreign country to enrich his family the media won’t report it.

There is no freedom without a free press and we have no free press.

Now we have an dementia-addled old man for President with an “America Last” philosophy.

Until 2022. Then we take back the House and impeach Biden.