Why I would have told Chris Wallace to f**k off 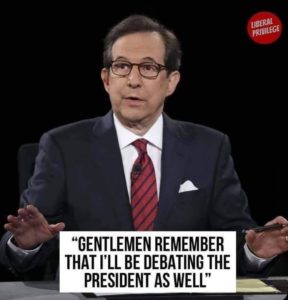 The more I think about it, the angrier it makes me. Chris Wallace wanted Donald Trump to jump through his hoop and Trump refused. It began this way

Okay, you have repeatedly criticized the Vice President for not specifically calling out antifa and other left-wing groups. But are you willing, tonight, to condemn white supremacists and militia groups? And to say that they need to stand down and not add to the violence in a number of these cities, as we saw in Kenosha, as we’ve seen in Portland? Are you prepared specifically to do that?

Trump answered and then asked for specificity

Sure, I’m prepared to do it. I would say- I would say, almost everything I see is from the left-wing, not from the right wing-

I’m willing to do anything I want to see peace.

Wallace cut him off and Biden interjects

This is about where I would have told both of them to f**k off for a couple of reasons.

First, despite whatever else you might think of them, the Proud Boys can hardly be called white supremacists

“I will go out and say that the #ProudBoys as a whole, I will say this on behalf of the entire national organization, denounce white supremacy." – Thad, Chief of the Proud Boys Salt Lake Utah Chapter pic.twitter.com/WGlUEx3jeF

If Wallace were a real news man instead of a partisan hack he would have known this. Biden is an ignorant idiot.

Second, not only has Donald Trump repeatedly denounced white supremacists

The Media really doesn’t want you to see this video.

If they wanted people to know the truth they wouldn’t be asking the same question for 4 years straight.
pic.twitter.com/BIZW6GXK8H

See it for yourself. It was a setup by Racist Hoaxer Chris Wallace! pic.twitter.com/BbxsJs2BTI

Wallace never asked Biden to denounce Antifa or Black Lives Matter, who are doing all the burning, pillaging, injuring cops and looting of American cities.

Chris Wallace is a partisan hack and put it all on a disgraceful display. He tried to force Trump to say the words he and Biden wanted Trump to say. He has no business doing that. 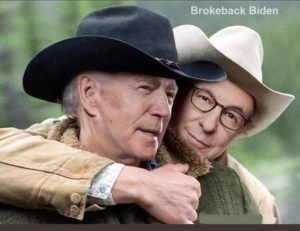 Good for Trump for not jumping through Wallace’s hoops and not telling Wallace to f**k off.

And while we’re at it, Jim Acosta also needs to be told to f**k off. (via Notthebee.com)  Note the dates 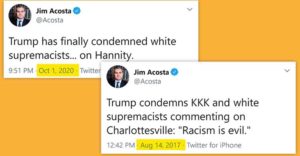 Joe Biden, you are a lying dog-faced pony soldier. Here you are lying on video. https://t.co/eYrhdl6LoI