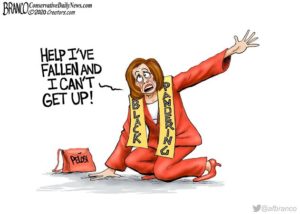 Welcome back! Another week that makes us wonder what The Radical Left can do to further demonstrate that they’ve completely lost their minds. They never disappoint, if that’s teh word for it:

I’ve never been a fan of online petitions in general, so if you see one here you can be sure it’s something I feel strongly about. More info here. Please sign and share!

6/12 – Who Will Protect Us From the Lawlessness of Democrats?

Hint: It’s not the same people who want to abolish the 2nd Amendment

Because soem tragets are easier to attack than others

Friendly advice to Law Enforcement: You need every ally you can get right now. Antagonizing the people who aren’t calling for your destruction isn’t the smart move right now.

It will probably happen around the time that they wante to tear down MLK for being insufficently woke.

6/15 – CNN’s Brian Stelter goes on the attack, only to have his prey turn on him

Want to watch The Tater get slapped around a bit? Of course you do.

6/15 – The cancellation of LIVE PD and Cops: The era of censorship

I’ve never been a fan of reality TV in general nor of “Cops”, but this post makes a good argument for the show’s value

6/16 – Popular Mechanics Is Now #Woke #Resitance Media, Too: Details How to Safely (Illegally) Tear Down a Statue You Don’t Like

Yes, this is the same publication that once gave us the sober special issue debunking the 9/11 Truthers. Is there any publication left in teh print media that The Radical Left hasn’t destroyed?

Serious question for the Lefties: While I don’t agree with this movement to destroy every Confederate statue, I do get your arguments. So if these pieces of our past need to be removed, how are you OK with a Governor who had a racist nickname and in his yearbook page posed in blackface next to a guy in a Klan hood? And why are you now cheering on Separatists who have seceded from America, walling off their own fortresses in cities with an armed force, strict border control and ID check?

6/18 – Live By the Sword, Die By It: The Delicious Downfall Of Rick Wilson

Want to watch a Vichy Conservative get slapped around a bit? Of course you do. You should have listened to Tom Araya’s sage advice, Rick!

The stereotypical Antifa is White, Skinny, Vegan, a failed Artist, hopped up on stimulants, wears a special uniform, advocates for violence to resolve problems, and blames someone else for their problems.

Actually, @SenSchumer, we are following the law…in fact, the same law that prohibits non-citizens from receiving U.S. taxpayer-funded student aid like loans and Pell grants…a law you, by the way, voted for. https://t.co/v2mpVJXkNo


When George Orwell wrote that the future was a boot stamping on a human face forever, I don’t think he knew how many people would identify with the boot.

I wonder if civic leaders would be supporting the revocation of qualified immunity for officers would feel the same if THEY were subject to being sued for their incompetence? THERE’S where the legal action needs to be aimed.

I wonder if businesses will expect progress reports and positive results, on a business-like basis, for the expenditure of their millions? It would be interesting to see how they measure “progress”. But wait… is that CAPITALISM that is providing that $454 million? I guess we’ll wait a while to eliminate that.

6/12 – Who Will Protect Us From the Lawlessness of Democrats?

Well, certainly not Democrats. Their Sturmabteilung in Seattle is handing scary, dangerous, evil “assault weapons” out to anyone that steps up and says they are 18 and can handle a weapon. Now, how is he keeping track of those weapons? When this “utopia” breaks down and those punks that have been handed those weapons come to realize they’ve been sold out, become outraged and go to a school that is not only a “gun free zone” but has had it’s resource officers run off and REALLY racks up an impressive body count, will it be the NRA’s fault again?

Social distancing has been rendered moot. The left-wing promoted riots and looting destroyed any benefit derived from the economy and Americans taking a trillion dollar quarantine hit.

Well, the reform bill the Democrats are pushing, the “Gentle Enforcement Systemic Trust Accountable Police Opportunity Act” (which will be known by its acronym) will make us all safer.

6/15 – CNN’s Brian Stelter goes on the attack, only to have his prey turn on him

It is hilarious to see these self-important putzes get offended when their lies are called out and their corruption exposed.

6/15 – The cancellation of LIVE PD and Cops: The era of censorship

The left cannot abide by such examples of the REAL way the police deal with citizens interrupting their exploitation of the relatively rare abuse or accident that can be turned into a racial event.

6/16 – Popular Mechanics Is Now #Woke #Resitance Media, Too: Details How to Safely (Illegally) Tear Down a Statue You Don’t Like

Well, because YOU’RE A RACIST, DAMN YOU!!!

6/18 – Live By the Sword, Die By It: The Delicious Downfall Of Rick Wilson

Maybe he can kneel and genuflect before racism for forgiveness.

Those guys are great.

not one politician took and any responsibility-9/11 total screw up and fbi/cia failure and everybody walked to better paying jobs/
-wally-mart $100 million- 60 % of demonstrators are illiterate, good move wally-mart just another form of socialistic behavior
-mayor of baltimore is pure 100% corrupt garbage SFB’s. recall the last mayor is now in prison.
-cops need all the friends they can get, but shaking down a 5th graders room is OK because they can harass the shit of the parents and child and not get hurt.
-stelter is not the brightest rock in the box and is two sandwiches short of a picnic
basket on brains. he has a problem with alcohol similar to bar fly pelosi.
-cancellation of cops is just another kiss my ass by a struggling network.
-stop buying chick-fil-a, ceo asks every white cracker to shine the shoes of every black man as repentance for being white.

Cops Search Fifth-Grader’s House After BB Gun Shows Up On Webcam During Virtual School
Oh my did it look like one of these or was it a red rider? #3 is my fav, part of every happy childhood should be to tear down and reassemble blind folded.
Sweeties says put him at the family basement bar and make sure to catch all the bottles of booze and a carton of Marlboros, then next day a churches altar, there are many things that trigger these ducks.
This weeks selection goes out to the screenshot asshole

Maybe he can kneel and genuflect before racism for forgiveness.

stop buying chick-fil-a, ceo asks every white cracker to shine the shoes of every black man as repentance for being white.

At least the lines will be shorter now

things that trigger these ducks.
This weeks selection goes out to the screenshot asshole

To which S.O.D agrees:

[…] Flopping Aces has the Sunday Funnies (last week’s). And this week in radical leftism. […]