Arguably the best pick Trump ever made 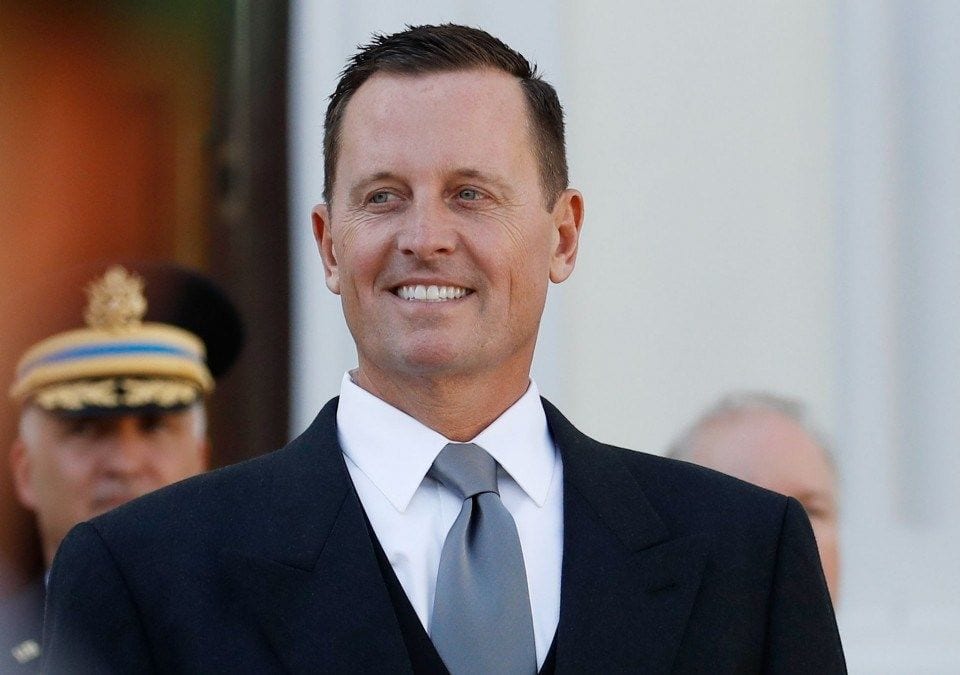 In 2018 Donald Trump nominated Richard Grenell to be Ambassador to Germany and he was confirmed on April 26. Forty two democrat Senators voted against Grenell, who is gay. Grenell is “the first openly gay U.S. ambassador to Germany and the most senior openly gay executive official in American history.”  In 2012 he was driven from Mitt Romney’s campaign, critics would say for being gay.

On Tuesday, Grenell openly criticized Germany’s defense spending, arguing that it sent a “worrisome signal” to NATO allies. Those comments led to swift and severe backlash from several members of parliament.

Last summer, Grenell also drew criticism shortly after his appointment over comments he made in an interview with right-wing Breitbart News. “I absolutely want to empower other conservatives throughout Europe, other leaders,” the ambassador said. “I think there is a groundswell of conservative policies that are taking hold because of the failed policies of the left.”

Some German politicians called him a “brat.”

You have to love that.

On February 19, Trump appointed Grenell Acting Director of National Intelligence to the dismay of many liberals.

It has paid off handsomely.

He began cleaning house, something that has disturbed Adam Schiff, also known as “bastard.”

“Congress has neither authorized organizational changes at ODNI, nor appropriated funds for that purpose,” Schiff wrote. “The committee is concerned, moreover, by the removal or departure of every Senate-confirmed official at ODNI, as well as of other senior officials across ODNI’s leadership team, including [National Counterterrorism Center] Acting Director Russell Travers and Acting Deputy Director Peter Hall.”

An explanation can be seen at Lidblog:

This (Travers) is someone who probably knows quite a bit about the things John Brennan had a heavy hand in from 2003 all the way to January 2017.  He was positioned to know essential things about one of the core aspects of Spygate: who had access to the sensitive surveillance data that set the March 2016 blow-up in motion – and very possibly why they had it.  This bears watching: it has the look of a puzzle piece fitting quietly into place.

Anything that irritates Adam Schiff has got to be the right thing to do.

The next day Grenell slammed Schiff:

Schiff, D-Calif., on Tuesday, penned a letter to Grenell laying out his concerns with the acting director’s staffing changes in the Office of National Intelligence.

But Grenell slammed Schiff, saying the press received that letter before he did.

“His letter was sent to the press before it was sent to me,” Grenell tweeted late Tuesday. “These press leaks politicizing the intelligence community must stop.”

Schiff’s letter said Grenell was “pursuing organizational and personnel changes” in ODNI “without consulting and seeking authorization from Congress and in a manner that undermines critical intelligence functions.”

That wasn’t the end of it

Schiff had expressed “concern that you are pursuing organizational and personnel changes at the Office of the Director of National Intelligence without consulting and seeking authorization from Congress and in a manner that undermines critical intelligence functions.” He claimed that “this effort appears to be proceeding despite the coronavirus pandemic and amid indications, exemplified by a March 10 briefing to members of Congress, of political interference in the production and dissemination of intelligence.”

Again, Grenell wasn’t going to put up with Schiff’s crap:

“I must begin by voicing my surprise that your four-page letter said nothing about the historic appointment of the first female Director of the National Counterterrorism Center,” Grenell told Schiff. “Instead, you expressed concerns regarding the retirement of the former male Director. You erroneously cast judgment on the reason of his departure while ignoring the accomplishments of NCTC’s new leadership, two highly qualified female officers serving as the Acting Director and Acting Deputy Director. Diversity of the IC workforce should always be celebrated, and I am proud that we increased diversity within the ODNI’s senior ranks, to include more women and members of the LGBT community.”

“Reports indicate that one or more members of your staff may be inappropriately interfering with the production and briefing of intelligence information on election security to Congress.” The Democrat said, “This politicization of intelligence would constitute a grave breach of your duty as Acting DNI to preserve the independence of the IC.”

“I am compelled to defend these career officers from unsubstantiated indictments of their motivations and judgment.” The spy chief added, “I must disagree with your proposals to divest the DNI of managerial competence and personnel decision-making authority, and to replace your committee’s mandate for Intelligence Community oversight with a mandate for IC administration.”

Then CNN tried to intimidate Grenell:

At the moment, Adam Schiff is up to his bulging eyeballs in a cover-up.

“[House Permanent Select Committee on Intelligence] Democrats opposed every Republican document request and subpoena that helped to expose malfeasance in the FBI’s Russia collusion probe. And now, by refusing to publish the witness transcripts or the transcript of the committee’s briefing with former [Intelligence Community Inspector General] Michael Atkinson, the Democrats are blatantly continuing to hide documents that expose their own mistruths,” Republican California Rep. Devin Nunes told the Washington Examiner last week. “There is no reason for keeping these documents secret except that they want to hide what’s in them.”

The editorial board said it appears Schiff “wants to shield promoters of the collusion theory from scrutiny.”

“Mr. Schiff spent years shouting cover-up only to be exposed for making things up. Now that the evidence is ready for public release, he’s defying the unanimous vote of a bipartisan committee to make them public,” the paper said. “What doesn’t Mr. Schiff want America to see?”

Grenell is continuing to clean house and streamline

Created after the Sept. 11, 2001 terror attacks to ensure better communication and coordination between the 17 main intelligence agencies, ODNI had swelled by this year to 1,800 employees — many with senior salaries — and a similar number of contractors.

Insiders, like Dan Hoffman and Ellen McCarthy, Assistant Secretary of State for Intelligence and Research, are applauding the effort.

Hoffman, the retired CIA officer, said the shifting of resources out of ODNI back to spy agencies will pay dividends.

“Sending our officers back to their home agencies where they can accomplish this mission is best for our nation’s security,” he said.

This is great stuff and I fully expect Grenell to find and help to weed out the obama loyalists bent on destroying Trump. And getting under Schiff’s skin?

Amb Grenell probably wouldn’t even be with us had it not been for his spouse during his bout with cancer starting in 2013.

Matt Lashey came up with ChemoWave when his partner Richard Grenell was diagnosed with cancer in 2013.

Nowadays many cancer patients are encouraged by their doctors to use this free app that allows you to create graphs based on how you’re doing hourly and daily.
It helps doctors streamline their treatments, see what’s working for you and what isn’t.
Grenell survived a cancer that doesn’t have a high survival rate because of ChemoWave.

We’re privileged to have him serving our country so bravely these days.
And its Trump who gets called the “homophobe,” the “sexist,” the “racist.”

Schiff is losing his eyes and ears in the Executive Branch and is panicking. If he tries to cultivate new sources he could step right into a sting, similar to what Trump pulled to give select information to different people to find out who was doing the leaking; Schiff was flushed out as a scumbag leaker.

Maybe Trump should withhold funds from California until they vote this twat out of office. If only…. if only.

If the only reason this guy was confirmed was to irritate the Psycho Bastard hes a damn fine pick.

…something that has disturbed Adam Schiff, also known as “bastard.”

That actually made me laugh out loud. I loved “Bastard” post the other day.

@Chigna Tu Madre: Schiff being a scumbag has nothing to do with anything Jewish. Perhaps your anti-Semitism would be better appreciated on some left wing site. Get out of here.

: generally, a person who does not like chosen parasites, feeling or showing hostility toward international bankers, holy chosen nation robbers, or discrimination against pederasts, pornographers, or other hook-nosed rat like creatures from East of the Sinai Peninsula.