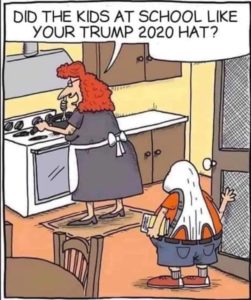 Last week I wrote about how the second wealthiest county in the United States was engaged in Leftist income redistribution – taking money from the poor and dropping it into the pockets of the wealthy.  There were a few other points that my original post missed.

If you missed my original post (linked above), Fairfax County’s school district is moving to replace its regular school buses with electric powered school buses. Initial efforts to get the state to use it via a tax dollar wealth transfer was saved by a grant of energy dollars from Dominion Power. One obvious problem wit this that I forgot to mention last week is the fact that electric buses are unreliable. Don’t take my word for it:

But largely unbeknownst to the public, BYD’s electric buses are contending with a record of poor performance and mechanical problems.

A Times investigation found its buses stalled on hills, required service calls much more frequently than older buses and had unpredictable driving ranges below advertised distances, which were impaired by the heat, the cold or the way drivers braked.

A federal testing center and transit agencies across the country logged driving ranges that were dozens of miles short of company claims, limiting the routes they can handle and requiring passengers to shuffle onto replacement buses when the batteries go low.

The first five buses BYD sent to Los Angeles Metro were pulled off the road after less than five months of service. Internal emails and other agency records show that agency staff called them “unsuitable,” poorly made and unreliable for more than 100 miles. Despite strong concerns from its own staff about the quality and reliability of the company’s vehicles, the transit agency awarded BYD tens of millions of dollars more in public contracts.

Who is this source of #AntiScienceFlatEarthClimateHolocaust Denialism? That Conservative stalwart…. the LA Times. Of course, it makes sense that this would be ignored, since while us Normals view California as a warning, Leftists view it as a blueprint. Then again, given what is being forced onto the students of Virginia these days, I’d be OK with Little Bob missing some time from school.

There was another angle to this I missed. The comments section had a great time mocking this, but one made me realize that the original post would need a follow up. Via Flopping Aces commenter Deplorable Me:

I would say that if Dominion Energy can provide the 50 buses and install the energy infrastructure to keep them charged for Fairfax County, their rates are probably too high and energy costs hit the lower and middle class much harder than they affect the wealthy.

Exactly. If a public utility has all of this extra money, why not cut electricity rates? This would be a perfect case of progressive tax relief, as a $100 electricity bill in the summer hits minimum wage workers a lot harder than Beltway Bandit millionaires.

For that matter, isn’t pushing electric buses nothing more than a corporation cynically making a “charitable donation” that will ultimately push an increase in demand for its planet destroying product? I though that one of the Sacraments of Climastrology was to reduce demand for fossil fuel energy – is this not an effort to increase its demand?

For all that Leftists claim to crusade against fossil fuel consumption and income inequality, it’s odd that they contribute to what they call problems at every opportunity.

You should face ridicule if you don’t believe in my God.

My God’s power can destroy nations. And will.

Giving money to my God will save the world.

Everything proves my God’s existence.

Nothing can disprove it.

Centuries of data back it up.

..but enough about climate change.

This boomers reaction is save money privatize the busing system, maybe trans Ubers.

back in the 1970’s or 80’s it was Forced busing the kids to schools outside the District now its electric Buses Anyone care for Home or Private Schooling?

@Spurwing Plover: Busses that dont work it must be evil rich whites reversing forced busing! You are genius.

Gosh, thanks for the recognition. I just wonder when people are going to recognize that solar or wind generation is NOT the answer to replacing fossil fuel and we don’t have the technology yet for electric heavy vehicles. To the left, all that matters is the ideology. Failure can always be blamed on someone else.

@Deplorable Me: How easily they can overlook the carbon footprint of making a new bus rather than running an older model, not to mention the little children in Africa used to mine the materials for the batteries, who have no school.

@kitt: Aside from lying, another remarkable talent liberals possess is ignoring the harmful effects of their policies.

@Deplorable Me: #4: Hey, I had to give props! If my dumb a** had spotted that angle the first time around I wouldn’t have needed a follow up post!

@kitt: #5: Same with new “green” buildings – the greenest car, building, etc. is the one that never has to be built

@Brother Bob: Sure, we wouldn’t want some coming on here and accusing you of “stealing”, would we? And, we know they would.