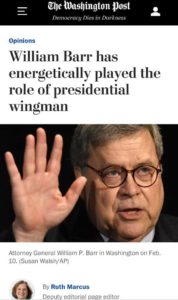 How many times have I said it?

It’s an axiom. You can just about bet your life on it.

democrats have been hammering on Bill Barr for his supposed partisan support of Donald Trump.

Senate Democrats unloaded on Attorney General William Barr on Friday, accusing him and other top Justice Department officials of trying to “undermine the administration of justice” and urging him to resign.

The letter, spearheaded by Sen. Elizabeth Warren (D-Mass.), comes after the Department of Justice (DOJ) sparked a political firestorm when it recommended a lesser sentence for Trump associate Roger Stone, contradicting the federal prosecutors working on the case.

The senators said they were sending the letter to Barr to “express … alarm and opposition to the unethical political intervention.”

“This is an extraordinary turn of events. It appears to show that you and other top DOJ officials intervened in a clearly political fashion to undermine the administration of justice at the President’s behest in order to protect a well-connected political ally who committed a ‘direct and brazen attack on the rule of law,'” the senators wrote.

They added that the reversal of the sentencing recommendation by DOJ leadership “is a clear violation of your duty to defend fair, impartial and equal justice for all Americans. As a result, we call on you to resign immediately.”

Attacking Barr is nothing new for democrats. Neither is the MO.

Democrats are stepping up their criticisms of Attorney General William Barr, seeking to sideline him from future decisions about investigating President Trump.

Several Democratic presidential candidates and senior lawmakers are calling on Barr to resign or recuse himself from future Department of Justice decisions related to further investigations and prosecutions based on special counsel Robert Mueller’s report.

They went on the attack after it was reported Tuesday night that Mueller wrote a letter to Barr in late March objecting to the way the attorney general characterized his report in a four-page letter delivered to Congress on March 24.

In testimony before the Senate Judiciary Committee on Wednesday, Barr characterized Mueller’s letter as “a bit snitty” while also telling senators that the special counsel complained about how the media reported on Barr’s summary of the report.

“seeking to sideline him from future decisions about investigating President Trump.”

There it is. Barr is a threat- a threat to uncover the truth about dems utilizing the resources of the Federal government to at first deny election to Trump and then later to frame him as a Russian tool.

You might remember that we’ve seen this show before. dems were successfully able to sideline both Devin Nunes and Jeff Sessions with for garbage ethics violation allegations. Both were taken out as they got closer and closer to the truth.

Keeping Nunes out of the loop was the whole idea.

It is clear that democrats are doing everything they can to impair any probes into wrongdoing on the part of the obama administration and it DOJ and FBI. Crippling Sessions was key to the effort to undermine Trump as President and allow a witch hunt to be set in motion. Nunes was sidelined as long as possible to delay his participation in uncovering the broader conspiracy.

democrats will rue the day they dug these holes. The truth can be buried for just so long and they’re running out of dirt. As this continues, do pay attention to the cacophony from the left. As we creep closer to uncovering the scale of this obstruction the voices of left wing Indignation Choir will grow strong.

But as I said, liberals have zero long term memory, but we do.

Attorney General Eric Holder brushed off a question Thursday about when he might leave the administration. Instead, the top lawman professed his allegiance to President Barack Obama.

“I’m still enjoying what I’m doing, there’s still work to be done.  I’m still the President’s wing-man, so I’m there with my boy.  So we’ll see,” Holder said in an interview on the Tom Joyner radio show.

Barr has been accused of putting his finger on the scales of Justice. Let’s crank up the Wayback Machine and check out some other events:

Obama sent a signal to his DOJ and to James Comey- telling them he wanted Hillary Clinton off the hook:

In his appearance on Fox News Sunday with Chris Wallace, President Obama told Americans not to worry, because “I guarantee that there is no political influence in any investigation conducted by the Justice Department, or the FBI, not just in this case, but in any case. … Guaranteed. Full stop.”

But the reason the email affair of the Democrats’ presidential front-runner is so important is that it has already been proved that she handled classified information, after categorically denying doing so, through the private server she set up at her home in New York state. Unlike protected government communications, those emails could have been intercepted or later compromised by foreign governments like those of Russia or China, or by nongovernmental personnel tied to terrorists.

So when President Obama went on to double down on his claim last year that “I can tell that you this is not a situation in which America’s national security was endangered,” he was doing, as president, exactly what he was promising not to do — interfering.

In fact, he was declaring her innocent before she has been proven guilty or not guilty.

“That’s not what happened,” he said. Rather, he said, IRS officials were confused about how to implement the law governing those kinds of tax-exempt groups.

“There were some bone-headed decisions,” Obama conceded.

He acknowledged that then-IRS Commissioner Doug Shulman had been to the White House more than 100 times but said he couldn’t recall speaking to him on any of those occasions.

Lois Lerner pleaded the Fifth and walked away scot free. The IRS “apologized” for targeting conservatives, but no one paid a price. Sound familiar?

obama didn’t just put his finger on the scales of Justice. He knocked them over altogether and crushed them under his feet.

Given their absence of concern when obama and holder grossly abused government for their own political benefit I cannot regard seriously anything dems whine about today.

McCabe is not the only one lacking candor.