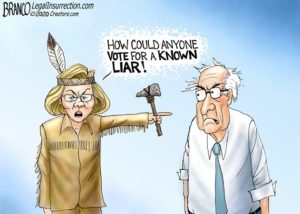 Welcome back! Hopefully you’ve recovered from your Super Bowl hangover and are getting by getting your sports fix from hockey and hoops. Or just enjoy Lefty insanity! Like this:

More of this, please. There’s just not enough popcorn in the world!

This post turned out to be a lot more interesting than I thought it would be – the title had me thinking it would be a Surveillance State piece.

Turning Point visited Cuba and made a powerful video that is well worth 14 minutes of your time. Behold Bernie & Gulag Barbie’s vision for America’s future

No, it’s not just a summary of the Democratic Party’s platform. This one talks about the insane 1619 Project’s effort to rewrite American history

2/5 – Horowitz: How Trump can turn his SOTU smackdown of sanctuary cities into action

This sounds too brilliant and practical to actually happen

2/6 – WATCH: AOC Viciously Mocks Rush, Calls It “Nauseating” that he Was Honored

Kurt Schlichter’s tribute to Rush was so dead on IO’ll cite the most relevant piece to sum up Gulag Barbie’s sentiment:

How they hate him. His announcement was met by determination and faith from his friends and vile delight by his enemies on the left. Did you see a single major Democrat take to social media to wish him well? Keep that in mind when they invite you to disarm.

2/7 – Why are so many Democratic/liberal women so insecure about their looks?

I was genuinely surprised to see an actual article written here. I was expecting to click and find five words below the header pic: “Because Leftist women are ugly”

No archives this week. I’m publishing this piece from 33,000 feet flying home from a brief Florida invasion of Legoland. Although over two days our six trips on the Ninjago ride fell well short of last year’s thirteen, this year that was supplemented by seven trips on the Wild Safari roller coaster. I hope you’re having a great weekend!

And since this was a mini vacation week for me, this week’s tweets are only funny ones (OK, maybe not the one I wrote). Fans of Animal House will love the last one!

If you play back the video in slomo you can see Pelosi blinking in Morse code, "OK Rashida. I did it, now please release my grandchildren"

‘You’re A Piece Of Shit And I Hope Everyone Like You Dies,’ Says Biden To Democratic Voter In Stirring Call For Party Unity https://t.co/C7bHyyrumq pic.twitter.com/hL2vGoUnuC

I actually see people pasting this kind of garbage to their Facebook page. They don’t realize that if THA is what they see as bad, things are really pretty damn good.

We see liberals currently complaining about the deficits (never having ever mentioned $10 TRILLION in deficits racked up in 8 years by Obama) as if their very own Democrats don’t have a hand in blocking cuts and passing budgets. So, as they complain about not being able to pay our bills now, they want to add from $3 to $9 trillion a year to our spending (depending on how socialistic you are willing to vote).

Of course, this is already a political weapon. It just isn’t efficient to sit around and wait for someone you want to destroy to actually commit some self-destructive act. Sometimes, they just need a little help.

Hey! Let’s get us some of that good utopia!

Racism COULD be eradicated here were it not for the usefulness the left sees in using it as a political weapon. As we see, they have to lie about who is a racist and why in order to present themselves as the less-racist alternative.

2/5 – Horowitz: How Trump can turn his SOTU smackdown of sanctuary cities into action

Again, the MEDIA is the culprit. Trump can only reach so many people, but an illegal immigrant that has been arrested multiple times, released and protected from ICE detention going out and murdering innocent people is a big news story, yet the media will not cover it or thousands of other similar stories. THIS would drive public demand to change self-serving illegal immigration defense.

2/6 – WATCH: AOC Viciously Mocks Rush, Calls It “Nauseating” that he Was Honored

Sadly, the esteem of the Medal has been diminished. I mean, Obama gave Ellen and Biden one. Might as well put them in boxes of cereal now. Like the Nobel.

2/7 – Why are so many Democratic/liberal women so insecure about their looks?

Maybe the answer is to look at things for what they are instead of trying to find insult, oppression, assault or injustice in everything. Instead of suffragettes, they were more merely insufferable.

@kitt: As much as I find Steve Bannon annoying, his suggestion that Bloomberg is trying to buy the DNC seems to be more than just some tinfoil hattery

Instead of suffragettes, they were more merely insufferable.

Summed it up perfectly!

@Brother Bob: ABC couldnt find a custom gold plated stepstool for mini mike for tonights debate.
1.1 million per vote its, cant buy me love.
Watched the debate the platform remains Get Trump, and we are all a bunch of racists but loads of money can fix that.

Why are so many Democratic/liberal women so insecure about their looks?

Lefties want equality-of-outcome in place of the reality of our equality-of-opportunity.
If they don’t have those great bodies, no one should…..its triggering to them.

@kitt: It’s pretty scary, especially looking at what Bloomberg helped bankroll here in Virginia. He doesn’t want to be the head of the Democratic Party – he wants to own it. Literally.

@Nan G: Or to give a great oversimplification of the difference between our sides: gratitude vs. entitlement. Conservatives appreciate what we have, while Leftists are perpetually angry over not having what they believe they’re entitled to

@Brother Bob: That’s why I believe every criminal is inherently liberal. They think other people don’t deserve to have what they have and believe themselves to be entitled to take it.

Stop flying through my Jetwash Mavrick or i’ll tell Jester

@Deplorable Me: Or to give an even simpler difference between our ideologies: entitlement vs. gratitude