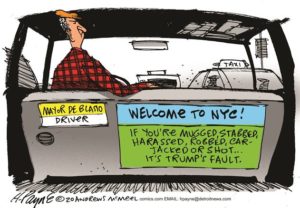 If you haven’t heard, The combination of The Democratic Party’s long march to take over Virginia, combined with the state and national Republican Party’s long term plans to surrender the state to the Democrats, have resulted in Democrats seizing (to use a favorite term of The Left) both houses of the state legislator in the 2019 elections while Democratic Governor Coonman weathered his scandal from last year to continue his occupation (another of their favorite terms) of the Governor’s mansion.

Democrats have wasted no time pouncing to punish the citizens of Virginia, but their most ambitious agenda is taking steps to abolish The Second Amendment, which Governor Infanticide is ready to sign into law.

Unsurprisingly, American citizens tend to get a bit uppity when the government decides to shred the Constitution to advance a radical agenda to treat law abiding citizens like criminals. This is why on Monday, January 20th, Pro-American groups will be rallying in the state capitol of Richmond. Governor Byrd is already setting the stage to ensure that there will be a violent confrontation between the pro liberty groups and the counter rioters who will be arriving in black masks, carrying bike locks and pepper spray, assaulting journalists and police officers under the completely ironic name of “Anti-Fascists”.

Virginia Democrats are hoping for a repeat of Charlottesville in 2017, when Democratic Socialists clashed with the spiritual successors of The National Socialist Workers’ Party (I try to make it a point to refer to this group by their official title, as Lefties seem to have trouble with this concept). The most important takeaway from this is that Leftists’ hope for a modern Reichstag Fire could be used to justify a power grab were dashed. Unfortunately law enforcements’ efforts to allow a violent riot resulted in one poor woman getting killed by one of these scumbags. Expect more of the same this time around.

Which brings me to the point of this post. Governor Jimmy Kimmel wants a violent confrontation more than anything. This will help him and The Radicals that run the mainstream press to “prove” that their draconian measures are only the beginning of what is necessary to disarm Virginians. I don’t think that there’s anything we can do to prevent any breakouts of violence – the government is well organized and will do everything in their power to herd the groups together for a clash. Don’t let them get away with this without being challenged. Your most important weapon is your phone, or more importantly, the camera in it.

Record everything. When you see the police standing by while fights break out in front of them, zoom in on the badges of the cops standing by. Identify the supervisor and get in his face to ask why he’s not doing anything. If he won’t answer get the name of who gave his orders. If you see them giving masked thugs a pass while harassing peacefully protesting citizens zoom in on every part of the scene you can. The MSM will be doing everything in their power to push a false narrative – it is critical that we have the ammunition needed to fire back. Governor Trudeau is ready for this fight, and since I’ve been dropping some great Heartbreak Ridge quotes lately, let’s close with another great one that can make a great rallying cry:

“Don’t give that (Northam) the satisfaction.”