obama sold us out for thirty pieces of Iranian silver 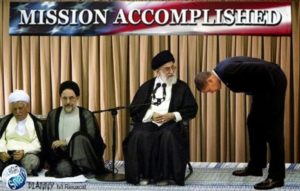 It was all so strange. Why were democrats so protective of Qasem Soleimani? Why did they side so strongly with Iran over the United States? Why were they emphatic about protecting the pathetic Iran deal which Iran has been violating since day one?

A few days ago Michael Doran,Senior Director for the Middle East under Bush, sent out a tweet

I found this astonishing. Now Lee Smith has fleshed it out.

Because the fact is that the Democrats are not pro-terrorist. They’re simply intent on protecting the historic agreement that legalized the nuclear weapons program of a terror state.

Democratic leadership is angry it wasn’t briefed before the operation, as were some Republican lawmakers critical of the scant information in the White House intelligence briefing on the attack. But there is reason to believe senior Democrats would have leaked it to the press, as they’ve done repeatedly over the last three years to prosecute their anti-Trump campaign. In particular, House Intelligence Committee Chair Adam Schiff and his staff have used CNN as a platform to push the discredited Trump-Russia collusion narrative. Why would Democrats endanger U.S. national security by leaking highly classified plans of a major operation against a terror leader? Because Soleimani was the centerpiece of the nuclear deal.

The Iran agreement was designed to allow Iran to have a nuclear bomb by the end of the second term of obama’s successor.

In 2023, the U.N. ban on assistance to Iran’s ballistic missile program will end. The ban on the manufacture of advanced centrifuges will begin to expire, shortening the amount of time it will take to build a bomb. Perhaps most importantly, in 2025, the U.N. snapback mechanism allowing the U.S. to reimpose sanctions will expire, meaning that we would need to persuade Russia and China to restore international sanctions on Iran. The effect is that there is nothing short of military action to stop the Iranians from marching toward the bomb. It was Obama who said that by years 13, 14, or 15 of the deal Iran would be within a hairbreadth of a nuclear bomb By 2031 with all nuclear restrictions lifted, the Islamic Republic will have a full-scale nuclear weapons program.

The most infamous payoff was the $1.7 billion in cash the administration shipped off to the IRGC on wooden pallets in exchange for U.S. citizens held hostage by the regime. The White House said that there was no “quid pro quo,” that it was Iran’s money to begin with—$400 million the pre-revolutionary government had deposited in 1979 to buy U.S. arms, plus interest. But the U.S. had already used the $400 million to compensate terror victims of the Islamic Republic. That was Iran’s money. The $400 million the Obama administration used to “pay back” the Iranians belonged to the U.S. taxpayer.

obama designed the deal to cripple the next President:

If this all seems unbelievable, it’s because it is—and also because you’re probably still imagining that Obama’s goal was to prevent Iran from getting a nuclear weapon. But once you understand the real purpose, these moves become much clearer. To wit: Why did Obama give the regime enough uranium to make 10 nuclear bombs? To pressure the incoming Trump administration to stick with the nuclear deal. If Trump chose to leave the JCPOA, he’d have to deal with the fact that with 130 tons of uranium already on hand Iran had an easier path to the bomb. In effect, the last president handed the Iranians a loaded gun to be pointed at his successor.

Trump would have none of this and blew Soleimani and the deal away. Now foction writer Ben Rhodes’ attack on Trump also makes sense. He boasted that he could make the press swallow anything he said

“we can tell journalists anything and they’ll believe it”

He could not bamboozle Trump.

To me the worst of this is obama’s dealing from a position of fealty to Soleimani and Iran. While Soleimani was killing and dismembering US soldiers obama was negotiating with Soliemani to protect obama’s legacy. Nothing mattered- not turning troops into hamburger, not testing ballistic missiles, not seizing Naval gunboats and humiliating the crew. And while this was ongoing, obama released the sanctions on Soleimani in 2015.

In 2015, when the JCPOA went into effect, Soleimani was removed from the U.N. sanctions list, a provision that, according to press reports at the time, the Iranians saw as “nonnegotiable.” That’s how Obama wanted it, too.

Sanctions relief to someone actively killing Americans? I found that sickening.

Nothing mattered but obama’s ego. We’ve been on this stupid deal –here, here, here and here– but I didn’t know that obama was begging Soleimani for scraps. His deal should be called the JCPOS.

Be sure to read the entire Smith article.

Trump is not going to kiss Iranian ass for his own benefit as did obama. obama bowed to the devil. He sold out this country for thirty pieces of silver. For more background on the JCPOA, follow this thread- Goldberg knows what he’s talking about:

#Iran must not be allowed to have its nuclear cake and eat its sunsets too. That is the phrase you’ll hear me use over and over, and it is the reason the snapback of UNSCR 2231 needs to happen as soon as possible. Let me explain in the context of today’s announcement by the E3.