How to Talk to Your Kids About the Situation With Iran 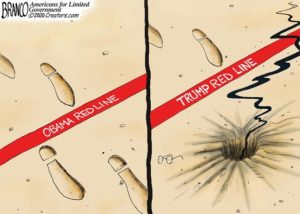 After the death of The Radical Left’s latest hero, Iranian terrorist Qasem Soleimani, Time Magazine published an insanely stupid article even by Leftist standards, How to Talk to Your Kids About the Situation With Iran. It goes exactly as you’d expect, but here’s a taste of some weapons grade Libtarditude:

Why did the U.S. take action against Soleimani?

President Donald Trump has called Soleimani a terrorist. Trump says Soleimani ordered attacks on American military and diplomats and was planning attacks against Americans in the Middle East. For this reason, Trump ordered the U.S. military to kill Soleimani. The drone attack took place at an airport in Baghdad, in Iraq. An Iraqi leader was also killed.

The U.S. strike came after a series of recent attacks by Iran against Americans in Iraq. On Dec. 27, a rocket strike killed one American civilian and wounded several U.S. service members. There was also a Dec. 31 attack on the U.S. embassy in Iraq. Trump says Soleimani ordered these attacks.

Yes, “called Soleimani a terrorist.” I could write about a thousand words on all of the stupidity that gets dropped in this article, but I’d rather take amore constructive approach and provide answers that any functional adult and responsible parent would give.

Who was Qasem Soleimani?


Soleimani was a terrorist scumbag who was responsible for the deaths of over 600 American troops. He got cocky by traveling in Iraq after ordering an attack on our embassy in Iraq. Letting him live would have resulted in more American deaths and suffering by civilians in the Middle East, so he had to die.

Why did the U.S. take action against Soleimani?

Soleimani was a terrorist scumbag who was responsible for the deaths of over 600 American troops. He got cocky by traveling in Iraq after ordering an attack on our embassy in Iraq. Letting him live would have resulted in more American deaths and suffering by civilians in the Middle East, so he had to die.

The tyrants who rule the Iranian people were understandably confused. They’ve come to expect attacks on Americans to be rewarded with pallets of cash. Needing to save some face, they responded with an empty gesture that would make it appear that they were hitting back. Iran launched several rockets intended to not cause any damage that would lead to US retaliation. So Iran was careful to not hurt anyone with these rocket launches. Unless you count the Ukrainian airliner that they shot out of the sky.

What will the U.S. do if Iran retaliates?

Count on in kind retaliation. Iran’s symbolic gesture got an appropriate response. If the Iranian Thugocracy chooses to escalate, expect more of the same from the United States.

Why don’t the U.S. and Iran get along?

Not all Americans have an issue with a regime that hangs gays from construction cranes, stones women to death for adultery, and uses children to clear mine fields. There is a specific subset of Americans who support the Iranian leadership, and they call themselves “Democrats”.

Does the killing of Soleimani mean the U.S. and Iran are going to war?

Not if those (people of questionable parentage) who rule Iran want to continue to exist.

If my child is feeling worried, what should I do?

This is going to be the most difficult question for you to answer, but if a child who’s young enough that xir’s (I’m assuming that’s the pronoun you told your boy or girl to use) biggest concerns aren’t about princesses, Pokemon or superheroes, the problem is the parenting. I’ll be writing a bigger post on this subject in the not too distant future, but the short answer is that you’re a selfish person and a terrible parent. Find an adult to give you some advice.

So there you have it! If you have any further questions feel free to hit me up in the comments section below!

NYT reporter suggests American press, by being criticized for poor reporting and other failures, suffers similarly to journalists in Iran, who are imprisoned, tortured, and murdered for their reporting. All this while American media downplays or ignores Iran’s lies. https://t.co/98W0g7Nt9T

Really? Because I was given to understand that "Soleimani, who commands a cult-like status in the country, has seemingly united Iranians of all political stripes in anger at the US." https://t.co/GvvwdEj1TR https://t.co/2gAFrybYcx

2019: if you could stop Baby Hitler from killing his own people, it's GOOD.

Last week: Trump stops man who kills his own people from further killing, and this is BAD.

Today: Iran has peacefully ended the conflict by shooting down a plane and killing 176, which is Trump's fault.

Gosh, I wish that article had been available sooner. I discussed the killing of Soleimani with my grandsons not long after it happened. We laughed and laughed and laughed. I guess I should have done more to make these kids hate their country instead of understanding how our military keeps them safe.

My error. I beg forgiveness. Maybe I can shove an old man wearing a MAGA cap down in the mud as atonement.

@Spurwing Plover: Don’t worry – Solei will be their person of the year for 2020

My error. I beg forgiveness. Maybe I can shove an old man wearing a MAGA cap down in the mud as atonement.

I got better things to talk about with my grand kids.
Wipe your damn feet, whats with dragging all that mud into my kitchen.
Its too cold for popsicles wanna cookie?
CENSORED….I swear to God if I step on one more leggo Im going to throw every last one into the recycle bin.

@kitt: Be grateful none of your grandkids have this set! =8^)

@kitt:
Be grateful Jacks are no longer popular.
Those miserable little caltrops…