“Donald Trump has made us all (in the media) stupid” 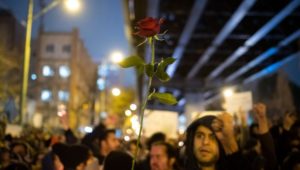 This week: Who knew they hated Soleimani and Khamenei? But it’s still Trump’s fault!

Donald Trump has frequently referred to the left wing media as the “enemy of the people.” They then cry about it and whine about a free press but then go on to prove Trump was right.

The press shoved down our throats the notion that the people of Iran loved Qasem Soleimani despite him killing 1500 Iranian protesters last November. Chris Matthews likened Soleimani to Elvis and Princess Diana. The press was impressed with the numbers of mourners without even bothering to note that the “mourners” were ordered into the streets. Schools and shops were ordered closed. They either mourned or they died.

Soleimani also was responsible for the deaths and maiming of thousands of American soldiers.

Soleimani was the head of the Islamic Revolutionary Guard Corps (IRGC).  Iran has admitted that the Republican Guard shot down the Ukrainian jet. They assert that it was an “accident” but given their mendacity one has to wonder.

The flames of the wreckage were not yet out when the left wing derelict media began blaming not the Islamic Revolutionary Guard Corps, but Trump. Joy Reid spit out the language of her Iranian handlers.

No democrat blamed the Islamic Revolutionary Guard Corps. Not one.

No one in the left wing media blamed the Islamic Revolutionary Guard, which actually accepted the blame.

“The officials, including aviation authorities, who kept denying a missile hit, are not guilty. We are to blame for everything.”

In 2016 the head of the IRGC aerospace division bragged that anyone in the Guard Corps had the authority to shoot down any aircraft.

No, say democrats. No, says the left wing media. It’s all Trump’s fault.

They refuse to trash the US and Israel. Boy is this going to piss democrats and the media off.

Student protesters at Melli University in Tehran refuse to walk over US & Israeli flags in defiance of the regime. pic.twitter.com/4qJUKEHthq

Watch what happens when some do

This is a marvelous thing to witness

Tehran: University students chanting “Soleimani is a murderer. His leader, Ali Khamenei is also a murderer.” Protest by thousands of Iranians in Tehran burst the propaganda balloon of the regime regarding Qassem Soleimani’s elimination. #Iran #IranPlaneCrash Via #MEK network. pic.twitter.com/n0hmasMSgj

Jake Tapper has had an epiphany, otherwise known as cover your ass.

It turns out plenty of Iranians loathed Soleimani, opposed the terrorism he spread, and don’t like the regime lying to them about shooting down a passenger plane. And they’re risking quite a bit by protesting publicly — https://t.co/c5P2VmLyHB

David Brooks, the perennial blind squirrel, found an acorn. He said “Trump has made us all stupid.”

By being so overwrought and exaggerated, the echo chamber drowned out any practical conversation about how to stabilize the Middle East so we could have another righteous chorus of “Donald Trump is a monster!”

Indeed. Trump has made the media/democrat echo chamber stupid.

Donald Trump posted tweets in support of the protests. This is how they were received:

That is going to cause democrat heads to explode. As of this writing not one democrat has signaled support for the Iranian protesters.

The Democrats’ problem is that there is not ONE of them that can tell the others, “Do you have ANY idea how ridiculous you look and sound?” Of course, some of us have tried that here, but it seems these Democrats simply don’t care; being cast out from their crybaby club for not being blinded by hate enough is too steep a penalty to pay for mere sanity, it seems.

Yes, Democrats are going to have a hard time explaining these Iranian’s behavior. As per their predictable behavior, though Brooks admits they allow their sore-loser obsession to blind them from facts, they can’t accept responsibility. Trump is to blame because Trump exists. It’s Trump’s fault Democrats cannot accept disappointment. It’s Trump’s fault they can’t act like adults. It’s Trump’s fault that they have to lie about Trump’s behavior just to HAVE something to feed their hatred. Those protesters killed this week? THAT’S Trump’s fault too, because if Trump wasn’t restoring the respect and honor of this country, those Iranians would not be able to perceive the lies their own government was telling them and wouldn’t have been protesting.

I wonder if we can’t trade a few dozen million of these Democrats for some of the citizens of Hong Kong and Iran? Talk about making America GREAT… imagine trading those who despise this country for some that APPRECIATE it.

As of this writing not one democrat has signaled support for the Iranian protesters.

They are going to lose anyway who remembers them in a short time, history doesnt.
Eveyone that opposes Trump is a hero.Wonder what the Mullah will do for not saying Achmed was killed not martyred. Gregs in big trouble for that offense too.

Where is greggie? Changing his pants!

They know and still behave evil, call your local PBS and demand they tell the truth.
https://twitter.com/hashtag/IranRegimeChange?src=hash&ref_src=twsrc%5Etfw
https://twitter.com/AlHadath/status/1216389551188520962/video/1
Clashes broke out between Iranian protesters and security forces in Tehran as gunfire was reported in Azadi Square in Tehran, according to the Al Hadath news agency. Video being circulated from Tehran showed at least one woman reportedly injured after being shot by security forces. Additional videos from the Iranian capital showed security forces storming protesters, as protests continued to spread to additional cities throughout the country.
https://twitter.com/AlinejadMasih/status/1216390231974457346/video/1
These are peaceful protestors.

@Randy: He ran out of panty liners. Poor dear, his world is caving in and he doesn’t know how to handle it. Hint Greggie, just admit you were wrong and move on.

How can any true American support the totalitarian Communists of China and Mullahs of Iran against their freedom-loving and America-loving people? Only the anti-American Dems. Leftists love enslavement of the populace, and totalitarian rule. As Mike Bloomberg said, we can’t have average Americans doing anything they want, going anywhere they want, owning guns and drinking Big Gulps.

@kitt: Yet we know who the left sides with; the oppressive, totalitarian Islamists.