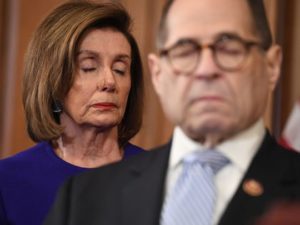 The farcical hearings yesterday were intentionally conducted on the very day the IG report was released so as to be a shiny object distracting the country from findings of the DOJ Inspector General. To add more farce to the pile today dems are introducing two articles of impeachment, presumably the ones that had the best resonance in focus groups- abuse of power and obstruction of justice.

As Andy McCarthy notes, it is abuse of power and obstruction of justice to investigate democrat corruption:

The public wonders: What’s the rush? After all, Democrats apparently didn’t think the “crisis” was so dire that their Thanksgiving holiday should be postponed. In 11 months, the American people will be able to boot President Trump from office if they believe he is unfit. So why should the political class be permitted to pre-empt voters?

Finally, Democrats have come up with an answer: Trump must be removed, because he is bent on colluding with foreign powers to interfere in our elections; he will do it “again” if he isn’t stripped of power.

“Again,” of course, hearkens back to the Democrats’ Russia “collusion” narrative. They can’t let go of that narrative, notwithstanding the fact that the Mueller probe debunked it. In their revisionist history, Trump’s quip that he hoped Russia would find the 30,000 emails Hillary Clinton destroyed somehow proves the scheme that a score of aggressive prosecutors couldn’t find.

Plainly, Trump was trying to draw attention to his opponent’s misconduct. Indeed, the theory of the investigators and Democrats, for two years running, was that Trump was a hireling of the Kremlin, not that he was giving Putin orders.

The point is this: Democrats regard as impeachable “interference” any effort to investigate or draw attention to their known or suspected misconduct.

Indeed and thus today dems enacted their mission of vengeance on Trump for winning the 2016 election.

Nadler led off the nonsense:

Adam Schiff adds to the lies:

One more time? That presumes Trump cheated in the 2016- which is absolutely a lie.

Back on December 4, Nadler said this

“President Trump welcomed foreign interference in the 2016 election.  He demanded it for the 2020 election.  In both cases, he got caught.  And in both cases, he did everything in his power to prevent the American people from learning the truth about his conduct.”

Demand? There were no demands.

He did everything he could to prevent the American people from knowing what he did- by allowing Vindman and a dozen other people to listen in on the call? Right. Totally logical.

Nadler has said that Trump will continue to seek foreign interference in US elections.

The question is – how?

How does asking Ukraine to investigate corruption amount to foreign interference in US elections? As I’ve said before, Biden is not yet the nominee and thus is not yet the opponent. But more than that, this impeachment effort is an admission by Nadler, Schiff and Pelosi that the Biden’s are guilty of corruption.

If the Biden’s are not guilty, what was to be feared in a Ukrainian investigation?

If democrats would argue that the Ukrainian government might wrongly point a finger at the Biden’s because of endemic corruption then Trump is vindicated. If the Biden’s are innocent they and the dems have nothing to fear.

The Biden’s are clearly guilty of corruption.

Lindsey Graham has said that he would dispose of this quickly in the Senate. That’s the wrong thing to do. It should be a long drawn out process that utterly and completely destroys the democrat party.

It is the dems who are guilty of abuse of power. Impeachment as a punishment for winning an election sets a very ugly standard for this country.

As if they could give a damn.