Whistleblowers are sacred to democrats, but only if they harm the GOP 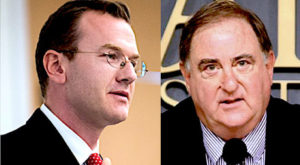 These latest developments reveal the expansive nature of what is now a Justice Department criminal probe into the FBI’s investigation into the Trump campaign. The revelation also comes on the heels of DOJ Inspector General Michael Horowitz’s report regarding the bureau’s investigation into the Trump campaign and Russia. Sen. Lindsey Graham, R-SC, announced to Fox News’ Sean Hannity Wednesday night the lengthy investigative report will be released to the public on Dec., 9.

This appears to focus directly on Stefan Halper

Multiple sources confirmed to this news site that Durham has spoken extensively with sources working in the Office of Net Assessment, as well as outside contractors, that were paid through Pentagon office.

Department of Justice officials declined to comment on Durham’s probe.

In 2016, Halper was an integral part of the FBI’s investigation into short-term Trump campaign volunteer, Carter Page and George Papadopolous. Halper first made contact with Page at his seminar in July 2016. Page, who was already on the FBI’s radar, was accused at the time of being sympathetic to Russia. Halper stayed in contact with Page until September 2017.

Halper is a long time CIA asset and without a doubt is up to his eyeballs in the anti-Trump conspiracy. This recent news reminded me of how Stefan Halper came to the American consciousness and how very differently things can go for people depending on whose ox you might be goring.

WASHINGTON – The whistleblower who filed an anonymous complaint about President Donald Trump asking Ukraine to investigate a political rival has reached an agreement to testify before Congress, Rep. Adam Schiff announced Sunday.

Talking with  ABC News’ “This Week,” Schiff, the Democrat who chairs the House Intelligence Committee, said the whistleblower would testify “very soon” and the only thing standing in the way was getting security clearances for the attorneys representing the whistleblower so they could attend the testimony.

But then word leaked that Ciaramella had contacted Schiff’s office before filing his complaint- which Schiff lied about and got 4 Pinocchios from the Washington Post. Schiff the promptly announced Ciaramella would not need to testify. They needed to protect him and his identity.

“Given that we already have the call record, we don’t need the whistleblower who wasn’t on the call to tell us what took place during the call,” Rep. Adam Schiff (D-CA) said in an interview on CBS’s “Face the Nation.”

You will remember that Schiff repeatedly (and wrongly) stipulated that the whistlelblower had a “statutory right to anonymity” which got him 3 Pinocchios from the Washington Post. Ciaramella’s lawyer reminded us that any retaliation against Ciaramella would be a violation of the law.

So as you can see, democrats really care a lot about whistleblowers.

Except when they don’t.

In January 2017 Adam Lovinger was selected by Michael Flynn to be part of the National Security Counsel after 12 years at the Office of Net Assessment as a Strategic Affairs analyst.

Then on May 1, 2017 he was stripped of his security clearance and demoted. He had made the grievous offense of discovering that Stefan Halper was being paid to spy on Americans.

In an internal October 2016 email to higher-ups, Mr. Lovinger wrote of “the moral hazard associated with the Washington Headquarters Services contracting with Stefan Halper,” the complaint said. It said Mr. Baker hired Mr. Halper to “conduct foreign relations,” a job that should be confined to government officials.

“It was a topic of conversation within the office,” Mr. Bigley told The Times. “What is Halper doing, and why is he being paid astronomically more than others similarly situated?”

The Office of Net Assessment conducts analyses of future threats and ways to defeat them.

“Nobody in the office seemed to know what Halper was doing for his money,” Mr. Bigley said. “Adam said Jim Baker, the director, kept Halper’s contracts very close to the vest. And nobody seemed to have any idea what he was doing at the time. He subcontracted out a good chunk of it to other academics. He would compile them all and then collect the balance as his fee as a middleman. That was very unusual.”

The “Mr. Baker” would be James Baker. You can read all about him here.

Mr. Bigley filed a complaint July 18 with the Pentagon’s senior ethics official, charging that Mr. Lovinger’s superiors misused the security clearance process to punish him. He said his client complained about excessive “sweetheart” deals for Mr. Halper and for a “best friend” of Chelsea Clinton.

Now pay attention to this:

The Office of Net Assessment conducts analyses of future threats and ways to defeat them.

Except when it doesn’t.

In the fall of 2016, as the election loomed, Mr. Lovinger sent emails to Mr. Baker and other officials at the Office of Net Assessment complaining about the entire outside contracting process. He also said the office failed to write papers on long-term threats presented by radical Islam, China and Iran.

Obama’s most favored nations after Russia.

Why was Lovinger so harshly punished? Because he outed the source of the Russiagate smears- Halper

Stefan Halper is a known long-time operative for the CIA/FBI. He was paid exorbitant sums by the FBI/CIA/DOD through the Department of Defense Department’s Office of Net Assessment in 2016. His tasks seem to have included slandering Mr. Flynn with accusations of having an affair with a young professor (a British national of Russian descent) Flynn met at an official dinner at Cambridge University when he was head of DIA in 2014. Flynn has requested the records of Col. James Baker because he was Halper’s ‘handler’ in the Office of Net Assessment in the Pentagon, and ONA Director Baker regularly lunched with Washington Post Reporter David Ignatius. Baker is believed to be the person who illegally leaked the transcript of Mr. Flynn’s calls to Ignatius. The defense has requested the phone records of James Clapper to confirm his contacts with Washington Post reporter Ignatius—especially on January 10, 2017, when Clapper told Ignatius in words to the effect of ‘take the kill shot on Flynn.’ It cannot escape mention that the press has long had transcripts of the Kislyak calls that the government has denied to the defense.

Andrew’s article later served as the second confirmation needed for outlets like the Wall Street Journal, New York Times, and Washington Post to run stories about Flynn and a supposed Russian spy. But before those pieces hit the press, Lokhova remained in the dark about the media’s interest in her.

“Halper had been pushing the story that I was a Russian spy and Flynn’s mistress since December of 2016,” Lokhova told me. “The New York Times’ Mathew Rosenberg told me a source had been circulating these stories since December 2016,” Lokhova said, “but they held the story until they could find a second source and someone at the Cambridge dinner.”

Some whistleblowers are more sacred than others, it seems.

Don’t forget that obama prosecuting more whistleblowers under the Espionage Act than all previous Presidents combined and democrats couldn’t give a rat’s ass about any of them as they could not visit harm to Trump or any Republican.

Moreover, this demonstrates the bald and sheer filthy hypocrisy of democrats. So, in an adaptation of the fact checking system of the loathsome Washington Post, I award the democrat party 4 FU’s.