A tale of two Presidents: obama grew ISIS, Trump is wiping it out 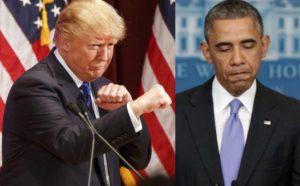 In the wake of the demise of ISIS leader Abu Bakr al-Baghdadi it seems a good time to remember how ISIS can to be what it was. The origin of ISIS is said to have gone this way

Abu Bakr al-Baghdadi came to helm of al-Qaeda in Iraq in 2010 after serving as long as four years in the U.S. prison facility Camp Bucca along with other future top ISIS officials. But after taking power in 2011, al-Baghdadi cut off ties with al-Qaeda and changed the name of the group to the Islamic State in Iraq. He targeted Shiites and planned to unite the Arab world under a single Sunni regime. In 2013, he changed the group’s name to the Islamic State of Iraq and Greater Syria (ISIS) to reflect the expanded ambition.

Today on CBS This Morning, “expert” Fran Townsend stated that while Bin Laden dreamed of establishing a caliphate, al Baghdad did it. And Baghdadi did it under barack obama’s nose.

The actual release date of Baghdadi is in dispute but it is agreed upon that he spent time in Camp Bucca. Bucca was closed and emptied of prisoners after obama declared the war in Iraq over and began withdrawing US troops in 2011. It was the departure from Iraq and the overthrow of Libya that gave ISIS it room to grow and metastasize. n

The Islamic State “was, you know, pretty much decimated when US forces were there in Iraq. It had maybe 700-or-so adherents left. And then it grew quite a bit in the last several years, when it split then from al Qaeda in Syria, and set up its own organization,” Brennan said.

Under obama it grew significantly

American Enterprise Institute scholar Marc Thiessen noted in a recent dispatch on Brennan’s remarks that this translates to around a 4,400 percent growth.

The rise of ISIS “surprised” obama

ISIS’ march across Iraq and Syria — a campaign that’s forced President Barack Obama to return small numbers of US troops to the region, even after touting an end to the decade-long ground offensives there — came as a surprise to US intelligence, the President told CNN in a new special report.

The terror organization’s rise in a tumultuous Middle East has provided Obama some of the toughest decisions of his presidency, choices that CNN’s Fareed Zakaria explores in “The Legacy of Barack Obama” airing Wednesday.

“The ability of ISIL to not just mass inside of Syria, but then to initiate major land offensives that took Mosul, for example, that was not on my intelligence radar screen,” Obama told Zakaria, using the administration’s term for the Islamic State terror group.

At that time, ISIS was confined to the immediate area of Iraq and Syria. President Obama famously referred to ISIS nine months later in January of 2014 as the “JV team.”  Just over a year later, however, according to ABC News, on “the second anniversary of the declaration of its Islamic ‘caliphate,’ or kingdom . . . the group has gone from obscurity . . .  to the world’s most brutal terrorist network, not only responsible for thousands of deaths in the Middle East but also linked to hundreds more in dozens of terrorist plots in the West.”

It’s too soon to say what steps the United States will take against ISIS in Syria, President Barack Obama said Thursday.

“I don’t want to put the cart before the horse,” Obama told reporters during a White House news briefing. “We don’t have a strategy yet.”

Obama said he’s asked America’s top defense officials to prepare “a range of options” about what the United States could do to go after ISIS in Syria, which he described as “a safe haven” for the Sunni extremist group that calls itself the Islamic State.

As late as 2015 Charles Krauthammer put it this way:

John McCain had the best line. He said when Obama says he doesn’t have a complete strategy perhaps he will tell us what his incomplete strategy or partial strategy, any idea of a strategy is. And the answer is there’s nothing here.

That was left to Donald Trump. Nine months after he took office US forces took Raqqa

Nine months after President Trump promised to defeat ISIS “quickly and effectively,” U.S.-backed forces captured Raqqa, which until Tuesday had served as the ISIS capital. The battle now is over who deserves credit: Trump or President Obama.

Before dismissing this as typical Trump self-aggrandizement, consider that for several years Obama insisted that a quick and decisive victory against ISIS was all but impossible.

After belittling ISIS as a “JV” team and then being surprised by its advances, Obama finally got around to announcing a strategy to “degrade and ultimately destroy” the militant Islamic group.

As his strategy dragged on and seemed to go nowhere, Obama kept telling the country that this was just the nature of the beast.

On Jan. 20 — the day Trump was inaugurated — an estimated 35,000 ISIS fighters held approximately 17,500 square miles of territory in both Iraq and Syria.

As of Dec. 21, the U.S. military estimates the remaining 1,000 or so fighters occupy roughly 1,900 squares miles of mostly barren desert primarily in Syria, where few people live, and where they will be forced to surrender or die.

Between September 2014 when the counter-ISIS campaign began, and January 2017, U.S.-backed forces in Iraq and Syria liberated 13,200 square miles of territory and 2.4 million people from Islamic State rule.

In the 11 months since Trump took office, an additional 15,570 square miles have been reclaimed and 5.3 million people have been liberated.

He is winning because he changed the rules of engagement:

Trump’s role in the transformation is not insignificant.

It is unfair to U.S. and coalition troops to claim, as Trump does, that they didn’t “fight to win” until he arrived in the Oval Office. But as the Times admits, there was one significant difference. In the spring, Trump loosened the rules of engagement to allow commanders in the field more authority in day-to-day decisions about fighting the enemy. Under Obama, the White House micromanaged the conflict in a manner that calls to mind the way President Lyndon Johnson and Defense Secretary Robert McNamara fought the Vietnam War with similar dismal results.

Trump loosened the rules of engagement to allow commanders in the field more authority in day-to-day decisions about fighting the enemy.

The Times and other Trump critics blame Trump for the increase in civilian casualties in the fighting against ISIS since then. But if you are going to link Trump to that statistic, it isn’t logical to assert that the new rules of engagement had nothing to do with freeing up the coalition to attack the enemy with more aggression. Though the number of air strikes hasn’t increased, their impact has been greater, and that is probably because competent military commanders in the field are making the decisions rather than civilian staffers posing as military experts in the White House situation room.

It’s true that the taking of Raqqa and the collapse of the caliphate as a functional state won’t end the war. ISIS fighters will probably reassemble to fight a guerilla war. Trump’s defense team will have to be nimble enough to adapt to the shift. Trump must also understand that the fight against ISIS shouldn’t distract the U.S. from Iran, which remains the main threat to Western interests in the region. Ultimately, he’s going to have to choose between his correct instinct to confront Tehran and his desire for better relations with Russia, Iran’s ally in Syria.

Yet none of that changes the fact that ISIS is being defeated on Trump’s watch and, at least in part, because of decisions he has made. There will be plenty that happens during his presidency for which he will deserve to be blamed but, his boasts notwithstanding, this victory also belongs to him.

obama left Trump a mess and Trump is cleaning it up. obama got credit for taking down Bin Laden, so should Trump get credit for ending al Baghdadi and decimating ISIS.

Townsend said getting al Baghdadi was a big deal and it made not only America safer, but Europe as well.

The story is not over, but these victories belong to Trump – the guy democrats so desperately want out of office.