What the eco-Nazis are doing to kids is criminal 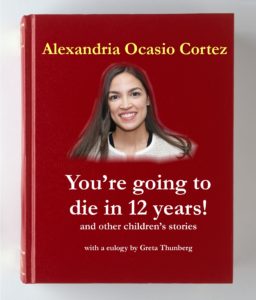 It’s been interesting an entertaining to observe as the issue of world climate has evolved from global warming to climate change to climate catastrophe. Everyone with a brain recognizes that this is simply socialism in drag. It is a vehicle meant for wealth transfer and really nothing more. The constant drumbeat is not without consequence, however.

Children are said to be suffering, and one of the messengers of doom is another child.

Few have been more vociferous about “climate change” than Alexandria Ocasio-Cortez, who uses it as a disguise for her true socialist ambitions. She now professes herself to be a climate scientist. As a member of that pantheon she’s ventured into the Al Gore University of Prognostication. Not long ago she proclaimed the end of the world in 12 years.

“I think the part of it that is generational is that millennials and people, in Gen Z, and all these folks that come after us are looking up and we’re like, the world is gonna end in 12 years if we don’t address climate change,” charged AOC. “And your biggest issue, your biggest issue is how are going to pay for it? — and like this is the war, this is our World War II.”

When the laughter subsided she then asserted it was really a joke but that didn’t her career as a clairvoyant. No sir. Recently she predicted that Miami would soon find itself in Davy Jones’ locker:

“When it comes to climate change, what is not realistic is not responding with a solution on the scale of the crisis — because what’s not realistic is Miami not existing in a few years,” the New York Democrat said Wednesday at an NAACP forum. “So we need to be realistic about the problem.”

Then we come to the newest post child actor- Greta Thunberg. She is a doozy.  For some reason, the UN takes this child and promotes her to world authority and she comes to NY and lays this on us

"You have stolen my dreams and my childhood with your empty words," climate activist Greta Thunberg tells the UN. "We are in the beginning of a mass extinction and all you can talk about is money and fairy tales of eternal economic growth. How dare you." https://t.co/F5Umw55Y5Y pic.twitter.com/K0WxGCeU4A

And good gosh, she and 15 other children have a filed a human rights complaint against 5 countries

Swedish climate activist Greta Thunberg and 15 other children filed a complaint with the United Nations Monday alleging that five of the world’s major economies have violated their human rights by not taking adequate action to stop the unfolding climate crisis.

The complaint was filed a short time after Thunberg delivered an impassioned rebuke to world leaders at the UN Climate Action Summit.

And those countries would be?

Neither China nor India- the two worst polluters in the world- are mentioned. I wonder why.

When Donald Trump arrived, he did not give her a second of attention, to her consternation

Greta Thunberg’s glare at Donald Trump is giving me the energy to get through this Monday pic.twitter.com/xdM0rdI2ln

This is a travesty. Using children as a prop and a shield against criticism is pathetic and abusive and it gets worse. Her parents are Antifa

Let’s leave aside the absurdity of entertaining children on the world stage for a moment. They’re abusing a child with an impairment. Greta is said to have an autism-related condition known as Asperger’s Syndrome, in addition to being OCD and exhibiting selective mutism.  Her jaded parents are using an impaired child as a front for their cause.

Thunberg is also a victim of the eco-Nazis:

As a key part of the talk, Thunberg describes how at the age of eleven, several years after learning about the concept of climate change for the first time, she fell into a depression and became ill. “I stopped talking. I stopped eating,” she explains. “In two months, I lost about ten kilos of weight. Later on I was diagnosed with Asperger’s Syndrome, OCD, and selective mutism—that basically means I only speak when I think it’s necessary.”

I have some experience with Asperger’s and these kids can obsess with a issue that captures their attention. She is, however, far from alone. The eco-Nazis have fomented a new affliction called “eco-anxiety”:

A growing number of children are being treated for “eco-anxiety” as concerns surrounding climate change and its effects continue to mount.

Climate change is real and its impact is being felt in communities across much of the US, according to a federally mandated report released last year. Among the many repercussions, human health and economic stability have seen declines as the environment suffers. Just this year, the Great Barrier Reef’s condition was downgraded to “very poor” as the Amazon rainforest burns, spreading associated carbon monoxide across the globe. Greta Thunberg, 16, successfully sailed to the US to bring awareness to the issue and school-age children across the country are gearing up to walk out of school in protest of inaction.

Amidst the headlines, an increasing number of anxiety and stress cases fueled by climate change are being recorded by specialists. Caroline Hickman of the Climate Psychology Alliance and Bath University recently spoke to The Telegraph of her experiences listening to children experiencing eco-anxiety, noting that some have even been treated with psychiatric drugs.

“A lot of parents are coming into therapy asking for help with the children and it has escalated a lot this summer,” she told The Telegraph.

“The symptoms are the same [as clinical anxiety], the feelings are the same, but the cause is different. The fear is of environmental doom – that we’re all going to die.”

And this from the Telegraph

Rising numbers of children are being treated for “eco-anxiety”, experts have said, as they warn parents against “terrifying” their youngsters with talk of climate catastrophe.

Protests by groups such as Extinction Rebellion, the recent fires in the Amazon and apocalyptic warnings by the teenage activist Greta Thunberg have prompted a “tsunami” of young people seeking help.

A group of psychologists working with the University of Bath says it is receiving a growing volume of enquiries from teachers, doctors and therapists unable to cope.

The Climate Psychology Alliance (CPA) told The Daily Telegraph some children complaining of eco-anxiety have even been given psychiatric drugs.

The body is campaigning for anxiety specifically caused by fear for the future of the planet to be recognised as a psychological phenomenon.

However, they do not want it classed as a mental illness because, unlike standard anxiety, the cause of the worry is “rational”.

Greta Thunberg is a warning beacon.  The eco-Nazis are scaring kids to death. Who knows how many children will require psychotropic medication consequent to the fears being drummed into them?

Then again, they’ve only got 12 years left.

Finally, let’s remember that Bernie continues to fly jets, obama bought an oceanfront house and the other day democrats held a part during which they cooked up 10,500 of those steaks they want you to forego.

They’re full of sh*t. All of them.

Related- and don’t miss this: