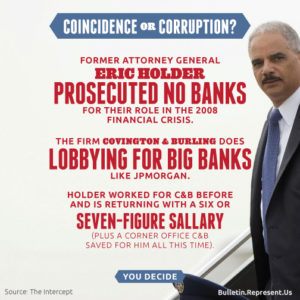 The democrat party has swung so far to the left such that in contrast “my people” Eric Holder appears to be a moderate. Holder is no stranger to controversy:

Pretty much all 2020 dems want to do away with ICE and destroy the country by decriminalizing illegal border crossing and eliminating borders.

Recently Holder said that that might not be a good idea:

Former Attorney General Eric Holder is defending the Obama administration against criticism from the left about its deportation efforts while warning Democratic presidential hopefuls that the U.S. needs borders.

“The emphasis there was on people who had criminal records, people who posed a danger, a public safety risk,” Holder, who served under former President Obama, said of the previous administration’s policy in a CNN interview released Saturday.

“Democrats have to understand that … borders mean something,” he added.

Holder expressed disagreement with a proposal embraced by some Democratic presidential candidates to make illegally entering the U.S. a civil offense rather than a criminal offense.

“It might send the wrong signal. But it would certainly take a tool away from the Justice Department that it might to use,” Holder added.

People need to remember how many illegal obama deported

Axios reported that U.S. Immigration and Customs Enforcement (ICE) deportations were above 385,000 annually during fiscal 2009 through fiscal 2011 and reached 409,849 in fiscal 2012. The numbers dropped in the later years of the Obama administration.

And that’s not all.

“I think there is a potential cost to the nation by putting on trial a former president,” said former Attorney General Eric Holder in an interview with CNN political commentator David Axelrod.

Holder said that he was convinced that Trump would be prosecuted when leaving the office at the end of his term.

“We already have an indictment in the Southern District of New York where [former Trump attorney] Michael Cohen — relative to the payoffs, Michael Cohen’s already in jail with regard to his role there,” Holder explained.

“Individual-1 is the president,” said Holder, referring to a sobriquet used in court documents to indicate Trump’s name, “and it would seem to me that the next attorney general, the next president, is going to have to make a determination.”

When Axelrod asked about the potential effect of putting Trump on trial, Holder said that he thought “there is a potential cost to the nation by putting on trial a former president, and that ought to at least be a part of the calculus that goes into the determination that has to be made by the next attorney general.”

Barack Obama could perhaps be prosecuted for depraved indifference in the Parkland murders. His PROMISE Act is directly responsible for the death of Meadow Pollack and 16 others.

After my daughter, Meadow, was murdered in the February 2018 school shooting in Parkland, Florida, I wanted every answer. As I investigated, I realized that it was the most avoidable mass murder in American history. And I learned something else that keeps me up at night: The policies that made this massacre inevitable have spread to schools across America.

A few weeks after the massacre, I asked whether the Broward school district’s disciplinary leniency policies enabled the shooter to slip through the cracks. Broward Superintendent Robert Runcie called questions like mine “fake news” because, he said, the shooter had never been referred to the school district’s PROMISE diversionary program “while in high school.” The program allows students who commit certain misdemeanors to avoid getting involved with the criminal justice system.

Later, the news broke that he had been referred to PROMISE while in middle school. But the superintendent’s carefully crafted denial obscured the unmistakable fact that the school district’s failure to properly handle the shooter happened by design.

Now do I really think that would happen?

No, but I also think the threats to prosecute Donald Trump after his term in office are entirely asinine and motivated by hatred and not justice.

Prosecution is being substituted for elections.

That’s wrong. It is born out of democrat desperation and they now are hell bent on tearing asunder the fabric of the nation to deter Trump form being reelected and have a collection of radical left wing miscreants all trying to outdo one another with regard to undermining everything it means to be an American.

It says America is in peril.

No, but I also think the threats to prosecute Donald Trump after his term in office are entirely asinine and motivated by hatred and not justice.

The left has turned investigation and prosecution into political weapons. They don’t really consider factual necessity a requirement; they have enough support and influence throughout the DOJ and judicial system that they can investigate and prosecute at will. Success is not winning or proving guilt; it is utilizing the fact of an investigation or indictment as an implication of guilt.

Of COURSE Trump will be indicted after his term. The left will need to prove they’ve been right all along. Like the Mueller “investigation”, much will be made of any trial and, when they lose, it will be quickly swept under the rug. But, they were “right” for a little while, just like when they “had” a “mountain” of evidence “proving” Trump’s “guilt”.

Warden Shirley Skipper-Scott Sued Eric Holder for Racism – Then Got Promoted to NY City’s MCC Where Epstein Died AFTER he said he would name names, these people are sick.Watch this womans future career.