AOC is responsible for the Dayton mass shooting 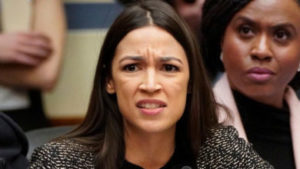 That could be the motto of the left. They leap to make drunken and false accusations long before the sobriety of facts settles in.

There have been two horrific shootings in the last couple of days. Donald Trump has been blamed for both but that doesn’t hold water. The Dayton shooter was a leftist and Alexandria Ocasio Cortez is clearly responsible for the Dayton shooting.   Heavy.com:

Connor Betts, the Dayton, Ohio mass shooter, was a self-described “leftist,” who wrote that he would happily vote for Democrat Elizabeth Warren, praised Satan, was upset about the 2016 presidential election results, and added, “I want socialism, and i’ll not wait for the idiots to finally come round to understanding.”

Betts’ Twitter profile read, “he/him / anime fan / metalhead / leftist / i’m going to hell and i’m not coming back.” One tweet on his page read, “Off to Midnight Mass. At least the songs are good. #athiestsonchristmas.” The page handle? I am the spookster. On one selfie, he included the hashtags, “#selfie4satan #HailSatan @SatanTweeting.” On the date of Republican Sen. John McCain’s death, he wrote, “F*ck John McCain.”

AOC has been pushing socialism from the moment she took office. Recently she suggested that violence might be mandatory in the US

She is also responsible for the attack on the Colorado ICE facility. She inspired Van Spronsen with her relentless attacks on ICE.

AOC has been described as a “firebrand.” She has been breathing fire and aiming that fire at the right and she has finally broken through. She needs to be held accountable for the Dayton massacre.

See how this works?

[…] AOC is responsible for the Dayton mass shooting […]

While two can play at this game, the fact is our media is so skewed Leftward that the vast public never even know how often Obama incited violence or how fiercely AOC justified violent insurrection.
All they hear is “Trump this, Trump that.”
Is discourse dead because those on the Left prefer to have violent tantrums, knowing they have the losing side in any debate?

There have been two horrific shootings in the last couple of days.

12 killed and 66 wounded in Chicago, but that’s just another weekend there. No liberal demands for solutions there; they realize THEY are the problem.

See how this works?

It also works to promote a RESPONSE, as we saw in El. Paso. Many are infuriated by the left wing rhetoric, blaming others for the problems they cause though, thankfully, few resort to violence (except on the left, where violence is acceptable). However, the El Paso shooting can be attributed to a person, unstable, nurtured on violent video games, is pushed over the edge by having illegal immigration crammed down his throat.

One thing is absolutely clear: while the El Paso shooting is getting maximum coverage from the left, Dayton is hardly mention but as “another” shooting and, of course, Chicago is not even mentioned. The left only cares about the USEFUL tragedies.

[…] blog of the day is Flopping Aces, with a post noting that AOC is responsible for the Dayton […]

He is no Conservative but Liberals and the M.S. Media will make us think he is a Conservative look at how they treat just about all mass shootings they blame the Gun Lobby like the NRA Hogg and his stupid March for our Lives did

so USA is gun city when are all these concealed carriers going to start shooting back ?
seriously the “active shooter” b.s. will cease if people start shooting them
note – this period has already happened in USA history, see the wild west

[…] has been going on since before the Era Of Trump. Heck, according to Liberal World, we should be blaming AOC for Dayton, right? […]

evita and her bf are now on federal welfare. so how much does the millennium bf get paid working in her office?? a side note is that AR 15 platforms does not kill-it is the ballistics of the 5.56. the men who developed the AR platform was Eugene Stoner, Robert Fremont, and L. James Sullivan. most of you readers never heard of these men. a 50 grain 5.56 leaves the barrel at a little over 3100 fps with an energy of 1750 foot lbs. the destructive power is awesome between 50-100 years or in most cases less. the radicalized gay muslin terrorist barracknut is gone and what one would call a legacy is vanishing

[…] in the border-security debate last month by Rep. Alexandria Ocasio-Cortez of New York.” Seems AOC, Liz Warren and democrats in general use “hate speech” to incite violence, not Trump.  As for […]