This is how socialism really works 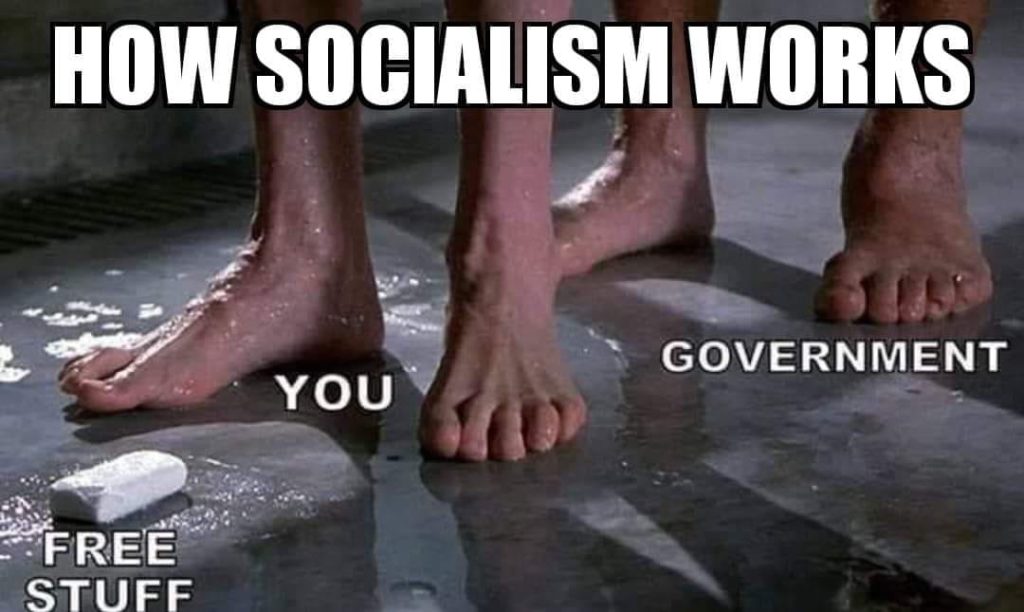 Alexandria Ocasio-Cortez is a know-it-all ditz. The founder of Greenpeace has called her a “pompous little twit.”

@AOC
Pompous little twit. You don’t have a plan to grow food for 8 billion people without fossil fuels, or get food into the cities. Horses? If fossil fuels were banned every tree in the world would be cut down for fuel for cooking and heating. You would bring about mass death.

While she is amusing, she is also a media darling That makes her dangerous as she is accorded far more press coverage than is warranted. Still, her utterances are both a source of hilarity and a warning. AOC has spent her Congressional tenure bashing America and endorsing socialism. While do so, she exposes her own galactic hypocrisy and demonstrates how socialism and socialist leaders really roll.

Her “Green New Deal” would do away with all fossil fuels and jet aircraft, but that doesn’t stop her from using a gas guzzler when she desires:

But the woman who boasts of a “razor-sharp BS detector” seems to have trouble sniffing out her own.

Since declaring her candidacy in May 2017, Ocasio-Cortez’s campaign heavily relied on those combustion-engine cars — even though a subway station was just 138 feet from her Elmhurst campaign office.

She listed 1,049 transactions for Uber, Lyft, Juno and other car services, federal filings show. The campaign had 505 Uber expenses alone.

In all, Ocasio-Cortez spent $29,365.70 on those emissions-spewing vehicles, along with car and van rentals — even though her Queens HQ was a one-minute walk to the 7 train.

Her explanation? “I’m just living in the world.”

“I also fly and use AC,” the Green New Deal-touting pol tweeted Saturday night. “Living in the world as it is isn’t an argument against working towards a better future.”

Part her Green New Deal is the demand that Americans stop eating “farting cows” but her chief of staff was caught happily downing a burger.

Hi AOC, why is your Chief of Staff eating a hamburger? smh pic.twitter.com/sJanAC1Oz2

She took great exception to this. Not him eating the farting cow, but someone actually catching him eating it. 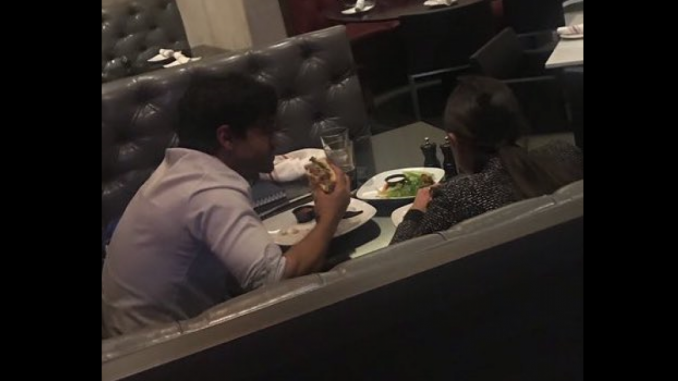 She responded with the hypocrite’s favorite defense- outrage

Tonight a dude was creepily (and obviously) taking a picture of me while pretending he wasn’t and I had to break his imaginary fourth wall and say “Hi! I’m a person! This is weird!” https://t.co/JnybvVubVh

She feels America is “garbage” and asserts that capitalism is “irredeemable”

“To me, capitalism is irredeemable,” she added, arguing that capitalism’s goals come at a cost to people and the environment, Bloomberg reported.

The congresswoman, who has described herself as a democratic socialist, added during her interview that “we should be scared.”

AOC has had three ethics complaints filed against her.

The Coolidge Reagan Foundation, a nonprofit, filed an ethics complaint last week alleging that Ocasio-Cortez had used House resources for personal means when she allowed her boyfriend to obtain a House.gov email address. The complaint also alleged that she obtained the email address by falsely listing him as a staff member.

Just a few days earlier, the National Legal and Policy Center had filed a complaint with the FEC alleging an incestuous relationship between Ocasio-Cortez’s campaign and Justice Democrats — a PAC which was at the time controlled by the congresswoman and her chief of staff, Saikat Chakrabarti — in addition to possible campaign finance violations.

A third complaint was filed by The Foundation for Accountability and Civic Trust, which alleged that Ocasio-Cortez’s social media use may violate House ethics rules. At issue is her use of a political Instagram account — which contains direct links to her House Instagram account and includes a link for political contributions — includes posts of official video footage from the House floor.

Her Chief of Staff funneled a million dollars from her campaign into a two of his own companies:

Two political action committees founded by Rep. Alexandria Ocasio-Cortez’s top aide funneled over $1 million in political donations into two of his own private companies, according to a complaint filed with the Federal Election Commission on Monday.

The cash transfers from the PACs — overseen by Saikat Chakrabarti, the freshman socialist Democrat’s chief of staff — run counter to her pledges to increase transparency and reduce the influence of “dark money” in politics.

Chakrabarti’s companies appear to have been set up for the sole purpose of obscuring how the political donations were used.

The arrangement skirted reporting requirements and may have violated the $5,000 limit on contributions from federal PACs to candidates, according to the complaint filed by the National Legal and Policy Center, a government watchdog group.

Campaign finance attorneys described the arrangement as “really weird” and an indication “there’s something amiss.” They said there was no way of telling where the political donations went — meaning they could have been pocketed or used by the company to pay for off-the-books campaign operations.

The networks have had zero interest in this. Speaking of dodging, AOC created the ruse that she would cap her employees’ income at $80,000 in the interest of fairness. The real reason for that was to allow her staff to avoid transparency:

Rep. Alexandria Ocasio-Cortez’ decision to cap her office salaries at $80,000 will let her chief of staff and senior employees avoid public transparency laws that would require them to reveal outside income, gifts, and stock trading activity.

The New York Democrat announced last week that she would institute “living wage” rules in her office, paying staff members a minimum of $52,000 a year and a maximum of $80,000 a year.

Under federal law, congressional employees who earn more than $126,000 a year — which includes most chiefs of staff — must submit public financial disclosure forms that detail outside income they earn, stock investments, debt, and gifts or paid trips that they are given by outside sources.

Ocasio-Cortez chief of staff Saikat Chakrabarti, a Silicon Valley entrepreneur, would be shielded from the public disclosure laws that apply to the vast majority of chiefs of staff in Congress.

The National Legal and Policy Center, a government watchdog group, said the $80,000 salary cap for Ocasio-Cortez’ senior staffers was concerning because it could be used to intentionally evade financial disclosure laws.

That sounds pretty capitalist to me.

Despite her not having even been born at the time, she knows all about Ronald Reagan:

AOC has made abundantly clear that she is not willing to live up to the ideals she espouses, just as the socialist leaders of the past have failed to do:

Hugo Chavez brought socialism to Venezuela and once said that it is “bad” to be rich. Yet his family lived in opulence even as the rest of the country has in recent years descended into starvation and violence.

Chavez, despite not being wealthy when he was democratically elected as president of Venezuela in 1998, was worth between $1 billion and $2 billion at his death, according to global risk analysis firm Criminal Justice International Associates.

Hugo Chavez brought socialism to Venezuela and once said that it is “bad” to be rich. Yet his family lived in opulence even as the rest of the country has in recent years descended into starvation and violence.

Chavez, despite not being wealthy when he was democratically elected as president of Venezuela in 1998, was worth between $1 billion and $2 billion at his death, according to global risk analysis firm Criminal Justice International Associates.

The top leader of the Union of Soviet Socialist Republics had access to a network of palaces, cars and delicacies. However, Soviet leaders lived up to their ideals in one way: they never officially owned any of it. Upon death, the things they used went to the next leader.

Soviet leaders and bureaucrats also had their own elite, exclusive system of grocery stores, hospitals and schools — even while ordinary Russian citizens sometimes waited for hours to buy food.
China

China’s constitution states that it “is a socialist state under the people’s democratic dictatorship led by the working class” – yet, its leaders live far better than workers.

China suffered more deaths than any other country due to starvation caused by the government takeover of farms. Sixty-five million people were killed, per The Black Book of Communism.

“The leaders never intended for themselves to be the ones who were tightening their belts,” Marion Smith, executive director of the Victims of Communism Memorial Foundation, told Fox News.

“Mao [Zedong] is a great example. He had a rotating harem of underage girls,” Smith said. That is per Mao’s former personal physician, who later moved to America.

“Mao was sitting in his luxurious pool, talking to Western journalists, while millions of Chinese died of starvation,” Smith added.

To the visionary pantheon of  Chavez, Castro, Stalin and Mao we can add Ocasio-Cortez. She’s a hypocrite now. One can only imagine the horror she’d visit on this country given the opportunity. In Orwell’s Animal Farm, Ocasio-Cortez would be the most equal of the animals.

Of course, that would have to be after she paid the outstanding corporate tax bill she still owes New York City.

Democratic socialism. This is how it really rolls.