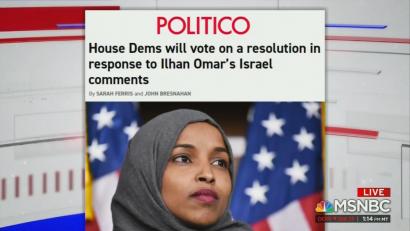 It has begun. It will not be long before DNC meetings begin with the Islamic call to prayer.

Let that soak in for a second.

During her show on MSNBC Thursday, Ruhle marveled at how condemning bigotry had become difficult for the left. “This puts Nancy Pelosi in a tough spot,” Ruhle said. “What was expected to be a simple vote has exposed a deep rift within the party.”

Ruhle lamented the party’s inability to directly confront anti-Semitism. “Why?” she asked. “Why would coming down hard on anti-Semitic speech alienate progressive groups?”

Her guests were at a loss to explain why a progressive movement anchored in “tolerance” and “inclusion” was struggling to identify and denounce anti-Jewish bigotry.

“It shouldn’t,” Reines said. “What she said was anti-Semitic. As a Jew who’s a Democrat, this drives me crazy.”

Omar, a member of the Progressive Caucus, has drawn scrutiny and condemnation since taking office in January for a series of anti-Semitic remarks.

The DNC has made itself the party of antisemitism.

Pelosi started off wrong: Facing calls to pull Omar from the House Foreign Affairs Committee after the Minnesota freshman’s third set of bigoted public remarks in just two months, the speaker instead went for a House resolution condemning anti-Semitism but not Omar herself.

Yet even that turned out to be too much for Pelosi’s members. Days of watering the message down turned the resolution into seven pages of meaningless disapproval of all kinds of nastiness against every imaginable group. That pablum passed 407-23 — with Omar herself happily voting “aye.”

Message: Democrats hate hate — but when it comes to a hater in their own midst, they’ll make excuses or even elevate the bigot.

Because Democratic leaders publicly bent over backward to excuse Omar’s continued use of classic anti-Jewish tropes. Pelosi claimed she “doesn’t believe” that Omar’s comments were “intended in any anti-Semitic way,” and that the resolution is “not about her.” No. 2 House Democrat Steny Hoyer also insisted Omar isn’t anti-Semitic.

And, in the most bizarre and offensive defense, No. 3 Jim Clyburn claimed Omar’s own experience as a Somali refugee means bigotry is “more personal” to her than to the children of Holocaust survivors.

Then Pelosi made things even worse with her pathetic defense of Omar, saying she doesn’t “understand” her words. Pelosi:

The incident that happened with — I don’t think our colleague is anti-Semitic. I think she has a different experience in the use of words, doesn’t understand that some of them are fraught with meaning, that she didn’t realize. But nonetheless that we had to address. And so the question was, do you have one amendment that just talks about anti-Semitism — I mean resolution, or one that addresses white supremacy, white — so many of the — Islamophobia all the rest of it.

Omar has been in this country for two decades. She damn well understands.

There are a few more words that Omar doesn’t understand: “tact”, “restraint” and “Constitution.”

Now totally uninhibited, Omar has gone on to imply that Obama is a murderer:

Minnesota Rep. Ilhan Omar ripped former President Barack Obama in an interview published Friday, belittling his “pretty face” and saying his agenda of hope and change was an illusion.

“We can’t be only upset with Trump,” the freshman firebrand told Politico Magazine.

“His policies are bad, but many of the people who came before him also had really bad policies. They just were more polished than he was,” Omar said.

“And that’s not what we should be looking for anymore. We don’t want anybody to get away with murder because they are polished. We want to recognize the actual policies that are behind the pretty face and the smile.”

democrats have a major problem on their hands. Omar is poison. The problem is, Pelosi has made Omar untouchable within the party, which has a battle ongoing within it.

They are now officially the antisemitic party.