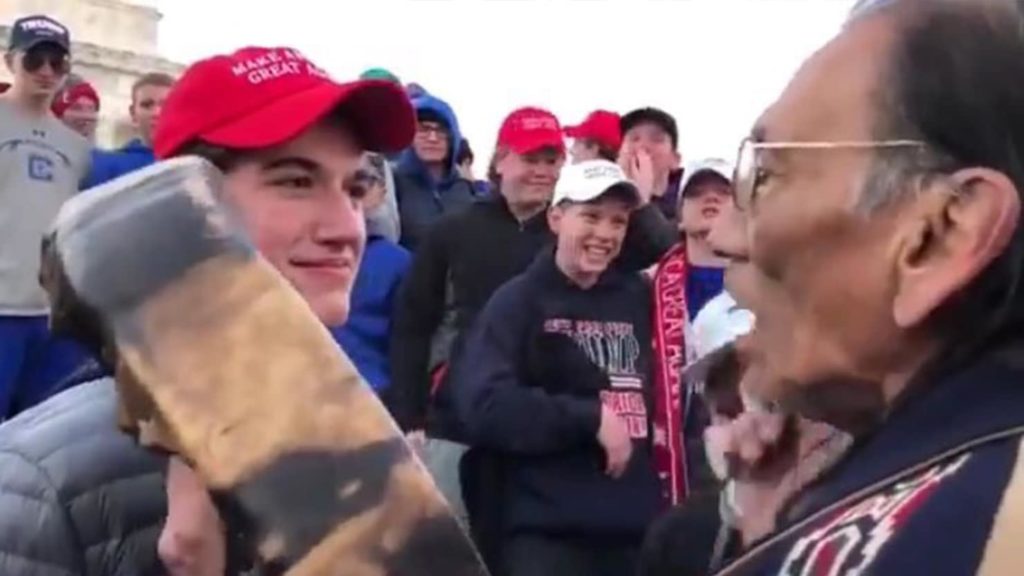 This story is simply astonishing. The wrong visited on the kids involved is disgusting. This is the future of the liberal media- destroy you and pile on before the facts come out even if you’re a kid. BuzzFeed does it again:

A Kentucky Catholic school may take disciplinary action against their students after a group of the MAGA hat–wearing teenage boys taunted a Native American elder at the Indigenous Peoples March in Washington, DC, on Friday.

Several viral videos show the young men, nearly all of whom are white and wearing pro-Trump gear, chanting at and mocking the man on the steps of the Lincoln Memorial.

One of the teens can be seen standing face-to-face with the elder, smirking and saying nothing, while the man sings and beats a drum.

The indigenous protester was identified by Indian Country Today as Nathan Phillips, a member of the Omaha Nation and a Vietnam War veteran. He reportedly hosts a ceremony each year honoring Native American veterans at Arlington National Cemetery and is also the keeper of a sacred pipe.

The NY Times jumps in

They were Catholic high school students who came to Washington on a field trip to rally at the March for Life.

He was a Native American veteran of the Vietnam War who was there to raise awareness at the Indigenous Peoples March. https://t.co/W2UrvWggx9

Maggie the Hack Haberman piles on without bothering to vet the story:

There are dozens of students laughing and egging on the behavior. Will be interesting to see if anyone is actually expelled, as officials suggest is possible https://t.co/l7kjDOxiS7

There’s a problem. It’s a complete lie. A despicable lie. Watch as Phillips approaches and harasses the kids

This unedited video (with the original sound) is indisputable proof that the Native American man approached the Catholic school kids pic.twitter.com/cFi0qRYDg2

Phillips told the Washington Post Saturday that he had been singing an American Indian Movement song that serves as a ceremony to send the spirits home when he noticed that tensions started to escalate.

“It was getting ugly, and I was thinking: ‘I’ve got to find myself an exit out of this situation and finish my song at the Lincoln Memorial,’” Phillips told the paper. But after one of the teens wearing a MAGA hat stood in his way, he said, he continued to drum and sing.

“I felt like the spirit was talking through me,” Phillips said.

This is bullsh*t. The video clearly shows that Phillips was the aggressor and went after the kids. Seen on Twitter:

Here is a letter written by one of the kids

Response from Cov Cath student who says he was present at the event in question in Washington.@Local12 pic.twitter.com/nqLD1pJY2u

Here is a longer video

And here is a 2 hour video

We now have a 2 hour raw recording of the MAGA kids incident. We can see: No chanting "build the wall", Native group approaches about an hour after the kids were already there, "Black Activists" are yelling Fa**ot https://t.co/Af71rJkaqd

Want to see the real bigots? They are the Black Hebrew Israelites

I feel so bad for these kids that are being doxxed. The media is ruining their lives in order to further their own narrative, it's disgusting. The real bigots were harassing them, throwing racist insults and telling white ppl to go back to Europe. The left is unhinged.

And yes, the kids are being doxxed. High school kids. Kids who have done nothing wrong. Nathan Phillips antagonized those kids. He got in their faces and tried to intimidate them. He put that drum in their faces.

Then he lied about it. Oh, by the way

Phillips has a history.

These kids are guilty of nothing more than wearing MAGA hats.

You’d think that the liberal media, coming right off the Cohen embarrassment, would actually vet a story before condemning anyone, let alone some innocent kids.

You’d be wrong. They wanted this story to be true.

What we are seeing is the future of the left wing media. It will be singling out Trump supporters and attempt to destroy them, facts be damned. You might wonder why the media failed to report the harassment of the kids by the Black Hebrew Israelites, who were calling the kids “faggots.”

I don’t. The liberal media is disgusting.