See how overt and extreme the NY Times bias has become 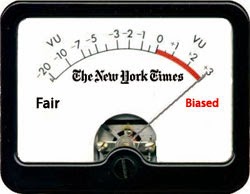 This is this morning’s NY Times paper. Right there, at the top of fold is this title:

“A FERVENT TRUMP BACKER IS SEIZED IN PIPE BOMB SPREE”

But hey, remember when Steve Scalise was shot by a “fervent” Bernie Sanders supporter? Did we see the headline

This was the headline instead

Check out this sentence from the above article:

Mr. Hodgkinson seemed to be a fervent opponent of Mr. Trump.

Then about 22 paragraphs in

Mr. Hodgkinson also appeared to have been a fervent fan of Senator Bernie Sanders,

Fervent seems to be a favorite adjective in the NY Times guide book.

The bias is painful and overt. I remember when we not allowed to blame Sanders for the Scalise shooting, but here the Times manages to tar Trump with the bomber’s efforts. And that bomber appears to be a complete lunatic.

But take heart, this is how you get more Trump.