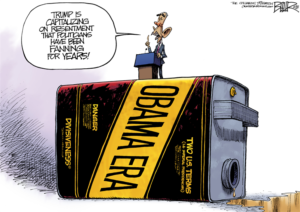 Welcome back everybody! Let’s get straight to the crazy:

I say we nuke the entire university system. Blow it up from orbit. It’s the only way to be sure.

Bill Whittle had the best remark on Kerry: “I’d like to buy his book just to throw it over The White House fence”

9/16 – Shirtless man stares down Hurricane Florence with American flag in hand: ‘Just being free and American’

Apologies for the auto-launch video. Watch the second video embedded in the post. It’s only nine seconds and it’s what made this guy famous and just screams ” ‘Murica, baby!”

I saw The Dregs of Humanity open for Basket of Deplorables back in ’83!

Joking aside, one of my favorite things about the Trump Presidency has been how comfortable The Radical Left has become in expressing how much they loathe half of this country.

We can’t have honesty and name the action being practiced?
No problem – If NPR is going to try whitewashing this then the producers should troll these Fascists by referring to Gosnell as a “Reproductive Freedom Practitioner”

9/18 – Political Posters by Shepard Fairey and Others Are Coming to 20,000 US Classrooms

Another interesting piece from from the entertaining lefty Observer Arts newsletter. This should get the attention of anyone with kids in the school system, especially when you see that The Radical Left isn’t even trying to hide the agenda that they want to cram down our kids’ throats. On the plus side, neither the article nor an online search could find any of these schools that are supposedly adopting this curriculum, but damn we need to be vigilant.

This is a great ongoing series where Steven Crowder (politely) gets in the faces of the Left Wing extremists who slander him personally or call for violence against him. Our side needs to do more of this. I’m sure that Bill Kristol and David French are horrified at such tactics.

As always, Democrats make a point of reminding us that if you want fiscal responsibility, there’s always an even dumber alternative than Republicans!

And from the archives, I have for you a particularly timely story as Barack Obama tries to take credit for the trump economy. We continue the Economics for Politicians series with Chapter 4: You Don’t Create Jobs – It’s Time to Get Over FDR!

If you’re wondering why there wasn’t anything above on Kavanaugh, Feinstein, etc, it has to do with the process of how I write these weekly roundups. I start these over the weekend with a few links, generally from Pirate’s Cove, pull in whatever images i want to use and plug in the end code for my external links.

On Wednesdays I grab my Monday-Wednesday stories, along with whatever Tweets I want to include in the roundup at the end. After I’ve updated the draft in Brother Bob’s Blog, I copy everything over into Flopping Aces. On Thursday I add one story from that day, and then on Friday I only have one new entry to add & copy both into FA, ready to publish 1st thing Saturday morning. I do this in case I have a busy week so I don’t have to scramble to get a post up or end up having to rush something I’m not happy with over a busy weekend. How does this relate to Kavanaugh? If you’ve been following the story you’ve noticed that The Radical Left has changed their story so many times over the week that by the time Saturday rolls around whatever I might have included would be old news. Not that you were wondering, but there’s some insight as to how the sausage gets made.

“Lying, lawlessness is a threat to national unity with its corruption,” said the woman who claimed she didn’t email any classified material, was extremely careless with national security, then called 1/4 of America beyond redemption while she took bribes to her shady slush fund https://t.co/zffdGHINPL

The larger lesson of the past 2 yrs is the left will not abide losing power, even temporarily. For liberals, political power is personal power. W/out it, they’re exposed & terrified. Some become vicious. They believe they’re meant to run this country, our government & our culture

So what’s the moral here? Don’t bring sex assault concerns to Senator Feinstein because she’ll sit on it for months until she can use it politically

"WE WANT THE TRUTH (BUT ONLY AFTER THE MIDTERMS)!" — Democrats.

Meanwhile, at MSNBC, Todd has an awful, disgusting, racist, anti-Semitic colleague with a tv show–@TheRevAl!#DoubleStandard pic.twitter.com/bYPk0NlIdJ

The people who want Franken back, want Kavanaugh gone

kerry did violate the Logan Act, but what do you expect from a cockhole drunk. he was hung over at his confirmation hearings

This one goes out to Sen Feinstein who outs her friends a few seconds after the last minute.

Ok a new level of how liberals ruin everything they touch, I scream you scream we all scream about icecream.

When I see examples like this of “students” exercising their stupid muscles, I try to imagine them in a real workplace, where budgets are limited and people are expected to get a specific job done within a specific time and budget. We are in DEEP SH!T. How about NO ice cream?

Well, in his defense, he was FOR criticizing people for violating the Logan Act before he was AGAINST it.

9/16 – Shirtless man stares down Hurricane Florence with American flag in hand: ‘Just being free and American’

It would be sweet to have seen someone kneeling and blown and washed away.

This is what happens when you read Hillary’s books and believe them; you do the same stupid things.

Kind of like investigating terrorism and terrorists but being forbidden from paying attention to the most prevalent source of terror and terrorists on the planet.

9/18 – Political Posters by Shepard Fairey and Others Are Coming to 20,000 US Classrooms

I don’t have kids in school, but I have grandkids and I will definitely be watching. Propagandizing our children is about the most despicable thing the government can do, especially in light of the kind of opinions they BAN.

I went to UTA… (I threw up in my mouth a little). I wish everyone that uses a captive, subservient audience to promote a political agenda could be aggressively confronted like this. Hopefully, some of his “logical” students will research both sides of this issue and draw the appropriate conclusions.

“Beto” (look up the definition of “beto” in the urban dictionary, just for fun) is pulling out all the far left, radical, race-baiting stops. The gap has been widening, in favor of Cruz, lately though.

Well, before the economy could fully recover, first Obama had to drive it to rock bottom. So, maybe he is correct.

It is humorous (in a sickening, hypocritical way) that liberals today are bemoaning deficits of any size, yet they and they alone stand in the way of spending cuts and responsible spending. Sure, Republicans don’t show much restraint in the face of a spending competition with Democrats, but they would be able to implement fiscal responsibility. A balanced budget amendment would take all hypocrisy out of the formula.

Wow… I saw the infancy of AJ… and he hasn’t matured much since then.