Why the f**k should Trump trust the assessment of the IC heads who wanted to take him down? Give me a reason 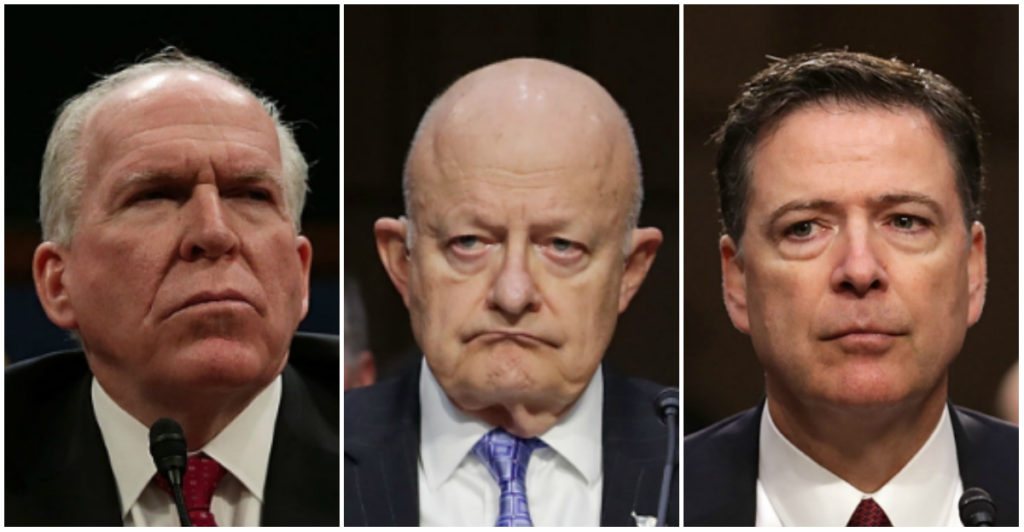 There is much hand-wringing and consternation over the Trump-Putin presser. No response was more over the top than that of John Brennan:

Donald Trump’s press conference performance in Helsinki rises to & exceeds the threshold of “high crimes & misdemeanors.” It was nothing short of treasonous. Not only were Trump’s comments imbecilic, he is wholly in the pocket of Putin. Republican Patriots: Where are you???

But who has seen the proof? Have you?

We were told over and over that 17 agencies agreed on the assessment. That was a lie.

Former Director of National Intelligence James Clapper does not know what caused the now-debunked claim that all 17 intelligence agencies backed an assessment that Russia interfered in the 2016 presidential election to spread.

Clapper discussed the matter on CNN on Thursday evening, prompted by comments earlier in the day from President Donald Trump.

While in Warsaw, Poland for the G-20 summit, Trump was asked about the intelligence community’s assessment that Russia interfered in the election and his doubts about Moscow’s role. Trump challenged the popular “17 agencies” figure, pointing out that it had been shown to be false.

On what evidence was the assessment made? The FBI was never allowed to examine the DNC servers.

The Democratic National Committee “rebuffed” a request from the FBI to examine its computer services after it was allegedly hacked by Russia during the 2016 election, a senior law enforcement official told CNN Thursday.

“The FBI repeatedly stressed to DNC officials the necessity of obtaining direct access to servers and data, only to be rebuffed until well after the initial compromise had been mitigated,” a senior law enforcement official told CNN. “This left the FBI no choice but to rely upon a third party for information. These actions caused significant delays and inhibited the FBI from addressing the intrusion earlier.”

Later, the DNC would claim that the FBI never requested access to the servers.

“The DNC had several meetings with representatives of the FBI’s Cyber Division and its Washington Field Office, the Department of Justice’s National Security Division, and US Attorney’s Offices, and it responded to a variety of requests for cooperation, but the FBI never requested access to the DNC’s computer servers,” Eric Walker, the DNC’s deputy communications director, told BuzzFeed News.

Today saw some media hacks trying to rewrite the story:

So who is everyone depending on for the Russian connection?

Crowdstrike has a credibility problem:

WASHINGTON — An influential British think tank and Ukraine’s military are disputing a report that the U.S. cybersecurity firm CrowdStrike has used to buttress its claims of Russian hacking in the presidential election.

The CrowdStrike report, released in December, asserted that Russians hacked into a Ukrainian artillery app, resulting in heavy losses of howitzers in Ukraine’s war with Russian-backed separatists.

But the International Institute for Strategic Studies (IISS) told VOA that CrowdStrike erroneously used IISS data as proof of the intrusion. IISS disavowed any connection to the CrowdStrike report. Ukraine’s Ministry of Defense also has claimed combat losses and hacking never happened.

A CrowdStrike spokesperson told VOA that it stands by its findings, which, they say, “have been confirmed by others in the cybersecurity community.”

The challenges to CrowdStrike’s credibility are significant because the firm was the first to link last year’s hacks of Democratic Party computers to Russian actors, and because CrowdStrike co-founder Dimiti Alperovitch has trumpeted its Ukraine report as more evidence of Russian election tampering.

The Crowdstrike report, titled “Use of Fancy Bear Android Malware in Tracking of Ukrainian Field Artillery Units“, was issued by the company on December 22, 2016. It’s a slickly produced document, with a frightening comic book-style cover and plenty of charts and graphs. Crowdstrike’s villain in the report is Fancy Bear, which they say is a hacking group controlled by Russia’s GRU intelligence agency. Crowdstrike itself gave the group the name Fancy Bear, with ‘Bear’ referring to Russia and ‘Fancy’ referring to the song Fancy by Iggy Izalea.

On June 15, 2016 Crowdstrike claimed that Fancy Bear was behind the DNC hacks in an article title Bears in the Midst: Intrusion into the Democratic National Committee. That post came the day after the Washington Post published an article claiming Russian government hackers penetrated DNC and stole opposition research on Trump, quoting Crowdstrike’s co-founder Dmitri Alperovitch, who is scheduled to testify Monday in front of the House Intel committee hearing. In that June WaPo article, Alperovitch seemed unsure on details but pinned the hack on Fancy Bear:

CrowdStrike is not sure how the hackers got in. The firm suspects they may have targeted DNC employees with “spearphishing” emails. These are communications that appear legitimate — often made to look like they came from a colleague or someone trusted — but that contain links or attachments that when clicked on deploy malicious software that enables a hacker to gain access to a computer. “But we don’t have hard evidence,” Alperovitch said. The two groups did not appear to be working together, Alperovitch said. Fancy Bear is believed to work for the GRU, or Russia’s military intelligence service, he said.

Let us repeat a relevant portion:

“But we don’t have hard evidence,”

Thus the only basis for the assessment may never have happened.

And, BTW, who was in charge when all this was allegedly going on?   Obama, Brennan, Clapper and Comey. And let’s not forget that it was the obama administration who issued a “stand down” order in response to alleged Russian cyber attacks.

Now why would they do that?

Here are some things we DO know

Mollie Hemingway reminds us of something obama said:

Obama on Putin meddling in our election: "He denies it. So the idea that somehow public shaming is gonna be effective, I think doesn't read the thought process in Russia very well.” https://t.co/9gexI6YLVW

Andy McCarthy points out that Rod Rosenstein screwed the pooch with the indictments of the Russians:

What there will be, though, is a new international order in which nation-states are encouraged to file criminal charges against each other’s officials for actions deemed to be provocative (or, more accurately, actions that can be exploited for domestic political purposes). Of all government officials in the world, American officials are the most active on the global stage — and that includes meddling in other countries’ elections. I doubt our diplomats, intelligence operatives, elected officials, and citizens will much like living in the world Robert Mueller and Rod Rosenstein have given us. If the idea was to give Vladimir Putin and his thug regime a new way to sabotage the United States, nice work.

All day I have watched the screeching anguish of liberals moaning that Trump does not side with the American intelligence community.

McCabe did the same

All US intelligence agencies were out to take Trump down. Someone tell me why, when every intel agency outside the NSA was out to get Trump that he should trust them and the assessment of a firm hired by the DNC? Why should he trust the assessment of those who created a fake dossier?

If not for Mike Rogers, they would have framed Trump long ago.

What Trump has done is throw done the gauntlet. You say it’s Russians?

Produce the servers and let the FBI examine them. CrowdStrike had “no hard evidence” and their findings weren’t solid.

The left is making some serious accusations. PROVE THEM, you gutless cowards.