Clapper begins to put space between himself and Brennan and Comey 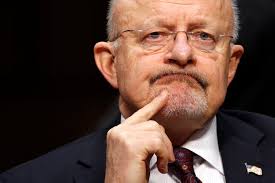 We were told ad nauseum that 17 agencies felt that the Russians attempted to interfere with US elections. In actuality it was three- the FBI, the CIA and the DNI.

That would be Comey, Brennan and Clapper.

All three are liars, but never mind that for a moment.

In July of 2017 Clapper made clear that the 17 number was baloney.

As the Russian hoax onion is peeled back many rear ends are in jeopardy and James Clapper, hearing the posse nearing, is now working to put distance between himself and Comey and especially Brennan.

“Did you know, Mr. Halper, the academic at Cambridge? [Halper] Do you know him at all,” Hewitt asked.

Halper, a Cambridge professor, reportedly worked as a source for the FBI and reported on the inner workings of the Trump campaign to the federal government. He also met with Papadopoulos in London while Papadopoulos was serving as a foreign policy adviser to the campaign, in an apparent attempt to extract more information.

Now he throws Samantha Power under the bus. She has never quite explained why she was unmasking Americans to spy on them on a regular basis:

It was revealed in October that Power made 260 unmasking requests during her final year in office, a rate that far surpassed her previous rate of unmaskings.

Power told the House Permanent Select Committee on Intelligence in an interview in October that others in government made the unmasking requests under her name.

Asked about Power’s explanation by Hewitt, Clapper suggested that it is cause for concern.

“If that happened, if people usurped the authority to request unmaskings, would that concern you, Director Clapper?” Hewitt asked.

“Yeah, it would,” said Clapper.

“I don’t know quite how that would happen, you know, because the only way you can make an unmasking request is that you have authorized access to the report in question in the first place.”

“So I don’t know how that, quite how that would work,” he added.

Clapper’s interviews are helping to clarify events. Brennan was the head of the CIA. Stefan Halper, who fed George Papadopoulos propaganda about hillary clinton to ensnare poor George, was a CIA asset.

We also know now that the FBI began spying on Michael Flynn in 2015:

The Senate on Monday released 500 pages of documents, including text messages between demoted counterintelligence agent Peter Strzok and his paramour, former FBI lawyer Lisa Page.  One of the formerly redacted texts suggests that the FBI may have been snooping into the Trump campaign way earlier than previously believed. Without mentioning any campaign specifically, the December 2015 text message refers to “oconus lures,” which is FBI lingo for spies outside the continental United States.  Strzok was leading the Clinton investigation at the time and would go on to play a central role in the Trump/Russia probe. It is being assumed that the pair was referring to the FBI’s efforts to bait & hook unsuspecting Trump campaign officials overseas.

Not long after hillary clinton and Terry McAuliffe made an investment in Andrew McCabe.

We also know now that the CIA began using an informant against Trump before there was a predicate investigation, which was started on July 31, 2016. And that’s in violation of FBI guidelines.

Kevin Brock agrees that Congress has legitimate questions. The retired FBI assistant director for intelligence supervised the rewriting of bureau rules governing sources, under then-director Robert Mueller a decade ago. Those rules forbid the FBI from directing a human source to target an American until a formally predicated investigative file is opened.

If Clapper is to be believed (and that’s no lead pipe cinch), then it comes down to Comey (and/or McCabe) and Brennan who orchestrated the Russian hoax against Trump and his campaign. It would be hard to imagine that McCabe could engineer such a thing on his own.

It’s time to haul Brennan’s ass before a grand jury. And then Comey.

They never thought they’d have to account for these actions.

Then again, Trump was never supposed to win.