“I am happy that my son is a martyr” 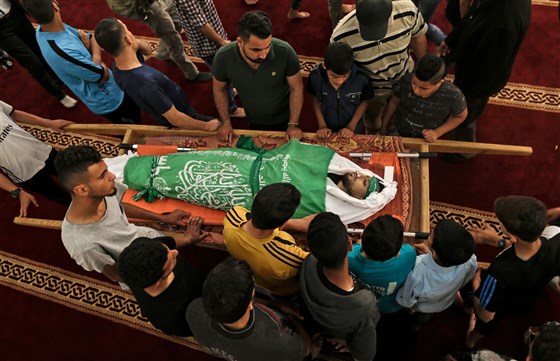 Yazan Tubasi was one of the Palestinians killed in the newest Gaza rioting. His father is happy that his son is a martyr. That, in a nutshell, is what’s wrong with Palestinians.

Numerous media outlets have referred to what happened in Gaza as a “protest”, but it was not a protest. It was a riot. It was violence planned by Hamas.

The media coverage of terror group Hamas’ deliberately-crafted border assault on Israel has been egregious: from CNN to MSNBC to The New York Times, mainstream outlets have acted as propaganda vehicles for one of the worst regimes on the planet. Hamas has spent weeks ginning up attacks on the border with the Gaza Strip — an area completely controlled by Hamas, which was elected to power in 2006 after Israel’s withdrawal from the area — and yet the media treat Israel as the aggressor.

More proof at the link. If that’s not enough

Palestinians set fires at the border And they were armed with guns, although the media glossed over it:

“You saw tens of thousands of young people crossing fields between the urban part of Gaza and the Israeli border, essentially trying to walk across this heavily militarized border unarmed,” Bradley said.

Then, without skipping a beat, he said the demonstrators were in fact armed.

“It’s easy to say they were completely unarmed,” Bradley said. “They had some light weapons. A lot of them would be burning tires or rolling tires to try to melt the razor wire. They had slingshots. They had a new and crazy invention, incendiary kites, where they would try to loft kites and set them on fire to try to light up some of the agricultural fields beyond the border with Israel.”

This from Buck Sexton:

The left wing media continues to be the useful idiots of Hamas:

Of course Israel makes mistakes. Many of them. But what is Israel supposed to do when a mob of violent rioters march towards them? Should it shut down the IDF and allow Hamas to overtake their military positions? Should it tear down the fences and allow a million Gazans, propagandized over a generation by violent regimes and steeped in virulent anti-Semitism, to walk into Israel proper?

Should they give full autonomy to Hamas and allow it to create a mini Iran right on its border? Should Jews pick up and leave Jerusalem? Even if Israel wanted to make a deal, Hamas makes no genuine demands, much less offers any concessions. It wants to provoke death. They want to become the victim. Sadly for the Palestinian people, they get plenty of help creating that fiction.

You will note that not a single senior Hamas leader was harmed. None of them were even visible. Then again, their policy is unique. And we cannot have a Palestinian uprising without a dead child. Initially it was claimed that the child was killed by Israeli tear gas, but that was quickly rebutted:

A Gaza health official cast doubt Tuesday on initial claims that an 8-month-old baby died from Israeli tear gas fired during mass protests on the Gaza border with Israel.

A Gazan doctor told the Associated Press that the baby, Layla Ghandour, had a preexisting medical condition and that he did not believe her death was caused by tear gas. He spoke on condition of anonymity because he was not allowed to disclose medical information to the media.

But before I read of the rebuttal I immediately thought who the hell brings a child into a war zone?

Palestinians do. They do in hopes of martyrdom. In hopes that their child will die.

That’s sick. Every time this happens I hark back to something Golda Meir said:

“We will only have peace with the Arabs when they love their children more than they hate us.”

Now for the comedy portion of our program

When you're a dead Palestinian martyr but your nose keeps itching pic.twitter.com/WUh60xq7t5

Hamas official: 50 of the 60 protestors killed were Hamas. https://t.co/g72kumnxyt

Moments ago, in what seem to be the dumbest ever #Palestinian TV interview, #Hamas official Salah Al-Bardawil confirmed what Israel was saying all along: "50 of the 62 deaths (80%) on the #Gaza border in May 14ᵗʰ were of Hamas operatives". The work of the just is done by others! pic.twitter.com/KHUuiPLFnq