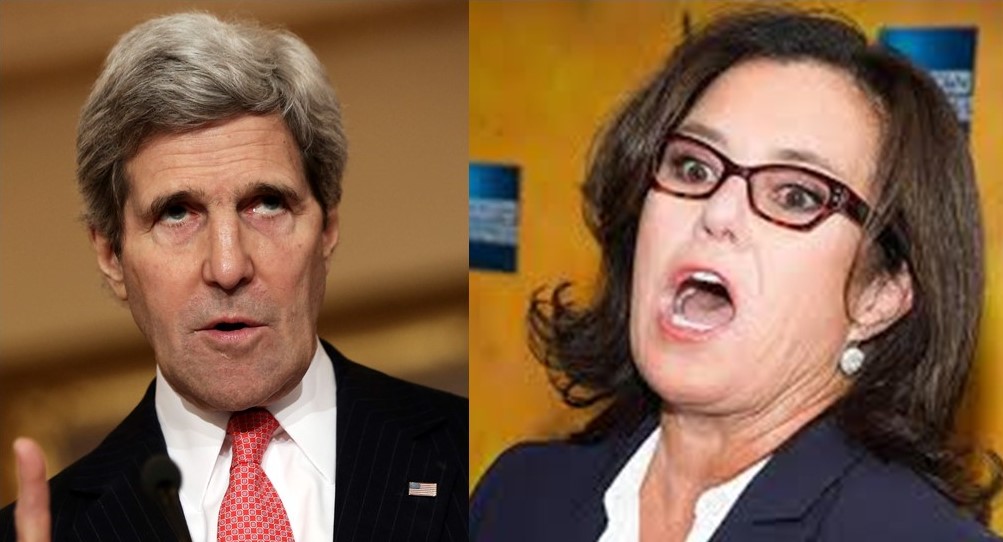 This sort of thing is usually relegated to third world countries and Communist states.

The loathsome insubordinate Sally Yates cited the Logan Act when she decided to entrap and cripple Michael Flynn for doing nothing more than doing the job he was tasked to do- talk to the Russians during the transition.  Using an act for which no one has ever been prosecuted, she sent FBI agents to interrogate Flynn. They reported that they saw no deceit in Flynn, but somehow he ended up being indicted by Robert Mueller for lying to the FBI after reportedly being exonerated by the FBI.

Now the FBI and the DOJ are doing their best to shield the public from knowing the dirty secrets about their abuse of the legal system to take Flynn down.

As we have discussed in connection with Carter Page, a former Trump campaign adviser against whom the Obama Justice Department obtained FISA surveillance warrants, a CI investigation on an American citizen proceeds on the suspicion that the citizen is an agent of a foreign power whose clandestine activities violate federal criminal law. That is, it appears possible (if not likely) that the Justice Department was operating on the theory that Flynn — a decorated combat veteran and co-author of a 2016 book that brands Russia as an implacable enemy of the United States — was an agent of the Kremlin.

John Kerry who testified about things he never saw in Vietnam, is once again acting against the government. He is playing Shadow Secretary of State canoodling with Iran with save obama’s wretched Iranian deal. This is a clear cut violation of the Logan Act.

“Fortunately for everybody, the Logan Act [is a] dead letter but if it were in existence, my friend John Kerry would be violating the Logan Act,” Dershowitz told “Fox & Friends.”

“He is negotiating, though he is not in the administration, and there are real problems with doing that,” he continued.

Will Kerry be visited by FBI agents and later indicted?

Did someone say violation of campaign contribution limits?

Long time critic of barack obama was singled out for prosecution and jail time as a dissident:

In 2012, conservative author Dinesh D’Souza produced an anti-Obama documentary, 2016: Obama’s America. The film earned over $33 million at the box office and was the highest-grossing documentary since 1982. The outspoken Christian conservative and bestselling author also released a book that year, Obama’s America: Unmaking the American Dream. Previously, in 2008, D’Souza gave Obama’s half-brother George $1,000 for a medical emergency when Obama would not respond to George’s pleas for help. George lives in a 6 by 10 foot hut in the slums of Kenya, and told D’Souza, “You’re the only guy I know I can call.” George then appeared in D’Souza’s documentary, expressing his disappointment that Obama had not responded to his request for help, “he’s supposed to help his family.”

It doesn’t appear to be a coincidence that the Obama administration is now targeting D’Souza for minor campaign finance violations. Last week he was criminally indicted. But what does this really mean? There is an old saying that a good prosecutor can get a grand jury to indict a ham sandwich, and as a former prosecutor, I agree.

D’Souza helped raise $785,000 for a friend of his who was running for Congress, Wendy Long. After he and his wife maxed out contributing the legally allowed $5,000 to the campaign, federal authorities claim that he illegally reimbursed straw donors for another $20,000 secretly coming from him. He faces up to seven years in prison if convicted.

Sentence? Eight months in a halfway house, five years probation and a $30,000 fine.

Rosie O’Donnell made illegally over-sized campaign donations to at least five Democratic federal candidates, according to a Post analysis of campaign filings.

The liberal comedian has regularly broken Federal Election Commission rules limiting the total any one person can give to an individual candidate at $2,700 per election. The limit applies separately to primaries, runoffs and general elections.

“Nothing nefarious,” the outspoken star and Donald Trump arch-nemesis wrote in an email to the Post. “I was not choosing to over donate.

“If 2700 is the cut off — [candidates] should refund the money,” she wrote. “I don’t look to see who I can donate most to … I just donate assuming they do not accept what is over the limit.”

Who is going to charge her with a crime?

That kind of thing only happens when there is a fascist regime (i.e. D) in place. Laws only are applicable to conservatives.

The question is, how can the liberals who skew the application of justice in America to favor liberals and use it as a political weapon against conservatives be purged from the DOJ? Apparently, even when Republicans are in charge, there is a reluctance to address the issue, or it is so pervasive as it is impossible to root out.

DJ, my hyper-partisan and delusional trump licking friend, neither Kerry or O’Donnell are president nor have they ever been. The ramification of the “application of law” now rest in the vagina grabbing wage stealing racist that you now suck up to non stop.

@Ajay42302: The article isnt about Trump you brain dead luciferian, the only mention of Trump is as Over-sized Rosie being an arch-nemesis. Did you have a nice Walpurgis Night?

@kitt: The cowardly, lying worm AJ represents the prototypical liberal. If a liberal gets through their term without being indicted for their crimes, they should be forgiven and forgotten for, if you don’t get caught, no crime was committed. However, as we see in Trump’s case, anything done anytime is fair game and THEY make up the evidence.

Why are you addressing me when I clearly responded to the cowardly dr john? From your very own admonishing of me ,

So, what is it that makes the rules which you yourself dictate only apply to other than you?

It’s as if the fa frauds go out of their way to expose their fraudulence. But then, what can one expect from none other than a true racist, con trump ass licker?

@kitt: Because he lies then is too cowardly to answer to his lies, AJ gets special treatment. Remember that. It’s important; whiny little lying liberals that don’t want to face responsibility for their actions are special little snowflakes.

@Ajay42302: Perhaps start reading the article before your Trump deranged luciferian mind twists every darn thing is Trump. It was Hillarys campaign manager that called blacks and young voters stupid, she forwarded an email with “sand ni&&er” in it. I find the hand of the creator of all kept her from the White House. Your Nephilim offspring worshipers failed too bad for you and your ilk. You seem sad, must be you missed out on the child sacrifice parts of the May celebration.
Seemed you were making another nonsensical statement not directly addressing anyone you suck at troll activities. Another wound for you https://www.aol.com/article/news/2017/02/18/melania-opens-president-trumps-campaign-rally-with-lords-praye/21716918/

@kitt: “I threw it all away to follow Jesus.”???-where is Melania story? Is this a source of your news?
Will DT actually be a p—y rather than just grabbing them, when he pleads the 5th? You think Rudy will go the way of The Mooch?–I miss that guy.
You just changed your source?? Are Melania and Baron still residing at the WH?–SHE’S AT 57%–HE’S AT 41%—34% with women—how long will you support this lying cheater?

@Richard Wheeler: By not bashing him at every turn? By asking those that do bash at every turn for reason?
As far as I know Melania and Baron are with DT wouldnt the bastids love to break up a marriage.
Checked and link did not work as desired is all, welcome back glad lettuce didnt kill ya.
As I dont partake the cable propaganda any longer I am not bothered by the petty dog pile. Unemployment down, the market has taken its correction I expected months ago. I have dozens of sources of news, most still need to be filtered every source has a slant.
Still hoping for Syria to be a glass parking lot?

@kitt: That marriage is clearly broken—she doesn’t even want to hold his hand–can you blame her?

Once again my obsessive stalker, I explicitly referred to the cowardly dr john in my comment, not you. Again for fear you still don’t get it, NOT YOU.

It was you who stated verbatim:

I was commenting to Bill, not to you. Kindly comment to me only when commented to.

You once again validate the profound hypocrisy and abject dishonesty that is pretty much the hallmark of this rabidly hate fest that you seem to reside at.

@kitt: Being a racist, AJ doesn’t care when a liberal display themselves as a racist; he supports them anyway because those are his directions from Soros.

And please be nice to Rich. He is still devastated that his duck-lawyer cover for his support for Hillary lost.

@Richard Wheeler: That first international trip over a year ago? Im sure you and your spouse have never had a spat, she does look to be a firey lil thing. Since then I have seen mild public displays of affection. http://www.dailymail.co.uk/news/article-5519565/Melania-Trump-trips-White-House-lawn-caught-President-Trump.html.
Caught a funny…everyone has a code name given to them by the Secret service there was a clip where an impersonator of hers said her code name was “flight risk”
I understand she is carrying out the Duties of FLOTUS wonderfully. The decorations for Christmas and the Easter Celebrations were beautiful. Perhaps you can remove your MSM bias by occasionally going to visit White House .gov
Gossip is an ugly thing they had the Obamas divorcing dozens of times.

@kitt: Any media anti DT bias I may have comes generally from Fox—guys like Smith and Caputo.
Comparing the warmth displayed between Barrack and Michelle to the frigidity of Donald and Melania—be serious.
What’s the over under on Rudy’s WH stay? I used to like this guy in his NYC days-he’s gone totally bat shit.

Comparing the warmth displayed between Barrack and Michelle to the frigidity of Donald and Melania—be serious.

Really…Paleeze, grow up you sound like a jr high mean girl. Like the theme of this article how the differing parties are treated by MSM and legal system worlds of difference. If they were affectionate in public they would twist it with their foolishness.
Cant tell you about Rudy, guess we have to wait and see.

[…] blog of the day is Flopping Aces, with a post noting the application of the law depends on your political […]

@kitt: Remember how warm and cuddly mule-faced Michelle was at the Mandala funeral, when Obama was caught flirting with the blond Swede?

@Deplorable Me: No need to be cruel to Mooch we know they couldn’t fly together you know how put out a person can be by waiting a couple of hours while the ol boy takes care of Americas business…the nerve!
http://www.dailymail.co.uk/news/article-2994838/Barack-Michelle-Obama-took-separate-taxpayer-funded-flights-LAX-despite-filming-TV-appearances-DAY-just-miles-apart.html
Room for her extensive entourage may not have been available on AF1.

@kitt: Well, there’s hardly room on a 747 for all of Michelle’s retinue. Don’t forget how important the environment and climate change is to them.