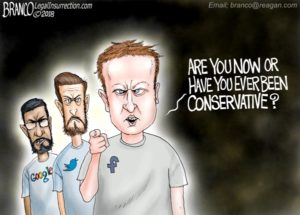 Welcome back everyone – straight to the crazy!

For some reason this press release showed up in my LinkedIn feed. In other words, governments authorize a scam to transfer wealth from the productive segment of society into their pockets

Using facts, reality, and science to make an argument? How dare they!

4/13 – Have U.S. Christians already lost the right to publicly speak against Islam?

Lest you think that what’s happening to Europe can’t happen here. Of course idiot leftists take pride in being the last ones to get eaten by the crocodiles

Great summary of the many aspects of our society that The Radical Left despises and wants to destroy, from mining and fishing to suburbs and sustainable energy

On the flip side of the previous story, it’s encouraging to see society tiring of these anti-science boors

Stories like this show the difference between the right & the left. Conservatives see a better opportunity to compete with the over-regulated ninnies, while Leftists wonder why we aren’t enlightened enough to emulate the standards of our European superiors

4/16 – Hotcoldwetdry Today: It’s Only Important To Persuade The Elites To Force Action On The Proletariat

Fleshing out the last link with some excellent analysis

His point was that there’s a big difference between being moral and moralizing. Being moral is about changing the way you act and actually helping others. It requires humility and tolerance because it arises from an awareness of one’s own moral failings.

Moralizing, by contrast, is about changing the way other people act—by force if necessary. Moralizing breeds intolerance and even tyranny because it springs from a belief that, like the pious Canadians, not only do you know the truth but you also have a solemn duty to impose it on others.

In America today, being moral is out and moralizing is in. Just witness the nonstop spectacle of moralizing everywhere you turn—from The New Yorker’s panicked denunciation of Chick-fil-A’s “infiltration” of New York, to gun control activist David Hogg’s boycotts, to the protestor with a megaphone shouting in a Starbucks clerk’s face.

4/17 – Nolte: The Media’s ‘Sean Hannity Standard’ Is a Wonderful Idea!

4/18 – No, Republican Presidents Aren’t Responsible For Most Of America’s Debt

There are three kinds of lies: Lies, damned lies, and Leftist talking points

Short answer: It blows. This article includes a good short video showing how Minnesota blew a fortune on wind energy.

Lefties will roll their eyes at that headline, and I’ll admit that the post’s title is a bit inaccurate. Leftists hate anyone who disagrees with them, not just white gun owners

And from the archives, seven years ago I gave a small shoutout to Barbara Bush for taking a minor jab at Sarah Palin in my two part series The Left Still Doesn’t Get the Tea Party, As Told Through the Stages of Death and Dying Part 2 of 2 [Reader Post]  Yes, in the last two years the establishment GOP has made no effort to hide their contempt for real Conservatives, but at least back then they kept up a good face, and at least Bush’s remarks were done with class.

This was also what I like to think was one of my best pieces for giving the Radical Left the mockery that they deserve – it includes some good Star Wars and Star Trek references to boot! If you want to read the posts in order you can find Part I here.

Back in his slimmer days, he was a successful genderqueer jihadi model. But his love of stuffed olive leaves put an end to all that. pic.twitter.com/cYFsJJ7eGH

Because. It’s. A. Metal. Statue. pic.twitter.com/REzyWZVhuO

Fresno State, home of grave-dancing professors, is all about free speech til the second @benshapiro steps on campus.

Tomorrow is Earth Day that special time of year when the Eco-Wackos run around and make total fools of themselves. Of course we already know the left want all law abiding American Citizens to be disarmed Traitor John Kerry signed the Small Arms Control Treaty after all disarmed citizens can then be easly rounded up into concetration camps/gulags it sure worked for both the Nazis and the Commies

@Spurwing Plover: I celebrate Earth Day by turning on every light in the house. To Hell with those anti-science Luddites!

@Brother Bob: I hate to point this out to global warming..er climate change er…climate restoration enthusiasts we just got 30 inches of snow in mid April shouldnt I be planting my banana trees harvesting coffee or some damn thing? Hey guys sorry about those surviving Polar bears we can take them off the endangered species list, After years of denial by the DNR some assh0le has a cougar on their cam, and the reintroduced wolves are getting to be a nuisance can we capture some and release them in your back yard?

4/17 – Nolte: The Media’s ‘Sean Hannity Standard’ Is a Wonderful Idea!

Failed to note but CNN hired Valerie Jarrett’s daughter just in time for the Deep State to have a familiar face to leak to: http://freebeacon.com/culture/cnn-hires-valerie-jarretts-daughter/
January 17th 2017.

CNN has assigned the daughter of one of President Obama’s top advisers to cover the Department of Justice.

The network announced in a press release that Valerie Jarrett’s daughter Laura would covering the Justice Department in 2017.

@kitt: Release the wolves is San Francisco – they can take care of the homeless problem! =8^)

Well, the transfer of wealth is the whole idea.

I had pointed out that new advertisers would flock to Ingram’s show and those who bowed to the liberal threats would be the losers. One of our common (and witless) liberal commentators said I was clueless and didn’t know what I was talking about. Hmmm.

4/13 – Have U.S. Christians already lost the right to publicly speak against Islam?

The left supports bad ideas. It’s their job. The way they do this is by making everything else look worse and to accomplish THAT, the facts have to be killed.

They are aware that it is ILLEGAL to aid and support illegal immigration, aren’t they?

4/18 – No, Republican Presidents Aren’t Responsible For Most Of America’s Debt

Well, as Hillary like to say, if you’ve done something really bad, just blame it on someone else as if you had no part in it.

Nothing like breaking wind to make a buck off the taxpayer.

As I’ve said before, I am still waiting for the Hollywood blockbuster where people resolve the impact of a violent crime against them by putting on pu$$y hats and screaming at the sky. Perhaps they can now add to that arsenal of response boycotting someone to the point that the criminals relinquish their guns and beg for forgiveness.

Two democrat presidents have already done it, Wilson a known...