The democrat conspiracy to obstruct Sessions and Nunes 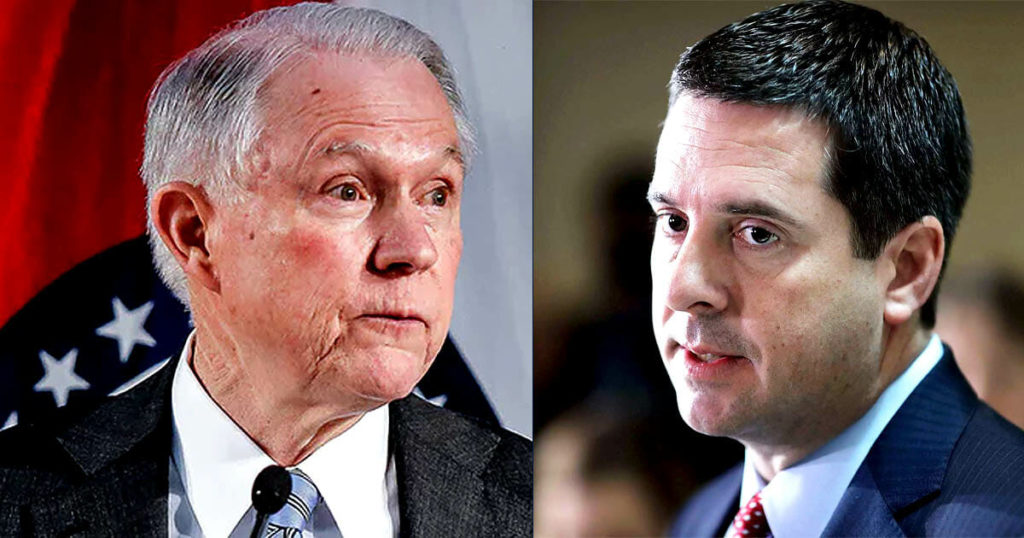 The framework of the conspiracy against Donald Trump has been materializing slowly but surely over the last year. It is clear by now that James Comey and Peter Strzok determined that hillary clinton was to face no jeopardy for any potential crimes she committed and did so well in advance of his July 2016 statement- no matter what she did. Comey was not alone in his conspiracy efforts. Democrat leaders knew what Comey was doing and probably knew about Obama and his staff spying on the Trump campaign and they became players in the conspiracy as well.

As Attorney General, Jeff Sessions was in the position to control investigations into the Obama/Clinton skulduggery and it was necessary to remove him in order to stymie efforts to discover the truth, especially as the magnitude of the scandal grows. Democrat scoured every possible nook and cranny to find something with which to take Sessions out of the equation and they found one.

His brief and innocent contacts with Ambassador Sergei Kislyak.

As a member of the Armed Services Committee, Sessions was expected to meet with dignitaries from all over the world. He met twice – briefly- with Kislyak as such a member:

Attorney General Jeff Sessions met with the Russian ambassador to the U.S. before the presidential election last year, his spokeswoman confirmed, raising questions about whether he misled senators who inquired about the Trump campaign’s ties to Moscow.

Sarah Isgur Flores told NBC News that Sessions did have a conversation with Russian Ambassador Sergey Kislyak last year. The meeting was first reported by The Washington Post.

But she said “there was absolutely nothing misleading about his answer” because Sessions was asked during the hearing about “communications between Russia and the Trump campaign” and not about meetings he took as a member of the Armed Services Committee.

According to his spokeswoman, Sessions’ meeting with Kislyak was just one of 25 conversations with foreign ambassadors in his role on the committee.

Well, that was all the democrats needed.

Nancy Pelosi, the House Democratic leader, called for Sessions’s resignation. “After lying under oath to Congress about his own communications with the Russians, the attorney general must resign,” she said.

“Sessions is not fit to serve as the top law enforcement officer of our country and must resign. There must be an independent, bipartisan, outside commission to investigate the Trump political, personal and financial connections to the Russians.”

“Several of the president-elect’s nominees or senior advisers have Russian ties,” Leahy wrote, before asking Sessions point-blank: “Have you been in contact with anyone connected to any part of the Russian government about the 2016 election, either before or after election day?”

But honesty was irrelevant.

“If reports are accurate that Attorney General Sessions – a prominent surrogate for Donald Trump – met with Ambassador Kislyak during the campaign, and failed to disclose this fact during his confirmation, it is essential that he recuse himself from any role in the investigation of Trump campaign ties to the Russians,” Schiff said.

In other words, Sessions was supposed to set aside his duties with the government. Bowing to the democrat pressure, he recused himself from the Russian investigation. He fell into the trap.

Subsequently, CBS News claimed that DOJ instructed Sessions not to report those contacts.

The Department of Justice claims Attorney General Jeff Sessions was “instructed” not to disclose meetings with foreign dignitaries.

Sessions, who met with Russian Ambassador Sergey Kislyak at least twice last year, didn’t list those interactions on his security clearance application because he was told he didn’t need to, according to the DOJ. The forms require applicants to list any contacts with a foreign government or its representatives.

“As a United States senator, the attorney general met hundreds — if not thousands — of foreign dignitaries and their staff,” DOJ’s Deputy Director of Public Affairs Ian Prior said in a statement. “In filling out the SF-86 form, the attorney general’s staff consulted with those familiar with the process, as well as the FBI investigator handling the background check, and was instructed not to list meetings with foreign dignitaries and their staff connected with his Senate activities.”

In June 2017 Andy McCarthy wrote that Sessions’ recusal was unnecessary. Later on this was made even more clear:

But on Monday, CNN reported that a newly released email indicates Sessions was telling the truth.

“A newly released document shows that the FBI told an aide to Attorney General Jeff Sessions that Sessions wasn’t required to disclose foreign contacts that occurred in the course of carrying out his government duties when he was a senator,” reported CNN’s Evan Perez, one of the authors of the original May story.

In the email from March, the FBI agent, whose name is not made public in the document released by the bureau, told Sessions’ staff that “he was not required to list foreign government contacts while in official government business unless he developed personal relationships from such contacts.” The agent then forwarded the email to his superior.

The FBI first released the document to a group called Right Wing Watch under a Freedom of Information Act request. CNN said it obtained the document separately from the Justice Department.

“The agent then forwarded the email to his superior.” Where it apparently died. (Peter Strzok?)

Sessions’ recusal put Rod Rosenstein at the helm of the DOJ and it was Rosenstein who appointed Robert Mueller in May 2017. Rosenstein almost certainly based the decision on the dossier and information gained from reverse targeting of Trump and despite assurances that no vote tallies were altered. Democrats were ecstatic.

One down, one to go.

Devin Nunes is the Chairman of the House Intelligence Committee. IN March of 2017 he was informed by a source that, if we can speak plainly, that the Obama administration was spying on Donald Trump and his campaign staff:

Nunes, himself a Trump transition member, said a “source” had shown him evidence that members of the Trump transition team had been unmasked — and that their identities had been revealed in U.S. intelligence reports. Nunes had previously raised questions about the unmasking of former National Security Adviser Michael Flynn, whose communications with Russia’s ambassador were intercepted by the U.S. government and whose identity was leaked to the news media.

Nunes suggested this unmasking might have been done for political reasons, saying the evidence he had seen had been widely disseminated across the intelligence community and had “little or no apparent intelligence value.” He added that he was trying to get more information by Friday from the FBI, CIA and NSA.

“I have seen intelligence reports that clearly show that the president-elect and his team were, I guess, at least monitored,” the California Republican told reporters. “It looks to me like it was all legally collected, but it was essentially a lot of information on the president-elect and his transition team and what they were doing.” He said the information he had seen was not related to the FBI’s Russia investigation.

Nunes said intelligence reports discussed “high-level people in the Trump transition.” He also said he was not in possession of the new evidence, but that he hoped the intelligence agencies would provide it to his panel through official means and that other committee members would be able to review it.

He personally briefed Donald Trump about this revelation.

Whoa. Democrats were highly annoyed by this action:

“What he has done is he’s scuttled, and put a cloud over, his own investigation, and he has become the subject —basically, he should be — of an investigation,” Cummings said on CNN Thursday morning. “It’s a real problem.”

Cummings, a Democrat, is one of several Democratic legislators who have rebuked Nunes, a Trump ally in charge of leading the House investigation into whether the Trump campaign coordinated with Russians to interfere in the U.S. presidential election. Cummings criticized Nunes for not informing other members of the House Intelligence Committee of the evidence Nunes said he had obtained, and said Nunes’ conduct threatened the integrity of the investigation into the Trump campaign’s possible relationship with Russian intelligence.

Democrats filed a load ethics complaints against Nunes, and Nunes agreed to temporarily step aside. This took Nunes away from investigating the conspiracy.

Second man down. Until December, when Nunes was cleared of the nonsensical charges.

WASHINGTON (Reuters) – The U.S. House of Representatives Ethics Committee on Thursday cleared the chairman of the House Intelligence Committee of charges that he had disclosed classified information, potentially clearing the way for him to resume leadership of the panel’s Russia investigation.

Republican Representative Devin Nunes, who had consistently denied wrongdoing, thanked the committee for its finding, but said the probe had taken too long and the accusations against him were politically motivated.

Nunes stepped aside from leading the intelligence committee’s investigation of Russia and the 2016 U.S. presidential election in April as the Ethics panel said it was investigating allegations that he had disclosed classified information.

The accusations against Nunes arose after President Donald Trump tweeted in March, without giving evidence, that former President Barack Obama, a Democrat, had wiretapped him as he competed for the presidency.

The committee dragged its feet as much as it possibly could:

Nunes criticized the ethics panel for taking “an unbelievable eight months” to dismiss the matter, and called on the panel to publicly release all transcripts related to his case.

Ethics committee staff could not immediately be reached for comment. In a statement, the panel said intelligence experts had concluded the information Nunes disclosed was not classified, so it would take no further action and the matter was closed.

Keeping Nunes out of the loop was the whole idea.

It is clear that democrats are doing everything they can to impair any probes into wrongdoing on the part of the obama administration and it DOJ and FBI. Crippling Sessions was key to the effort to undermine Trump as President and allow a witch hunt to be set in motion. Nunes was sidelined as long as possible to delay his participation in uncovering the broader conspiracy.

democrats will rue the day they dug these holes. The truth can be buried for just so long and they’re running out of dirt. As this continues, do pay attention to the cacophony from the left. As we creep closer to uncovering the scale of this obstruction the voices of left wing Indignation Choir will grow strong.