The results are in. Barack Obama was the roadblock to recovery 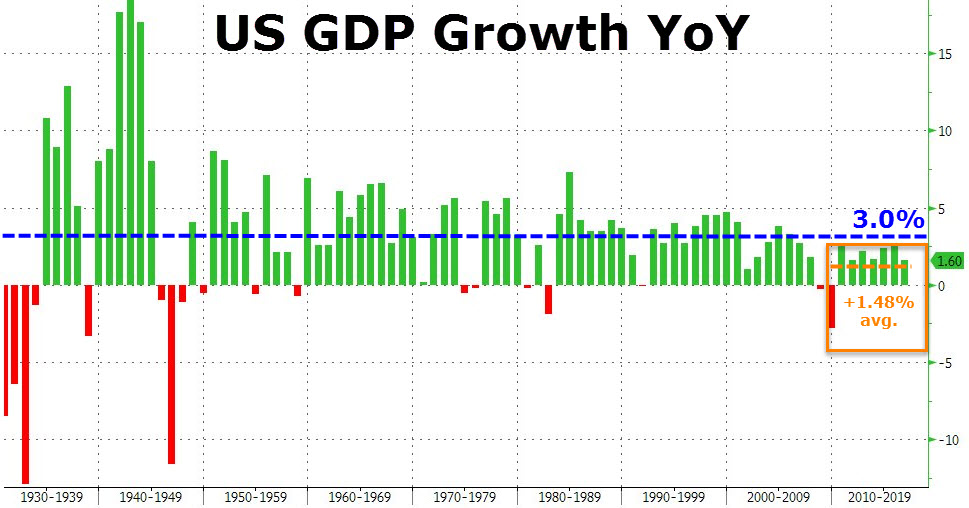 When he took office, barack obama haughtily demanded the he be handed the economy:

President Obama this summer has repeatedly blamed George W. Bush for the nation’s economic woes, a year after he took ownership of the economy and criticized those who “carp and gripe.”

The White House’s effort to tie congressional Republicans to Obama’s predecessor comes less than three months before the midterm elections. But the president’s campaign speeches this summer are in contrast to a speech he delivered in Michigan last year when his approval ratings were 17 points higher.

During a July 14, 2009, address in Warren, Mich., Obama said, “Now, my administration has a job to do, as well, and that job is to get this economy back on its feet. That’s my job. And it’s a job I gladly accept. I love these folks who helped get us in this mess and then suddenly say, ‘Well, this is Obama’s economy.’ That’s fine. Give it to me. My job is to solve problems, not to stand on the sidelines and carp and gripe.”

At the time, the AP wrote, “With four simple words — ‘Give it to me’ — President Barack Obama took possession of the economy.”

Except he didn’t. The very next day obama went on a Bush blaming binge that lasted eight years during which he did little more than carp and gripe.

Obama’s constant whining about the bad economy he inherited still finds resonance among a voting public that has been conditioned to ignore the president’s ruinous economic policies and concentrate their ire on President Bush.

Whatever shortcomings in economic policies Bush promoted – and they were many – the impact of his actions on  our current economy have long since faded. The economy is being driven by economic policies implemented by the Obama administration. The financial meltdown was a horrible event but after 5 years of legislative stimulus and, more imporantly, stimulus implemented by the Federal Reserve, we have yet to dig ourselves out of a hole despite spending trillions of dollars. The fixes applied by the Obama administration have not worked – period.

But try telling the American people that when it is routine for the president and the press to blame his predecessor for the moribund economy and jobless recovery. Perception is reality in politics. And Obama has been successful in feeding the perception that the opposition is to blame for his incompetence and rancid ideas. obama was bent on “spreading it around” and making so sure no one got a leg up on anyone else that he largely kept everyone down. He kept his jackboot on the throat of American business his entire tenure and tied the country in knots with regulations.

To see more of what obama blames for his record, see here and here.

The truth obama cannot face is that he was responsible for his moribund economy and worst recovery almost ever.

Obama’s 2.2 percent annual GDP growth has been just over half the 4.1 percent yearly hike in federal revenues. Between fiscal years 1965 and 2014, federal receipts averaged 17.4 percent of GDP. The figure for fiscal year 2015 was 18.2 percent. Uncle Sam is fat and happy. Meanwhile, only 3.6 percent of Americans under 30 own private businesses, a 24-year low, down from 10 percent in 1989. The 14.3 percent poverty rate for 2009 was 14.8 in 2014, the Census Bureau’s latest reading. Sentier Research reports that in 2015 real median household income, $56,700, was right where it was in 2007. America’s middle class has wasted eight years on the road to nowhere. For this anemia, please thank Obamacare, Dodd-Frank, the war on coal, green mandates, a flopped $833 billion “stimulus,” the 35 percent corporate tax (the civilized world’s highest), class warfare, and Obama’s 77 percent national-debt increase — from $10.6 trillion to $18.8 trillion. Obama and the Democrats typically pin this fine mess on Bush. His compassionate socialism certainly created widespread wreckage. But America hired Obama to change that. If Bush still is to blame, then Obama has accomplished nothing in seven years. As Bill Clinton revealed: Obama is either an economic Typhoid Mary or an economic Rip Van Winkle.

On Friday, the Bureau of Economic Analysis (BEA) reported that 2015 U.S. real GDP (RGDP) growth was 2.38%. No matter what revisions are subsequently made, 2015 will have been the tenth year in a row that RGDP growth came in at under 3.0%. The longest previous such run in U.S. economic history was only four years, and the last time that this happened was during the Great Depression (1930 – 1933).

Even worse, and this should be the defining issue of the 2016 elections, the Congressional Budget Office (CBO) is now forecasting that America will never see 3.0% economic growth again. This should be drawing howls of protest, at least from Republicans, but there has been little reaction thus far.

obama is the ONLY President not to see a single year with a GDP growth of 3%. Once he realized he was failing the economy, he took a new tack- this anemic economy was the “new normal” and that we all should accept it.

obama warned us that high unemployment would be the “new normal.” Economic stagnation is the new normal. Manufacturing jobs weren’t coming back. obama wanted to see Trump’s “magic wand”:

Apparently he does. Small business confidence began to soar even before Trump took office. Consumer confidence jumped in the light of Trump’s election victory. The stock market has skyrocketed. Critics are loath to credit Trump for this, but here’s what they predicted: GDP growth exceeded 3% over the last two quarters and is headed for another one, even before tax reform. None of this was predicted:

Trump’s budget proposal in May showed the government achieving a balanced budget in large part because it forecasted the economy to grow at 3 percent, a dramatic increase from the sluggish 1.6 percent growth in the final year of the Obama administration. Many economists, however, said the number was unrealistic.

As we previously noted, big business has responded positively to tax reform and there’s even more to report:

Comcast, which owns CNBC parent NBCUniversal, said it would pay 100,000 frontline and non-executive employees special $1,000 bonuses. The company also said it is making the move because of the FCC’s recent change in broadband rules and tax reform. It also said it plans to spend well in excess of $50 billion over the next five years on infrastructure improvements.

“This is exciting stuff. This is good. This is not just a whole bunch of guys saying I can buy back a lot of stock here and jazz up my numbers through financial engineering. This is a bunch of business leaders saying we can use this tax benefit to grow our company, keep our loyal employees and assist the community,” said Dick Bove, banking analyst at Vertical Group.

obama still can’t come to grips with the reality that he was the roadblock to recovery. Only now is the media begrudgingly starting to acknowledge that Trump’s first year is something more than a disaster.

It’s pretty obvious that American business could not wait for obama to depart the stage and he left none too soon. I guess Trump can take that magic wand out now and stick it where obama will take note.

OH, and pay attention to how much obama generates in income over the next several years. He did say

I am curious to see what that point is.

So the worst president in American history is followed by the best president in history. What results is skyrocketing growth and winning policies. It’s like taking an 0-12 UCF football team, putting in a great coach like Scott Frost, and making them a 12-0 team with essentially the same players.

Massive regulations to protect lobbying donors from competition, kill competition, protecting their outrageous profits like insurance companies being able to be a sole provider for vast areas of the country. While forcing citizens to pay for non-insurance, they say they are losing money I would love an audit on that.

Today Pres Trump signed the budget deal that effectively killed ObamaCare (ACA).
More importantly, for the economy, a few big businesses had already announced, based on it’s changes, new building/investing inside the USA & bonuses for thousands of their workers.
As he was commenting of all this, Pres Trump gently trolled all the other businesses in the USA as if they were Scrooges if they didn’t go ahead and give their employees bonuses, too.
He even tweeted:

Our big and very popular Tax Cut and Reform Bill has taken on an unexpected new source of “love” – that is big companies and corporations showering their workers with bonuses. This is a phenomenon that nobody even thought of, and now it is the rage. Merry Christmas!

Soon you can look at your paycheck and see if your boss is in on the latest rage (giving you a bonus) or is a Scrooge.
Brilliant!

@SquirrelHill: That book may see a second and a third edition.

Like illegal immigration, all it took to provide a vast improvement in the economy was the absence of Obama. Henceforth, one would have to have a desire for suicide to elect another liberal to run our economy.

It’s like people raising glasses and congratulating themselves, as the Titanic heads at full speed into the ice field. Trump has been throwing as much coal into the boilers as fast as possible. He’ll burn the furniture and and the books in the library to get up more steam, and throw passengers deemed unnecessary overboard to reduce weight. It’s easy, if all you care about is more steam and more speed.

@Greg: Yes a toast! To a comfortable retirement and a bit left over for the kids to set aside Greg the doomsayers said for almost Obamas entire time the econony was going to crash due printing money like mad, just live guy worry wont make you any taller. I feel sorry for all those that stuffed their savings into annuities cant trust insurance companies.

According to the White House and the NYT, the “Bush recession” ended in June 2009.
Based on this small uptick (for which he bore no responsibility) he boldly ran to the front of the parade and said, “Follow me!”

@Greg: Yeah, prosperity, hope and financial independence can be a real bummer to the Democrat agenda of keeping people in poverty and dependent upon the government and their handouts.

Everytime Obaam speaks it should be in a a sped up tone a untranlatible gabbling all high pitched and squeaking like a sped up tape on a tape or casstette recorder sound like Chip & Dale of Alive,Simon and Theador

@Greg: I guess you prefer the dead in the water Obama way. How progressive.

@Greg: I think of it more like Capt. Trump of the USS Enterprise, going where no America has gone before at warp speed, and leaving the leftie Klingons to wail and gnash their teeth in his dust.

I knew it, you knew it. Hell: Everyone knew it!!! I just want to say right now that I may not be busy online as much — though the concern or passion both still burn — but for two torturous terms, I did what I could, like other citizens did, trying to respond to or write about or publicly set the record straight via Fb Notes (scores of ’em), Blogger & WordPress posts, a Twitter account, my Disqus comments, etc., to CALL OUT the left specifically Obama. I saw (and still see in him) an Evil Incarnate. Don’t let your guard down or turn your back on him/his ego/his OFA. I mean nothing can be put past him.

This is a pile of anti left B.S.

0
Reply
Deplorable Me
Reply to  rjones

Actually, the LEFT is a pile of anti-left B.S.