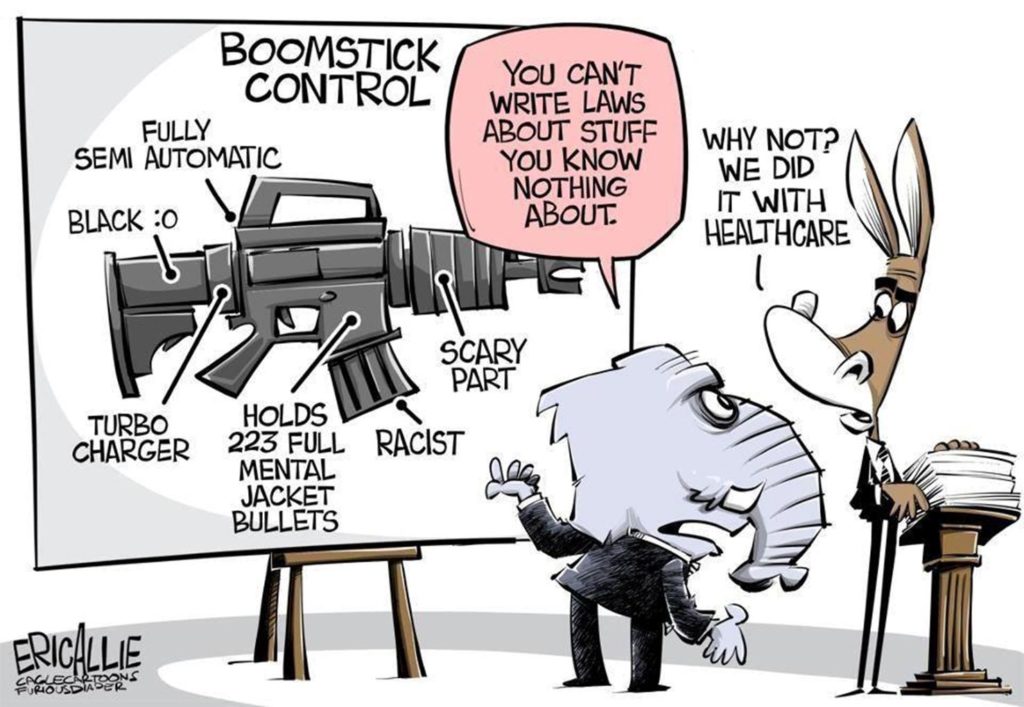 The bodies in Texas weren’t cold when the moronic Senators from my state of CT- Murphy and Blumenthal- were already politicizing the tragedy. Both of these tools called for “common sense” gun control measures as if none existed today. Further, they failed to mention what these simple “common sense” measures are, but then again they never do. So let me offer an outline for more gun control.

Let us assume that democrats will be calling for another ban on assault weapons, or anything that looks like an assault weapon or just looks plain scary, toys included. Such a plan would have to include confiscation. Before we agree to such a surrender, we should demand something first- that weapons be seized from criminals and those who should not own them. It would make no sense for legal gun owners to surrender their guns before weapons were taken from criminals. Law abiding gun owners would be surrendering their weapons in accordance with the new gun control but that would leave only criminals with guns.

Firstly: democrats and liberals need to guarantee that all guns have been taken from all criminal elements and from those who do not legally own them – and prove it- before legal gun owners surrender theirs. I look forward to hearing how anti-gun groups propose to do this.

Second: Guarantee that current laws be enforced. Devin Partick Kelley should not have been able to obtain a gun, yet he did. He was able to do so because the government failed to do its job. Kelley was a felon who fractured the skull of his child and served 12 months in prison. That automatically disqualified him for gun ownership but the Air Force did not add him to the FBI NICS  database and Kelley was able to buy weapons. More laws won’t matter if they are not properly administered.

Republicans sought to introduce aggressive legislation targeting felons trying to purchase guns and stop them but for whatever reason democrats resisted it- going so far as to filibuster the effort. The obama administration wasn’t very interested in prosecuting those lying to illegally secure firearms either:

But, two, and this is an even more critical piece, if it had been reported to the background database, when he went into Academy to buy this — these weapons, he lied on the forms. That is a felony to lie on those forms. The Obama administration didn’t prosecute those cases. In 2010, 48,000 felons and fugitives lied and illegally tried to purchase guns. They prosecuted only 44 of them.”

And oh yeah- you have to amend the Constitution.