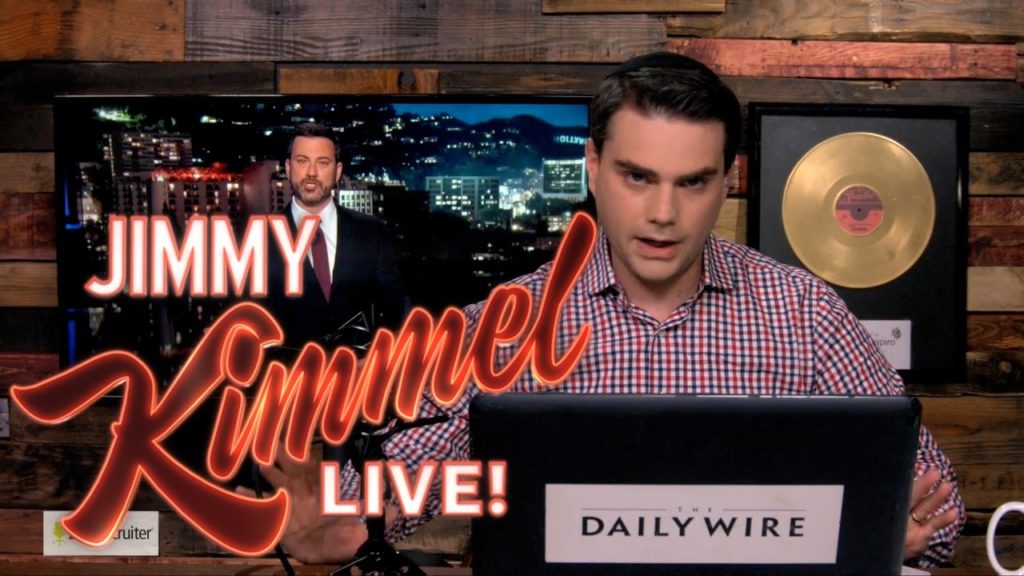 Remember the days of Johnny Carson, when any political jokes and commentary were not the same as political advocacy and activism? Well, today’s generation now gets the likes of Jimmy Kimmel. He’s become the latest Hollywood poster boy for Obamacare defense.

It didn’t just happen within this past week, however. Around 4 months ago, this happened:

He tugged on our emotional heartstrings and played liberals like a violin with his anecdotal story.

And now he’s been on the emotional attack against Senator Bill Cassidy and the latest GOP healthcare bill, claiming the Senator “lied right to my face about healthcare”.

Sen. Bill Cassidy (R-La.) insists the bill would cover Kimmel’s son for any heart surgeries needed in the future. Kimmel doesn’t buy it. But, instead of respectfully debating what truly is in the bill and what’s not, the late-night host does what so many on college campuses do when “debating” an issue: They demonize their opponent by questioning moral virtue. They get personal, as Kimmel did in his case by calling Cassidy a guy “who lied right to my face.”

“Oh I get it, I don’t understand it because I’m a talk show host,” Kimmel said to Cassidy from afar Wednesday night. “Then help me out. Which part don’t I understand? The part where you cut $243 billion dollars from federal health care assistance? Am I not understanding the part where states would let insurance companies price you out of coverage for having pre-existing conditions?”

“Could it be, Sen. Cassidy, that the problem is that I do understand and you got caught with your G-O-Penis out. Is that possible?” he asked.

Wow…I bet he kisses his baby son with that potty-mouth.

Rather than debate the Senator face-to-face, he’d rather attack a FOX News host by threatening to “pound” him when he sees him (kinda sounding Trumpish, don’t’cha think? “Beware that, when fighting monsters, you yourself do not become a monster….”).

4 months ago, Ben Shapiro (whose daughter was treated at Children’s Hospital by the same doctor as Kimmel’s baby under similar circumstances) had the “moral authority” to offer a perfect, civil, compassionate, disagreeing response to Jimmy Kimmel:

Last night gave us round 3:

But does Kimmel’s appeals to emotionalism pass the Ben Shapiro Test?

Some of us would rather be entertained rather than watch this guy. Carson was worth the wait to go to bed.
Limousine politics always a turn the channel feeling.

The one part of Obamacare that IS working as designed is the part where once an entitlement is offered, it cannot be taken away. Obamacare is cratering and it is taking 1/6 of the economy with it. Yet those still clinging to that fantasy of the Obama-provided utopia want to ignore that when Obamacare finishes imploding, they will have no healthcare. So, if the replacement is as falsely wonderful as the false promises of Obamacare or not, the disaster has to be replaced.

Of course, the liberal solution is to plow more trillions of dollars into the massive failure so the disaster can be delayed a bit (and Obamacare can be declared a wonderful success… a bit longer), but Republicans, not being as enthusiastic about socialism as Democrats, don’t see it that way and have legitimate differences on how to preserve health care without following the path to ruinous socialism.

Lemme get this straight.
Jimmy Kimmel makes MILLIONs of $$$$ every year.
Right?
But, once his child hits the $1 million mark on his health insurance he’s going to let it die???
REALLY?
What did he work so hard to earn so much for, if not for family?
Does he collect yachts?

Does he no know he can pitch in out of his own pocket to pay family medical bills?

And, btw, if he were poor, the hospital, the doctors, the staff even the pharmaceutical companies would assist.
Children don’t die due to insurance running out.
Or, I should say, they didn’t BEFORE Obamacare!

Hillary did her college thesis based on this, mentioned in Obamas books, These are Sal Alinskys rules for radicals, a communistic manifesto.

This is why the debt ceiling must be lowered!
Government mandates on crappy coverage eliminated!
The foundations of the Constitution restored.

1) Healthcare – Control healthcare and you control the people.
2) Poverty – Increase the poverty level as high as possible; poor people are easier to control and will not fight back if you are providing everything for them to live.
3) Debt – Increase the debt to an unsustainable level. That way you are able to increase taxes and this will produce more poverty.
4) Gun control – Remove people’s ability to defend themselves from the government. That way you are able to create a police state.
5) Welfare – Take control of every aspect of people’s lives (food, housing and income).
6) Education – Take control of what people read and listen to; take control of what children learn in school.
7) Religion – Remove the belief in God from the government and schools.
8) Class warfare – Divide the people into the wealthy and the poor. This will cause more discontent and it will be easier to take from (tax) the wealthy with the support of the poor.

Does any of this sound like what is happening to the United States?

?????
Who is Jimmy Kibbles again?
And why is he barking so much?
Needs a shock collar.

Late night hosts have to compete to be the most left wing crybaby to get audience share. See, those who don’t have to get up early and go to work are about the only ones staying up and watching these whiners, so it is important to appeal to them, not patriotic Americans.

No liberals worried about the 7 million people, many undergoing serious treatments and comfortable with their doctors, that got unceremoniously kicked off their coverage. That didn’t properly nourish the left wing narrative. But, now it is important to dust off the old “push granny off the cliff” lie to try to preserve the worst legislation in history. Never mind that MILLIONS are on the verge of losing their coverage, that costs continue to soar or that new and greater taxes and fees are just around the corner.

If you were wondering how Jimmy Kimmel suddenly became an instant expert on Graham-Cassidy, it turns out he had a lot of help including from Sen. Minority Leader Chuck Schumer. The Daily Beast reports Kimmel has had a running conversation with Schumer and other outside experts for several weeks:

@Wordsmith: Such enormous quantities of stupidity do not happen naturally; it has to be cultivated.

Assuming your Hotair link has merit and leading back to the context of this thread, so what? What precisely is your argument? Do you believe that Bob Hope or Johnny Carson never consulted with a politician or had their staff do so?

Or is it that comedians should never get emotional and if they do, never about something that goes against what 1 political party is selling? And that would be of course, even if that party is selling a bill that is profoundly flawed, has not been debated, isn’t fully disclosed, affects 1/6th of the economy, denounced by multiple governors and most medical research groups and even the AMA, admitted to causing more problems by even its supporters, and exposed as built on lies. And it’s also interesting that this bill flies in the face of most everything this blog wailed against such as “ram through”, “pass it and see what’s in it”, ‘not a single opposition supporter” and on and on and on.

But this isn’t the first time comedians have stepped in. Remember when Jon Steward stomped a mud hole in Betsy McCaughey’s ass over her lies? And I’m sure there are many more.

@Ajay42302: What is your substantiation for calling Trump a racist?

Does Hillary dropping N-bombs make her a racist (and, by extension, all of her supporters)?

Shouldn’t the left be demanding Yale University change its name because Elihu Yale was a slave trader and the school was built with support from slave traders?

Tell us of how Trump “breached the Constitution”.

Why do liberals get to make vile, unsubstantiated accusations in media but conservatives get fired if they voice a non-liberal opinion?

Are immigration laws expected to be enforced?

Who is justifying “mass murdering people not of their heritage”?

Who has ever asserted that “all Hispanic and Latinos are murders, rapist, and drug dealers”?

When did Trump ever grab anyone’s vagina and who was it?

What did Trump lie about?

Whose wages did Trump steal?

What is the nature of Trump’s “con”?

How did I indicate your answers would be meaningless?

What answer have you provided that has been ignored?

“First of all, the Harvey Weinstein thing, people like this false equivalence of that’s somehow equivalent to what happened in Las Vegas,” Kimmel added, arguing that the alleged assault of dozens of women does not deserve the same reaction as the killing of nearly 60 people. He said that Weinstein is “not a friend of mine,” adding, “I’m not in the movie business.” As a once and future Oscar host who is friends with many of the movie stars in Weinstein’s orbit, that claim is a hard one to buy.

“And I’ll add that that story came out like I think moments before we went to tape on Thursday and we didn’t have a show on Friday,” Kimmel continued.

While The Daily Show’s Trevor Noah managed to work a throwaway joke about Weinstein into his Thursday night show last week, Kimmel, Stephen Colbert, Seth Meyers, Jimmy Fallon and James Corden all did not cover it until Monday. John Oliver was the first host to fully address it Sunday night.
But even when Kimmel did finally talk about Weinstein on Monday, he used the story more as a tool to go after Trump Jr. than anything else. “Next time you’re defending your father and you think it’s a good idea to draw a comparison between him and a freshly accused sexual predator, don’t. It doesn’t help,” Kimmel told him, before delivering one joke about Weinstein just to prove that he could.

On GMA, Kimmel went on to accuse “gun nuts” of “trying take any comedy bit I did out of context and use it as some kind of proof” that he is not an ally for women, including some pretty gross moments from The Man Show.
“They’re saying that I’m calling myself the moral conscience of America, which I most certainly never did and most certainly never would,” he declared.
Kimmel is probably telling the truth when he says he never set out to become the “moral conscience of America,” and we should not necessarily expect a late-night host to embody that role. On the two recent occasions that he did decide to speak out, it was because of a personal connection to those issues. His baby son’s open-heart surgery turned him into a health care advocate and his own childhood connection to Las Vegas made him feel for that city.
His decision not to spend a similar amount of time on Weinstein seems to confirm that the issue of sexual misconduct does not hold a similar place in his heart.

@Wordsmith: In his defense, Kimmel is no more of a hypocitical blow-hard than any other liberal.