The worst politically biased hack in the news today 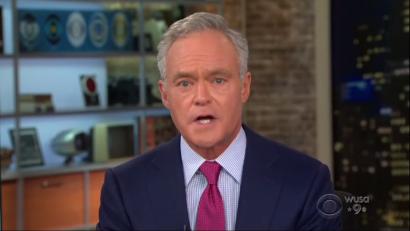 That would be Scott Pelley. He is simply the worst hack in an anchor position on a network new show today. Recently he, as did that fruitcake Joy Reid,  suggested that Steve Scalise is in part to blame for his own shooting.

It’s time to ask whether the attack on the United States Congress, yesterday, was foreseeable, predictable and, to some degree, self-inflicted.

Too many leaders, and political commentators, who set an example for us to follow, have led us into an abyss of violent rhetoric which, it should be no surprise, has led to violence.

Yesterday was not the first time.

In December last year, a man with an assault rifle stormed into a Washington-area pizzeria to free child sex slaves whom Hillary Clinton was holding there — or at least that’s what political blog sites had said. He fired into a locked door to discover no children in chains.

Sen. Bernie Sanders has called the president the “most dangerous in history.” The shooter yesterday was a Sanders volunteer.

You might think that no sane person would act on political hate speech, and you’d be right. Trouble is, there are a lot of Americans who struggle with mental illness.

Earlier, on March 8, CBS’s Scott Pelley suggested President Trump had psychological problems, asking longtime Democratic official Leon Panetta: “Is it appropriate to ask whether the President is having difficulty with rationality?”

Pelley was born a left wing hack and remains one to this day.

On the January 2, 1996 edition of CBS Evening News, Pelley perhaps overdramatized the impact of the government shutdown when he opened his story this way: “In April, terrorists tried to kill them. Today politicians stopped their paychecks. In Oklahoma City’s Social Security office, they’re being ordered to work for nothing.”

During a May 9, 2010 profile of Secretary of State Hillary Clinton on 60 Minutes, Pelley hailed that “she doesn’t let anyone work harder’ and “she’s the only person in American politics with global star power close to” that held by Barack Obama, Pelley gushed: “A few Secretaries of State have been famous; none has been a first name celebrity like Hillary.”

In a softball interview with retired liberal Supreme Court Justice John Paul Stevens on the November 28, 2010 edition of 60 Minutes, Pelley touted Stevens’s opposition to the court ruling on the 2000 presidential election: “He thinks [Bush v. Gore] is one of the Court’s greatest blunders….There were many people in this country who felt that the Supreme Court stole that election for President Bush.”

More of that at the link.

This is where Scott Pelley comes in. Almost unbelievably, he gave this deranged woman a platform to smear Karl Rove on 60 Minutes.

In her 60 Minutes interview, Simpson claimed to have been Rove’s secret agent in Alabama. She said that during Siegelman’s term as governor of Alabama, Rove had asked her to follow Siegelman around and try to get photographs of him “in a compromising sexual position” with one of his aides. This led to one of the great moments in recent broadcast history:

60 Minutes’s Scott Pelley: Were you surprised that Rove made this request?

Simpson: I had had other requests for intelligence before.

Pelley was at a crossroads: He knew that either (1) he was on the verge of uncovering a whole series of Rovian plots, the stuff of which Pulitzers are made, or (2) he was talking to a lunatic. Intuiting, no doubt, which way the conversation was likely to go, Pelley discreetly chose not to inquire further.

“There was a change in appetite for the types of stories that I often specialized in, which tend to be a lot of government watchdog stories,” Attkisson said.

It was at least the second time in as many months that Attkisson had criticized Pelley by name. The first was during an appearance on C-SPAN.

During her NPR interview, Attkisson said she was “clearly discouraged” from pursuing stories once it became clear that they’d be unflattering to the Obama administration.

For a glimpse of Pelley’s naked disdain for Trump, check out a few of these lines:

Which might explain why the ratings of the CBS Evening News has spiraled into the dumper.

Pelley was overflowing with criticism of Republicans but had not a single example of democrats exhortation to violence. He seems to have missed Loretta Lynch’s words:

They’ve marched, they’ve bled – yes, some of them have died. This is hard. Every good thing is. We have done this before. We can do this again.

Or Tim Kaine encouraging people to “fight in the streets.”

Pelley has always seen it as his obligation to lecture Americans about the depravity of Republicans while carrying water for democrats. America has grown weary of it, which almost certainly has contributed to his dismissal from his lofty self-righteous perch at CBS Evening News. I was going to write good riddance, but I would not have meant it.

Out, damned spot! Out, I say!—One, two. Why, then, ’tis time to do ’t. Hell is murky!—Fie, my lord, fie! A soldier, and afeard? What need we fear who knows it, when none can call our power to account?—Yet who would have thought the old man to have had so much blood in him.

if one follows pelley’s, douche bag, international display of superior illiteracy is amazing. his interview with the former President of Iran was a total disaster worse the kelly’s with Putin. lynch and sanders have called for blood on American streets, and pelley reverse this as a monumental stand against Trump. cbs has no limits to the hypocrisy which it panders to the American people. Joseph Goebbels would be proud of pelley , for one does not have to understand the elements of propaganda but only on how to communicate it. what is this socialist’s salary , benefit package and his golden parachute?

There was a contest? Who took runner up or Miss Congeniality sorry is is Ms.or Ze, did he get a sash and crown, I am glad I didn’t see the swimsuit competition. Or is there no winner just participation trophies for all the lying hacks.

Scott Pelley is ugly inside and out. A bitter, Godless, leftist hack who has an irredeemable soul and failed career.

According to Gallup’s annual media study, only 32% of Americans (primarily Democrats) trust the media. Gallup also reports that the media is one of the least respected professions in America. Americans (independents as well as Republicans) view the media as biased and dishonest.

If people started shooting media members, wouldn’t it be correct to say media members brought it on themselves?

Scott Pelly has always seemed to me to be the protypical effete,
smug media type. It never occurs to them that they really went
into journalism because they can’t handle math.

Sadly, Pelley is not a real standout as far as liberal ass-suckery among the liberal media is concerned. He has lots of company.

This ass clown, Scott “Pelletbrain” Pelley, is just one of many!

Why do you think I hate the UN? Could it be because they do...
Russia vs. U.S.A.: Let Slip the Dogs of War

But you hate the UN, don’t you? Putin will have to de...
Congress's 1/6 Committee Claims Absolute Power as it Investigates Citizens With No Judicial Limits

Trump has yet to be held to any standards, but that moment i...