Forget Trump. What did Putin and Rouhani have on obama? 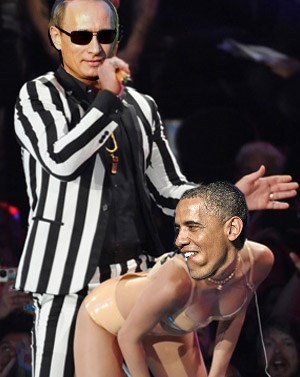 “What does Russia have on Trump?”, asks Nancy Pelosi.

The better question is, what did Putin and Rouhani have on obama?

It’s June of 2001. George W. Bush is President. Bush has a meeting with Vladimir Putin and later said

“I looked the man in the eye. I found him to be very straight forward and trustworthy and we had a very good dialogue.

“I was able to get a sense of his soul.

“He’s a man deeply committed to his country and the best interests of his country and I appreciate very much the frank dialogue and that’s the beginning of a very constructive relationship,”

For that, Bush was roundly derided by democrats. The NY Times piled on in 2007

Ironically, one of barack obama’s first actions was to take it up the wazoo and abandon that missile system as an offering to Putin but the NY Slimes did not scold obama for it nor did they ask what Russia had on obama. This came after his famous apology for America tour.

Then Russia became our friend while obama was President. Mitt Romney got an earful from obama in the 2012 Presidential debates when Romney claimed that Russia was our #1 geopolitical foe.

“The 1980s are now calling to ask for their foreign policy back because the Cold War’s been over for 20 years.”

“On all these issues, but particularly missile defense, this, this can be solved, but it’s important for him to give me space,” Obama told Medvedev, referring to incoming Russian president Vladi­mir Putin.

“This is my last election. After my election, I have more flexibility,” Obama added.

“I understand,” Medvedev replied. “I will transmit this information to Vladimir.”

Was there a single democrat who wondered what Russia had on obama?

In fact, democrats piled on Romney as did obama:

“I don’t know what decade this guy’s living in,” MSNBC host Chris Matthews said with a sigh on March 28, 2012. “Is he trying to play Ronald Reagan here, or what?”
“This is Mitt Romney’s severely conservative problem,” University of Georgia professor Cynthia Tucker opined on-the-air. “It made Romney look dumb. He’s not a dumb man, but he said something that was clearly dumb.”

Huffington Post reporter Sam Stein agreed that Romney’s statement was evidence of an “antiquated worldview.” He fretted further about how Romney, should he become president, would enter the office having severely complicated America’s bilateral relations with Moscow given his carelessly provocative statement.

“I personally am worried about what it says to the Russian people,”

I can appreciate why the Romney campaign would try to make Obama’s “hot mic” story interesting, but the problem is the former governor just doesn’t have any real policy chops in this area. He’s out of his depth, and struggles when the subject takes center stage.

It’s not just that Romney is uninformed; it’s that he hasn’t figured out how to fake it.

“I think he really needs to not just accept these cataclysmic sort of pronouncements,” Powell admonished. “Let’s not go creating enemies where none yet exist.”

These people made very clear that they felt Russia was our best friend. And then the best friend of the US invaded Crimea. Maxine Waters still thinks it was Korea.

obama made a pathetic attempt to defend his complete failure by misstating what Romney said:

And so my response then continues to be what I believe today, which is Russia’s actions are a problem. They don’t pose the number one national security threat to the United States.

That wasn’t what Romney said, but the obama-compliant press ignored it. Obama’s response to the invasion was utterly ludicrous:

Obama unveiled them Monday in a four-minute statement as flat-toned as a legal notice in the classifieds. The consequences? Visa denial and frozen assets for 11 people, seven of them Russian.

Seven! Out of 140 million. No Putin. No Dmitry Medvedev. No oligarchs. Nor any of Putin’s inner circle of ex-KGBers. No targeting of the energy sector or banks, Russia’s industrial and financial lifeblood.

This elicited unreserved mockery from the targeted Russians themselves. One wondered whether the president’s statement had been written by a prankster.

CNN threw up its hands in another one of those “What can obama do?” articles in which they protect their favorite President.

Again, no one questioned what Putin had on obama.

Then obama essentially became an agent of Iran. He pretty gave away the store in the historically bad deal he made with the mullahs, which included $1.7 billion in laundered cash.

And no one asked what Rouhani had on obama.

Since then, both Russia and Iran have been harassing US planes and ships. Right on cue, CNN ran another one of those “what can obama do?” stories defending obama.

Iran seized two US Navy vessels and humiliated the sailors on board. And John Effing Kerry thanked Iran for it.

And no one asks what Rouhani had on obama.

It is of great amusement now as the legacy press is Russian to judgment on Trump but never stopped to ask why obama for eight years took it up the butt for Putin and much of that acted as the Ambassador for Iran. Now the expectations have been raised while obama took a dive.

This is not the first time I’ve noticed but the same press that now hounds Trump for…well, I don’t know at all what he’s done to deserve the invective heaped upon him. If there is a spy among us, he left office last month.

I don’t know what’s in the water at CBS, but Scott Pelley is arguably the biggest a-hole in news today.