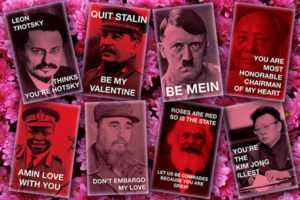 Thank you, Maryland legislature. Your stupidity revived a post I wanted to write a year ago that got overtaken by some much bigger events in 2016. But now thanks to two Maryland Representatives the idiocy of “Affirmative Consent” (AC), aka: The “Yes Means Yes” Law has made its triumphant return. What is that law, you say? Something this stupid must have originated from our Venezuela-in-training state of California! via Robert Stacy McCain:

The new law requires a verbal “yes” at every stage of intimacy, right? Now, let us imagine the situation in which a student says “yes” to X, then says “yes” to Y, but says “no” to Z. In the matter of X and Y, she was enthusiastically consenting. However, when her partner wanted to do Z, she said “no” — and her partner did Z anyway, so that he is now accused of sexual assault. Question: What is Z?

Must we pretend ignorance about what is going on among young people nowadays? Are adults supposed to pretend that they don’t know how a porn-saturated hyper-sexualized culture has influenced the appetites, habits and attitudes of hedonistic youth?

Sexual assault is a crime.

Rape is not a school disciplinary infraction, and the attempt by universities to set up a pseudo-judicial system to deal with accusations of sexual assault was always a dubious endeavor. What college administrators have done, in their effort to appease feminists, is to establish phony “courts” where people can be “convicted” of very serious crimes without the due process rights guaranteed under the Constitution.

Notice that California’s new law pertains to a specific category of crime (sexual assault) committed by a specific category of offenders (college students) in a specific place (the college campus). There was apparently no need, in the eyes of California legislators, for new laws changing the standards of proof required to convict someone of theft, robbery or drug possession. Nor does the new California law affect high school students. And a college student accused of rape retains all his constitutional rights, so long as the accusation relates to sex that takes place somewhere outside the campus setting. That is to say, if a student at Cal-Berkeley goes to a Shattuck Avenue bar, where he picks up the waitress who takes him back to her apartment, their intimacies are not regulated by the regime of “affimative consent” so long as (a) the waitress is not also a Cal-Berkeley student and (b) her apartment is not on campus.

To put it as bluntly as possible, the new California law treats college students like an inferior caste. It’s the New Jim Crow, and this law will eventually be challenged in court as a violation of students’ basic constitutional rights.

So why stop at college students? With no larger issues in the state of Maryland two reps in affluent Montgomery County want to start inflicting this on high school students:

Two Maryland lawmakers are pushing legislation that would require the state’s public schools to teach a “yes means yes” standard for sexual consent, wading into a national debate as they try to change the way young people think about romantic relationships.

Maryland would become only the second state to require public schools to teach affirmative consent if the legislature and Gov. Larry Hogan (R) approve the proposal by Dels. Ariana B. Kelly and Marice Morales, both Montgomery County Democrats. California adopted a similar mandate in 2015, in the wake of rape allegations involving a student at Stanford University who argued that his sexual encounter with an intoxicated young woman was consensual.

A bill sponsored by Kelly and Morales that would require Montgomery County Public Schools to teach affirmative consent in sexual-education classes will be the focus of a hearing Tuesday before the House Ways and Means Committee, which oversees education policy. The two lawmakers say they are drafting a companion piece of legislation that would extend the mandate statewide.

Yes, not being content to ruining college life, radical feminists now want to ruin the high school experience as well. Can anyone seriously imagine having a dating experience with AC? Or for this of us whose days of dating someone new are well behind us, can you imagine having had this kind of crud on your mind when you were looking to get to know better someone who you shared an attraction with? This is just another effort of unhappy people seeking to make everyone else as miserable as them. So how does this work in practice? Via Ace, here is one angry feminist’s experience with AC as told in NY Mag (censorship mine):

Keenan herself, though, sometimes finds it hard not to go on the offensive. She’s so used to laying down the nitty-gritty details of consent that she’s been known to open romantic interactions with a spiel that feels straight out of a student handbook.

She animatedly tells a story about a recent Tinder rendezvous: “One time, I agreed to meet with this guy at 8 or 9 at night. Before we met, I said to him, ‘This is the work I do, I know the chief of police … so, don’t try and get creepy; I know all my rights.’ And five minutes later, he was like, ‘Actually, I’m really not OK with how you just assume I’m a bad guy. And I get very bad vibes from that, so we shouldn’t hang out anymore.’”

Rage? I guess his consent is not a concern at all. He did not consent to pursuing things, and she went, by her own account, into a “rage.”

If I had to guess where this Love Connection went wrong, I would guess it was at the point where she met a guy for the first time and strongly implied he was a rapist, and she was ready — even eager — to call the police on him.

But that’s just me.

Back to the AC tale:

“Honestly, even if they’re supportive, even if they say all the right things, and really want to discuss my job, it makes me feel weird about hooking up with them,” says Sofie Karasek, a recent UC Berkeley graduate and co-founder of End Rape on Campus. (She’s also involved with the UC Berkeley lawsuit and has a large part in the campus rape-culture documentary The Hunting Ground.) “It’s like, ‘Oh, we were just talking about rape, and now we’re going to hook up.’ It’s just weird.”

Still, Keenan can attest that sometimes — when she’s lucky — her advocacy and her dating life are perfectly compatible.

There was one time, one guy, knowing what I did and what I talked about, he made consent part of foreplay,” she reacalls. “You know, very intentionally asking, ‘Is this okay? Is this okay?’ It was cute. It was great.”

You know what else was cute, sweetheart? When your little boy was bragging to his friends the next day how he played a game of “Mother May I?” on his way to a three-input night (if you don’t know what I mean by that you probably don’t want to know) from some idiot feminist. Sorry, but young guys are pigs. OK, that’s not fair to stereotype like that – we older guys are, too. OK, OK, not all guys are pigs. Some are sensitive and are fine with AC. Unfortunately for feminists, they already have boyfriends. Oh all right, already! Enough with the stereotypes – I don’t see any of my gay friends engaging in this stupidity, either. Thankfully, this wave of Radical Feminism is seeing long overdue  pushback, as Reason’s Brendan O’Neill shows (censorship mine):

It hasn’t quite reached the boob-baring, free-lovin’ level of Woodstock yet, but a sexual revolt of sorts is underway on campus. In Britain, some male students are refusing to attend their university’s sexual-consent classes, and I reckon this could be the first salvo in a sexual uprising against the gender-studies prudes now running (and ruining) student life.

George Lawlor, a student at Warwick University, started a firestorm when he wrote a piece for a student newspaper called The Tab, headlined “Why I Don’t Need Consent Classes.” Not only did he tell the “self-appointed teachers of consent” to “get off your f***ing high horse”—even worse, in the eyes of the raunch-allergic feminists who staff Britain’s students’ unions, he posted a photo of himself holding a sign saying: “This is not what a rapist looks like.”

To close out on what’s only a semi-tangent, stories like this make me eternally grateful that we have President Trump and not Hillary in the White House. Laws like this aren’t going to improve anything, but they will give another avenue for lawyers and therapists to invade our lives. And most importantly, implementing these policies will serve its most important function, and that’s providing jobs for otherwise unemployable Womens’ Studies degree holders. Items like this, the semi-monthly discovery of some new “rights” by the LGBQwerty community used to sue and ruin people’s lives, like letting males participate in female-designated sporting events, have been brilliant ways to keep Conservatives constantly on the defensive. With their hatred directed toward every word and deed Trump’s, no matter how trivial, finally we’ll have the Radical Left playing a defensive game for the first time in a long time. While the first month of the Trump administration has been far from perfect, I have to admit I’ve been far more impressed with his presidency so far than I ever imagined I would be. Hopefully his policies will have the same impact. I don’t need religious zealots spreading their misery over people who just want to enjoy Valentine’s Day in peace. Hopefully Trump will keep their misery focused inward instead toward the rest of us.