The Flaming Hypocrite Sits Out the 2016 Election 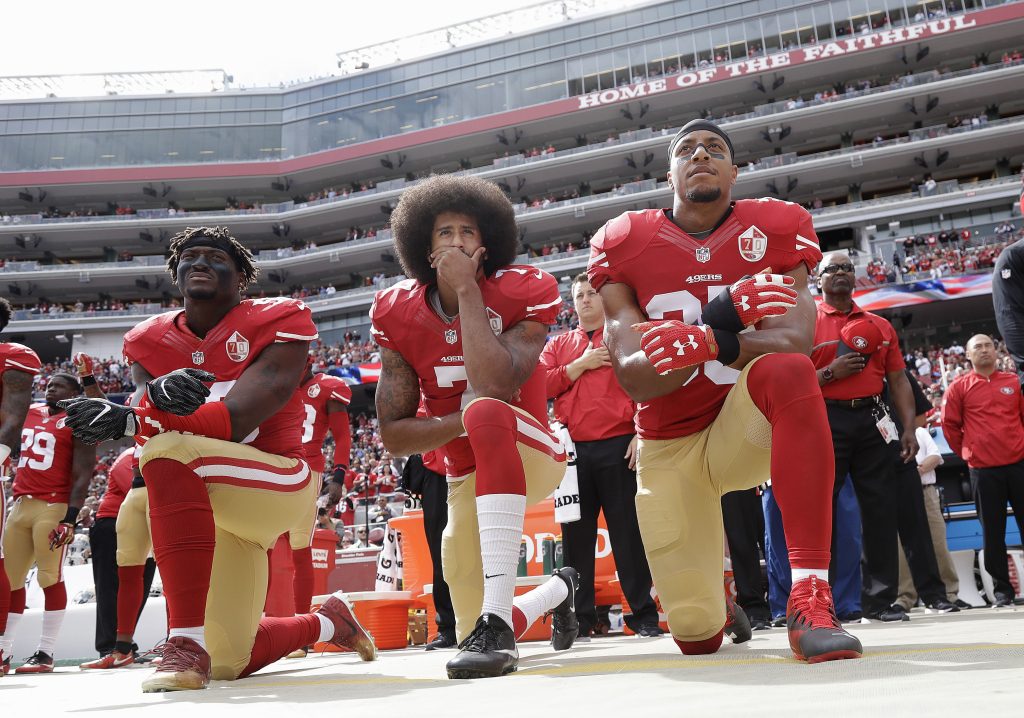 Yesterday morning, Stephen A. Smith on ESPN’s First Take went off on a tirade against Colin Kaepernick who either made a conscientious abstention from voting through non-participation- basically taking another knee over standing up; or he was simply lazy and disinterested. Either way, he undermines his own credibility to the political cause he came to embody. His explanation? Here you go:

Late Wednesday, Kaepernick spoke with reporters during a conference call from Arizona where the 49ers are gearing up for a game against the Cardinals, and he explained why he chose not to vote. He said that he didn’t approve of any of the candidates in the presidential race, which is why he didn’t spend much time worrying about who was going to win. He also said that he “really didn’t pay too close of attention” to the outcome of the election on Tuesday night.

“I’ve been very disconnected from the systematic oppression as a whole,” he said. “So for me, it’s another face that’s going to be the face of that system of oppression. And to me, it didn’t really matter who went in there. The system remains intact that oppresses people of color.”

As ESPN pointed out, the fact that Kaepernick didn’t vote probably shouldn’t come as a huge surprise. Back in September, he was very vocal about how he didn’t think that either of the two main candidates was qualified for the job of President of the United States of America. “To me, it was embarrassing to watch that these are our two candidates,” he said following the first presidential debate. “Both are proven liars, and it almost seems like they’re trying to debate who is less racist, and at this point, I was talking to one of my friends who goes, ‘You have to pick the lesser of the two evils, but in the end, it’s still evil.'”

Stephen A. Smith answers back:

I wonder if the rest of the NFL is content with making less money on future contracts and losing their endorsement so that Colin can make his statement. Yes, the NFL is being slowly diminished and it started with one moron. Sometimes these setbacks are permanent. I like many Americans don’t care; I watched the World Series, on the boob tube, and had a lot of fun. They still consider themselves to be patriotic Americans and I have become a baseball fan.

@Skook: @Skook:
It was actually something that was coming as to the NFL. I think it just needed someone to finally light the fuse and that moron was it.

As you can guess Skook, I am one happy human and Cub fan!!

@joetote: Oh that’s funny, people probably wonder why we were rooting for the Cubs.

Colin Kaepernick, via his girlfriend, has aligned himself with two quasi-Muslim movements: the New Black Panthers and the BLM.
His girlfriend seems to pull all his strings.
So, she’s the one with the real answers as to why he didn’t vote.
Someone ought to ask her.

ESPN lost over six hundred thousand paid subscribers in October alone. Say what you will about politicizing sports, but it certainly ain’t profitable.

How does that old saying go?

“You don’t sh*t where you eat”

@Skook: Baseball fan Better late than never-Skook–I’ve loved baseball since I was 5. Patriotism has got nothing to do with it. Are Cubs more patriotic than Indians? lol
Happy Birthday Marine

@Skook:
LOL! First I get the Stanley Cup thing and now the Cubs. One can say my sports dreams are almost complete. Now if I could only get my Derby winner!!

smith is a far left racist also .. look into his history. don’t watch the nfl nor will I ever

The 49ners are doing rotten this season good