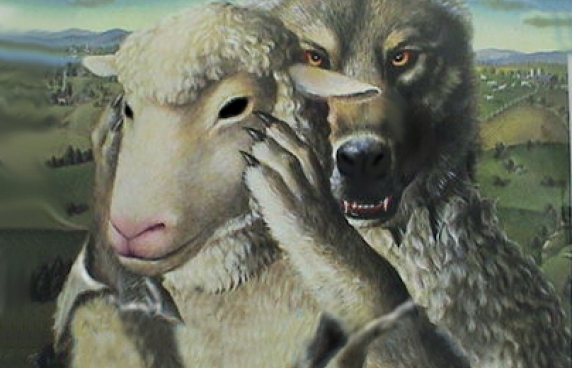 The aim is of course to portray opponents to the established parties and their pernicious social experiments as “right-wing extremists” thus framing them as hated Nazis and Fascists. It’s a devious tactic relying on the ignorance of the masses who’ve been brainwashed into believing that Nazism and Fascism are extreme right-wing ideologies. However, as I explained in a previous article, both Fascism and Nazism are of the left.

So who are the real extremists? On the outside, they’re nowhere near as obvious to spot as Hitler’s Nazis or Mussolini’s Fascists. Today’s dangerous extremists are far more cunning and much less obvious. Gone are the military uniforms and jackboots. Instead, they dress smartly in designer suits, they kiss babies and smile for the cameras and they claim to be champions of the people. They portray themselves as honourable, trustworthy moral crusaders fighting against oppression, discrimination, poverty and injustice.

Hiding behind this manufactured veneer of faux respectability lurks a very different picture. These self-proclaimed fighters against injustice who love to demonize those who have the audacity to oppose them as extremists are anything but honourable representatives of the people. Beyond the anaesthetizing narratives they’re determinedly conducting the most heinous crimes and deceptions ever carried out against a people. As these self-righteous devious authoritarians point an accusing finger at human beings whose only crime is the natural desire to preserve their identities and nations, they are:

1.Deceiving their people on an unprecedented scale. Since the end of the Second World War, the goal of Western ruling elites has been to establish one-world governance whether the people want it or not. In pursuing this long-term aim, power-hungry self-serving Western elites committed one of the grandest deceptions ever committed: The creation of what is now called the European Union. From the outset, this supra-national project was all about political union and the dismantling of Western European states. Not only was this concealed from the people of Europe, European politicians deceived their people into believing the aim was merely to establish a common trading block. And this deception was conducted using taxpayer money! Surrendering sovereignty then forcing people to pay taxes to two governments, one of which is entirely unaccountable, sounds like an extreme act to this author.

“Europe’s nations should be guided towards the super state without their people understanding what is happening. This can be accomplished by successive steps, each disguised as having an economic purpose. But which will eventually and irreversibly lead to federation.” – Jean Monet, Founding Father of the European Union

It’s a similar story with the United Nations. Equally as corrupt as the EU, the UN was sold as an organization to foster peace between nations after the horror of World War Two but is just another ever-growing leviathan pursuing global governance. That delegates from totalitarian states such as the People’s Republic of China, Qatar and Saudi Arabia, nations that have no regard for human rights sit on UN human rights commissions tells you all you need to know about how corrupt this nest of vipers has become. In a world where morality has been turned upside down, accusations of extremism levelled at the UN are conspicuous by their absence.

2.Stealing from the people, paying themselves inflated salaries and awarding themselves all manner of expenses. In Great Britain, the expenses scandal exposed the contempt Members of Parliament hold for the British people. In addition to claiming expenses for essentials such as cleaning a moat and renting pornographic videos, MPs were also playing the housing market using taxpayer money. One can’t help but wonder why the British people don’t regard this outrageous abuse of taxpayers as “extreme.”

In the United States, the principle of government of the people, for the people, by the people, has been abandoned. Half of congress members are millionaires and surprisingly, there are more Democrat millionaires than Republican. As George Orwell rightly stated, some animals are more equal than others. Corruption in Congress is rife and instead of serving the best interests of the people, US politicians now serve the interests of powerful corporations. The Third Way, a merger of state and corporate power pioneered by Benito Mussolini, is alive and kicking in the home of the free but don’t expect anyone to call it extreme. Only patriots who oppose this perversion of democracy are the real fascists.

3.Implementing punitive taxation then redistributing this wealth of the people to a gamut of foreign governments via foreign aid. Recipients of this largesse include rogue governments such as Pakistan, Sudan, Colombia, Palestinian Authority, globalist organizations especially the UN and the EU and the Islamic terrorist organization Hamas. Even failed, criminal banksters were bailed out by Western governments using taxpayer money. Welcome to corporate welfare! This was an act of Fascism committed in plain view but most Westerners were completely unaware of it. They didn’t seem to understand the message their rulers sent them either: If you fail, you pay. If banks and corporations fail, you pay. It’s like a game of Russian roulette but the gun is only ever pointed at the heads of the people.

Is bailing out failed, private – and in many cases, criminal – corporations with taxpayer cash acceptable or is it extreme? You tell me.

4.Refusing to protect and enforce borders and importing millions of aliens from the third world. Legally or illegally it matters not a jot. In doing so, Western governments are deliberately diluting the identities and cultures of their nations. The invasion is paid for by honest, law-abiding citizens who are paying for their own towns and cities to be colonized. Furthermore, these aliens will be allowed to vote and will of course vote for the elites who are importing them and handing them all manner of benefits. Such actions amount to the most appalling, may I say “extreme”? – acts of gerrymandering ever committed. And to add insult to injury, the elite “champions of the people and fighters for justice” impose punitive laws to enforce “positive discrimination” and put the interests of immigrants above the interests of the native population. But passing laws that demonize and criminalize your own people, disgracefully judging them to be guilty of the Orwellian thought-crime of racism by default isn’t extreme oh no. Patriots who refuse to cooperate with the surrender of their territory and with it their own gradual demise are the real extremists.

5.Waging a stealth war to dismantle the family unit. Sex education programs in schools promote promiscuity and pornography. The aim is to make marriage undesirable by encouraging women to place hedonism and a career above having a family. Feminist narratives are propagated in the mainstream media to portray men as women-haters who have abused women for centuries. Divorce is big business throughout the West with the goal being to remove the father from the family. Quickie divorces are now common, so much for the principle of upholding contracts. Instead of helping couples stay together, divorce laws make it easy for the family to be broken. This assault on the traditional family unit has resulted in such low birth rates, many Western countries are simply not breeding sufficiently to replace themselves and maintain the culture.

6. Aborting millions of healthy but unwanted babies. Eugenics, the practice of deciding who has the right to life is a alive and kicking in Western nations just as it was in Adolf Hitler’s National Socialist Germany. By allowing women the legal right to murder their unwanted healthy babies, the fighters against oppression and injustice have relegated these most vulnerable of human beings as “untermenschen.” Their only crime is to live in the womb of their mothers but because they’re inconvenient, they lose the right to be treated as human beings and can be disposed of in the trash. Since abortion was legalized in the United States in 1973, over 55 million babies have been aborted. Such mass murder of innocents isn’t extreme though, the real extremists are the ones who oppose this holocaust of the innocents.

7.Importing millions of Muslims into their nations and are demanding the people tolerate Islam, an extremist religion which has waged non-stop jihad against unbelievers across all faiths since 622. It’s one of the greatest betrayals ever committed in Western history and the consequences have been beyond dire.

Islamic practices such as women being forced to wear hijabs, female genital mutilation, child brides , honour killings and halal ritual slaughter of animals all common in Islamic states have now been imported into a civilized society where these inhumane, cruel practices had ended long ago. It’s important to remember that the first victims of Islam are Muslims, especially women and girls.

Devout Muslim males emulating the perfect example of their prophet have brought a rape epidemic to Europe with gang rapes of infidel women being one of the most diabolical strategies of Islamic jihad. Yet those self-aggrandizing elites and their lickspittle lackeys in the media – who claim to fight for women’s rights and equality of the sexes – went to great lengths to cover up these heinous crimes against women. In the British town of Rotherham, it transpired that over 1400 girls had been raped by Muslims and that the government, police and social services had known about it and covered it up for a decade.

What’s that you say? Those responsible should be accountable for betraying those girls? Come on, what are you, some kind of “right-wing extremist?”

As if that wasn’t enough, after the terror attacks on 9/11 in New York, on 7/7 in London, and more recently in Paris in January and November 2015, deadly attacks carried out by jihadists fighting in the cause of Allah that slaughtered thousands of infidels, still the elites who are just as culpable for these atrocities dare to call those who correctly assert that Islam is not a peaceful religion “Islamophobic extremists.” By deceiving their own people about the reality of Islam, I assert they are knowingly and deliberately placing them in grave danger. In a sane society, those committing such a betrayal would be regarded as dangerous extremists.

You’ve just read seven examples of how the ruling elites throughout the West are deceiving their own people. I could add many more, not least the deceptions deployed by Western governments and the mainstream media to justify illegal, murderous wars in Serbia and Iraq. I will leave these deceptions for another time as there isn’t space here to cover them.

Far from being decent, honorable champions of the people fighting for justice and equality, the ruling elites are wolves in sheep’s clothing. They’re the new “do as we say, not as we do, we know better than you” self-serving authoritarians who believe the people exist to serve them. They see human beings as guinea pigs and their nations as laboratories fit for conducting pernicious social experiments to mould society as they want it. They certainly don’t exist to serve the people who they deceive with impunity.

Yet somehow the people of the West do not regard the devious politicians and media charlatans as “extremists” and allow themselves to be deceived over and over again. One hopes that one day soon, they will wake up to their own betrayal committed by the real and very dangerous extremists hiding in plain view.